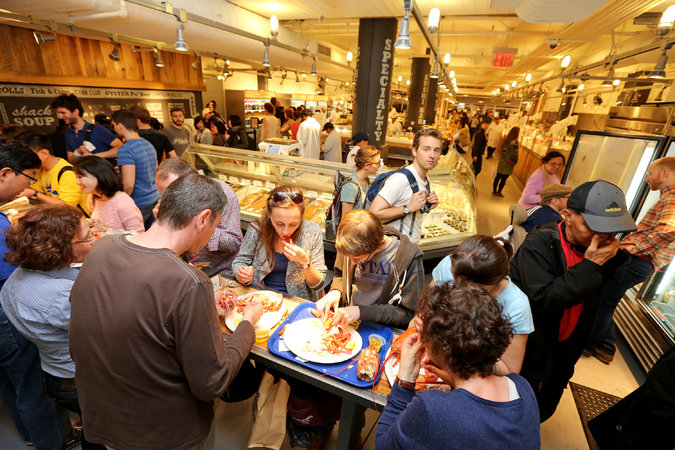 Visit the cathedrals to food where delectables from the world over are on display. The gross over production and high price of food in western markets are being demonstrated in a new phenomenon: Food Halls.

The greatest concentration of people with money is in big cities like London and New York. And they are prone to eat two, three, or even four or five times a day, often at the high-priced end of the food trade. Why shouldn’t our “no-governor, non-stop” food system be draining resources and exploiting the food production base worldwide in order to market to them?

Even as technology improves, the game is to get more and different food items to the citified marketplace, like Eataly, as fast as possible and reap the greatest profits possible for a powerful few. Eataly – the largest artisanal Italian food and wine marketplace in the world – covers 42,500 square feet. And everybody is in the game because it is a game of money, not food.

On the surface it may look good, offering attractive fare and more choice but without intelligent control, this type of accelerated food service will cause the depletion of resources and even serve to make people ill by encouraging them to overeat. In short, it will starve the outliers (those low paid workers supplying the food products), exhaust the resource base, fill waste dumps to over-capacity, pollute our oceans, and threaten human populations in both urban and rural landscapes. It turns food into a commodity, making it nothing more than a manufactured product with the purpose of generating a profit.

High-end food is a growth economy completely without bounds; a money-driven economy operating off the top of new technologies, processing methods, and transportation routes and cheap labor in developing countries. As a result, social pathologies like war and genocide that used to take years to develop are now developing in months.

Whereas some see these food halls as exciting, I view the whole enterprise as encouraging gluttony and, ironically, accompanying starvation in the undeveloped world, on top of an over-heated planet. It’s time to say halt!

It is high time for us to hold back from the “feeding troughs;” to take time to think not only about what we are putting into our mouths but the environment in which we are eating, the time we take to enjoy our meals, and the people we share them with.

In honest reflection, it’s all about slowing down isn’t it? And taking control back where it belongs before we all become addicts to a sick system functioning in a very sick society. Too much!