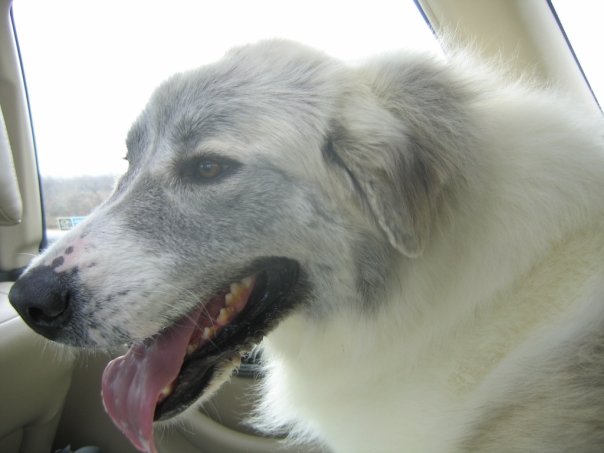 The continuing saga of Poohbah, the Snow Queen: we took her to visit our vet. At 63 pounds she definitely needed to gain weight before we could have her spayed.

We set out to fatten her up, along with giving her medication for the Valley Fever. $148 for the first 100 pills! She was taking 1½ pills per day. By the time the refill was needed our vet had located a less expensive source – in the $90 range. Eventually she found a source for under $50!

Our weight-gain program continued, along with periodic visits to the vet to be weighed and checked over. Her “grubby” teeth and gums were looking better, her general health was good, and she was slowing gaining weight.

Finally, she had gained 10 pounds, and at 73 pounds the vet felt she was in good enough condition to be spayed. And shortly there after that was accomplished.

By early May she was fully healed and doing great, but she still had lots of bad habits – such as joyfully racing toward you at top speed and leaping straight up right in your face! For me with my badly deteriorating left hip, this was more than a bit scary, but Poohbah was exuberantly joyful and that was her way of showing it. A visiting niece remarked that she had never seen such a happy dog!

On a beautiful May morning the sheep were grazing peacefully on pasture, the bottle lambs been fed, and it was time to feed the dogs. TarBaby was right there waiting to be fed but there was no sign of Poohbah. She often chased coyotes at night, but she was always back home in the morning. However that morning she did not reappear.

I periodically whistled and called for her, but to no avail. I went out of doors making one more attempt at calling her, when I heard the phone ring. By the time I reached the phone the answering machine had taken the call, and I had a message from “Home Again” (an organization that matched lost dogs with their owners) that my dog Poohbah was at the Caledonia Livestock Auction Market. Somehow she had made it to Caledonia on Highway 44.

Fortunately Poohbah had been wearing a collar with a Home Again tag giving the Home Again number to call to report the lost dog’s location. The person on duty at the Livestock Market had looked at Poohbah’s tag, made the call to Home Again, and they in turn relayed the dog’s whereabouts to me. So once again, into the breech!

I jumped into my trusty truck and drove the two miles to the auction market, where Poohbah was delighted to see me and we returned safely home.

Apparently during the night Poohbah had chased coyotes up across our front pasture and out onto Highway 36 near where it intersected with Highway 20. And she had followed Highway 20 to where it crossed Highway 44. The livestock auction market was near by and Poohbah stopped there.

All turned out well but life would continue to be a series of misadventures with Poohbah!

With the sheep, dogs, cats, gardening, and yard work I was having a busy summer. Sean too, was up to his ears in contract fencing jobs, along with his regular mechanic’s job at Caledonia Haulers, so the time flew by.

There was a family reunion in early August at a resort in Branson Missouri, but our lives were too busy and complicated to get away. So we had to skip the reunion that year.

On August 17, southeast Minnesota had a record rainfall of 17 inches in a 24-hour period, causing widespread flooding and devastation throughout the area. Roads and bridges were washed out, one person perished when the road he was on collapsed and was swept away. Homes and buildings were destroyed, fences washed out, and livestock died in the flood. We were fortunate to be living on a ridge and although we had some damage, it was minimal compared to what the people below had suffered.

Good friends also lived on top of another ridge; they had a steep 1½-mile driveway leading to the county road below. Their driveway was completely demolished in three different spots. They were thankful to have friends they could stay with for some time while not able to go home.

In October I received a welcome $1000 check from my old friend Levi Petershein, an installment payment on last year’s purchase of ewe lambs. In November he sent another $500 check to pay the lambs off in full. Levi is so happy with his flock, and he is starting to sell breeding stock to other Amish farmers and is doing very well.

In December, I finally had cataract surgery in one eye and would have the other eye done in January 2008!