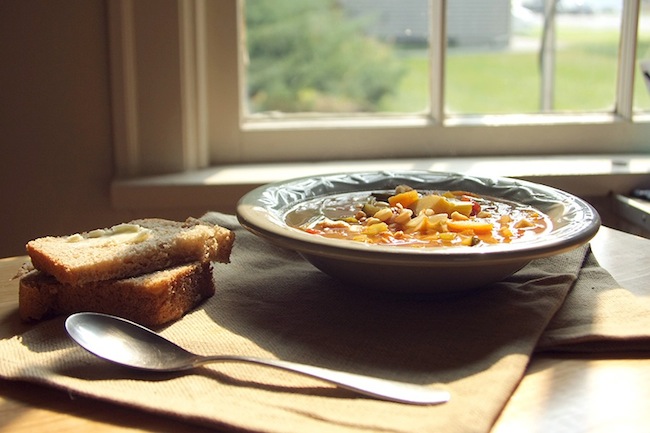 (With special thanks to Lewis Carroll, Alice’s Adventures in Wonderland)

It’s worthwhile examining our dependence on canned goods during a season when the lack of sunshine coincides with a shortage of fresh produce at the market. The days are shorter and colder, and popping open a can of soup is just too easy when you need a quick, hot meal. But the difference between fresh and canned extends far beyond the method of preparation. If you consider the quality of the product and the potential side effects of its packaging, you might find that these so-called convenience foods actually pose an inconvenience for your health.

There’s a funny sort of separation that exists between raw foods and their canned counterparts. I’m sure there’s at least one type of food that you’ve only ever eaten from a can… maybe it’s pumpkin or sweet peas; how about bamboo shoots and baby corn? Too often we default to the canned version, even when the fresher food is available and easily prepared. Beans can be soaked, tomatoes peeled and diced, ears of corn cooked and the kernels shaved off; I tried it once and have not gone back to canned corn since. It’s a matter of taste, but I don’t think many would argue with me. How does Campbell’s soup compare to your mom’s chicken noodle?

If the terms “salty” and “mushy” came to mind, you can probably blame the canning process. Flavor and texture is lost when the cans are heated to high temperatures for a prolonged period of time; to compensate, manufacturers add more salt and fat. It’s also likely that the process results in a higher loss of nutrients, although most vegetables lose some nutrients anytime they’re cooked.  (Read more here)

If you’re not convinced that the superior taste is worth a little more effort, how about the fact that you’ll also be avoiding potentially harmful chemicals that leech into your food from the lining of tin cans? There have been some alarming studies on the effects of the industrial chemical bisphenol-A (BPA), most commonly found in plastic containers but also in more than 50% of common canned goods.

In March of 2012 the FDA considered a proposal to ban BPA from our food, but the proposal was rejected, perhaps due to a new study that suggested our bodies can metabolize the chemical before it enters our bloodstream. I’d still rather play it safe; if you want to know more, I found that this article best summed up the issue.

Now, you might not be able to eat both fresh and local all year round; even fresh becomes difficult in some places during the winter months. Take advantage of the harvest while you can, whether that means canning, freezing, or simply enjoying what fresh produce the season has to offer. And you can still enjoy hot soup in the winter – here are a few tips on how to do it without using canned beans, vegetables, or ready-made soups. (Of course if you can your own produce in glass jars, you can use those without worry of BPA, sodium, or preservatives).

About Bisphenol A (BPA) and here.

How much BPA exposure is dangerous?