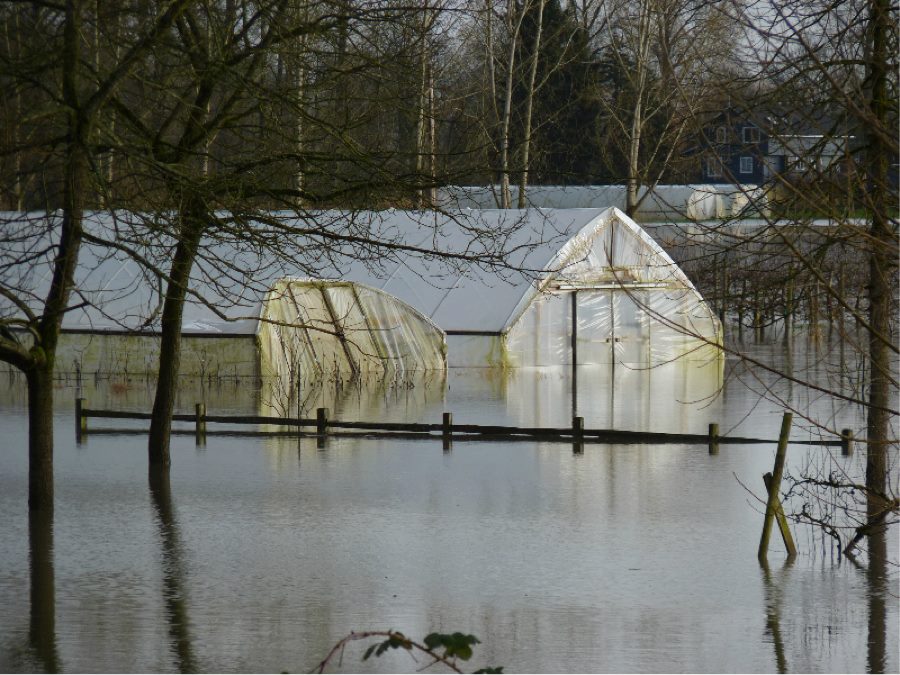 Editor’s Note:
While this article appeared in 2007, the problem of flooding in the Snoqualmie River Valley is still looming large. Erick Haakenson, Jubilee Biodynamic Farms, told GoodFood World today that the roads and his drive were flooded and there would be no traffic in or out of his farm.

Seattle area consumers are blessed with a small amount of remaining farmland just minutes away. Rich, productive farmland on the banks of the Snoqualmie River.

The Snoqualmie drains water from the surrounding hills, many of which are covered with expensive homes built in the last 20 years. Construction in the watershed has removed forests, increased the amount of “hardscape,” and changed water patterns.

This article written by Haakenson nearly 7 years ago gives voice to concerns and fears that are very much on his mind today.

(Copyright by and reproduced with permission from PCC Natural Markets.)

Flooding farmers out of the Snoqualmie?

As one who farms in the shadow of the Seattle metropolitan area, it’s gratifying to hear the mantra “local and organic” with increasing frequency in the media and on the lips of consumers when they think of food.

The demand for local and organic produce is so strong that it hardly can be met by local growers.

The single largest and unspoiled piece of agricultural land in King County is the Snoqualmie Valley Agricultural Production District (APD). It would seem that those of us who farm in the APD and grow organic produce should have before us a bright future. Unfortunately, that may not be the case.

Farmers in the Snoqualmie Valley APD, including each of the three farmers selected to be stewards of the Ames Creek Farm (wisely purchased with funds from the PCC Farmland Trust), share a common awareness that although we have the potential to supply a great deal of the nearly insatiable demand for local and organic food, the future of farming in our valley is dismal. Why?

The answer, in a single word, is flooding. Many say that the valley always has flooded. That is true. But in just 16 years, we who farm the valley have witnessed each of the four largest floods in recorded history.

This is not normal “low-land flooding” often experienced in fertile river basins, but catastrophic floods that devastate crops, kill animals, erode soils, ruin equipment and supplies, and put human life at risk. Those who monitor flooding trends tell us we can expect more flooding and worse flooding — perhaps much worse.

The term “natural disaster” often is used in connection with flooding. Those of us who farm in the Snoqualmie Valley have borne the “disaster” portion of this locution, but we have a hard time understanding the “natural” part.

What’s natural about denuding hillsides, building thousands of homes and businesses on paved-over soil, and draining the entire project with multiple tight-lines for miles unimpeded into the Snoqualmie River? What’s natural about blasting away thousands of tons of rock from the banks of the Snoqualmie River above so the excess water will “swish” down to the APD more quickly during flooding events?

What’s natural about the levies and dikes built to protect homes and businesses in the lower valley that send additional water to the unprotected APD? And what’s natural about similar highly elevated dikes and levies in Snohomish County that protect farmlands there by forcing floodwater back into our ADP?

Please don’t jump to the conclusion that we think these things should not have been done. We’re glad the cities above the falls seem to have solved their flooding problems. We’re glad the residents of Snoqualmie Ridge, Redmond Ridge, Trossachs and all the other developments that tight-line directly to the Snoqualmie River don’t have to deal with their storm water.

But there’s something that we who farm the valley need to say: we’ve become the dumping ground for the storm water from all the aforementioned cities, businesses and homes. We’ve given tons of flood relief. Now we need an inch of relief ourselves.

These floods are political floods, not natural disasters. As such, if we value agriculture and local organic produce, we need to take steps to provide political remedies for the flooding we have caused. If we don’t, agriculture in the valley will not survive.

The U.S. Food and Drug Administration has determined flood-inundated products must be destroyed. Meanwhile, our floods are coming earlier in the fall, later in the spring, and at unprecedented levels both times. Something has to change. It doesn’t matter if the fertile soil is paved over with concrete or flooded over with water. It’s equally unavailable.

The long-term solution to the potential demise of agriculture in the Snoqualmie Valley Agricultural Production District is flood control. We don’t need to eliminate flooding to farms, but we must provide some counterbalance for the “unnatural” aspects of it — the developments, the strip clearing, the tight-lines, and the physical alteration of river channels. When added to the impacts of climate change, this unnatural flooding is about to put our area’s best source of local and organic food out of existence.

We ask you to encourage the King County Council to convene a panel of experts to look comprehensively at options to manage flooding in this valley. The panel should include farmers, flood and climate specialists, developers and forestry experts. Call the county executive and council at 206-296-1688 and let them know why it matters to you.

Read this article as it originally appeared here.