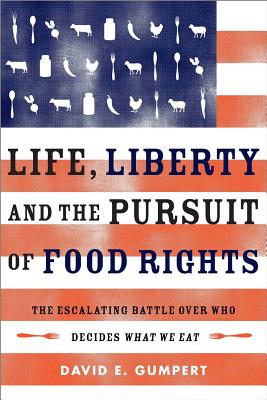 Life, Liberty, and the Pursuit of Food Rights: The Escalating Battle Over Who Decides What We Eat, David E. Gumpert (Chelsea Green Publishing Company, 2013) 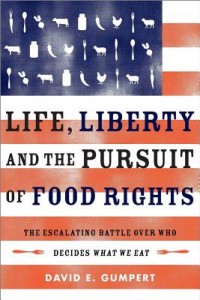 Who is it that decides what you get to eat? In reality, it’s not a decision you actually get to make for yourself.

Concentration of production and processing in the hands of fewer and fewer large companies has resulted in more control over what is grown, processed, and packaged for sale. For instance, in each of these categories just four companies, and in some cases only three, control a large share of production:

And who decides what crops are to be grown? Only six companies control nearly all the global commercial seed sources; Monsanto controls more than any other company?

As for what ends up on the grocer shelves? Just four companies – Walmart, Kroger, Safeway, and Supervalu – control about half the grocery sales across the country. In some markets, their control is even stronger.

The decisions to allow food products to be sold also rest with the US government. In his book, Life, Liberty, and the Pursuit of Food Rights, David E. Gumpert, looks at government regulation and food safety controls that limit consumers ability to buy food directly from the farmer, as did their grandparents and great-grandparents.

Read more about the concentration of the food industry in Networks, Power and Dependency in the Agrifood Industry.