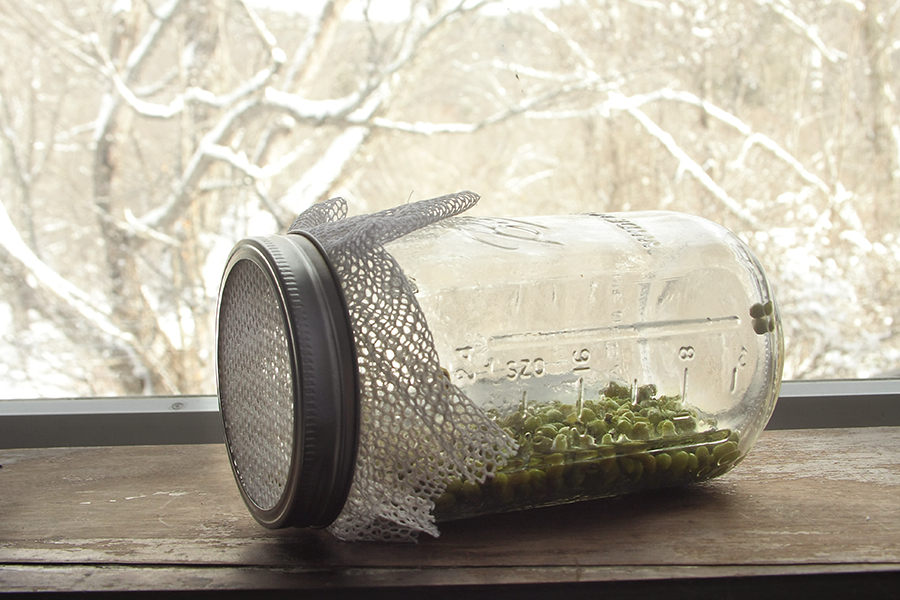 I am by no means an expert on sprouting. There are whole webpages dedicated to the task, online forums full of people sharing the outcomes of their home-kitchen experiments – from novice sprouters like me to expert enthusiasts. I was thrilled to find that the sprout community is just as active as that of the bread bakers and cheese makers. More proof that people are taking an active role in their food – and with sprouts, it’s literally seed-to-plate. 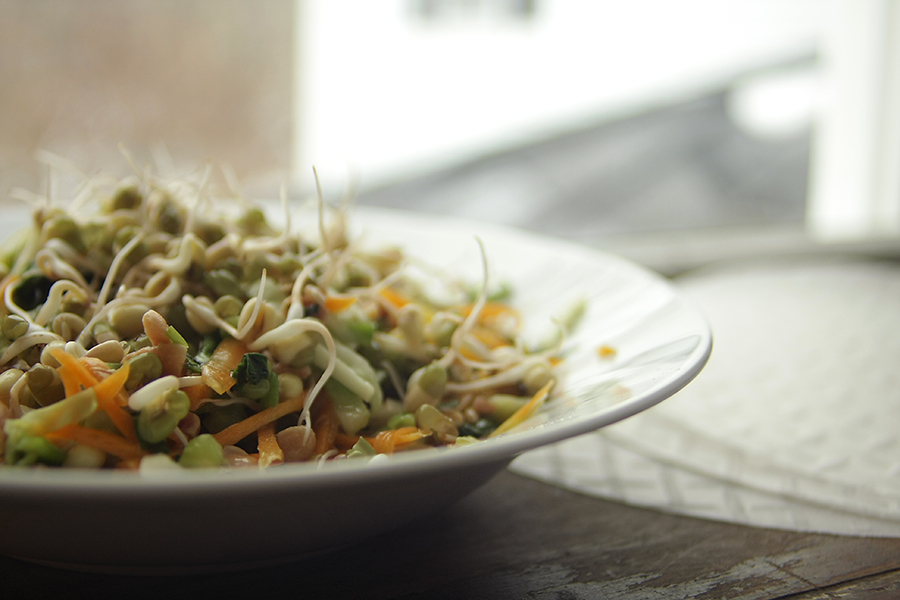 But friends tell me they can be dangerous to eat (and because of the risk, difficult to find in stores). This was news to me – we’d enjoyed sprouts from the co-op back home, which were locally produced and came in a few different varieties. We used them on sandwiches and salads, and in stir-fries and spring rolls. The only problem was that they went bad quickly in the fridge, and try as I might to re-use the baggies they came in, the packaging often ended up in the trash.

I told myself I would start making my own sprouts – it couldn’t be that hard, right? Didn’t Ian’s mom do it in a jar or something? We even won our own sprouting tray at the co-op raffle, but it sat on top of our fridge for a couple months and made it’s way to Goodwill shortly before we moved out. (I meant it no offense but we had to fit everything in the back of our truck and that thing was a total space-waster.)

More recently I revisited this idea when a friend told me about her recipe for sprouted bread, which I would absolutely love to try, but first I need to make sprouts. She sent me home with a few tablespoons each of some mung beans, garbanzo beans, and red wheat berries, along with a sprouting tray and a water filter. The stars were aligned… it was time to sprout. But why the water filter?

Apparently the biggest problem with sprouts is that the environment necessary to help them grow is one that’s also conducive to bacterial growth. They require repeated soakings at a warm temperature, in a humid container away from direct sunlight. If any bacteria are present in the seed or the water used to soak it, odds are they’ll thrive and end up in your stomach. There have been a number of highly publicized “sproutbreaks” in which commercially produced sprouts were linked to illness and (less common) death.

Contaminants can come from your water or from the seeds themselves. The exact culprit is often difficult to pinpoint, and near impossible to prove when the sprouts responsible are long gone; illness can take more than a week to kick in. One thing’s for sure though – the vast majority of these “sproutbreak” incidents can be traced back to commercial (and non-organic) sprout operations.

To date none of the outbreaks in the US have been traced back to organic farms (although it’s likely an incident of mass illness in Germany originated at one. I am not sure about organic standards in Europe). In the past we’ve had scares with commercial eggs, hamburger meat, even spinach. These large-scale operations process food in large batches, often combining foods from many different and far-reaching sources. Their products are widely distributed and that’s really what makes large outbreaks possible… It wouldn’t be an outbreak if it didn’t reach so many people. Another reason why it’s good to examine the source and support local! 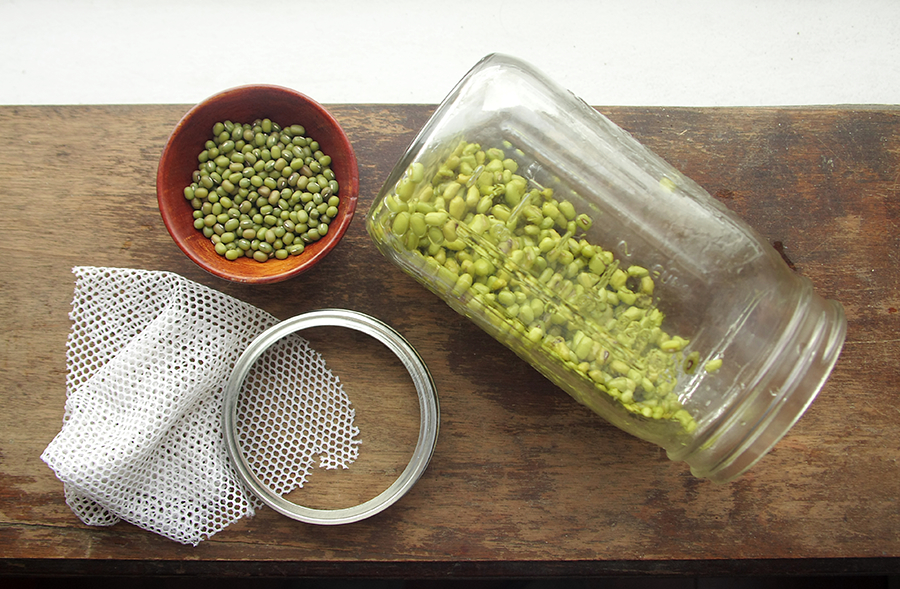 As I prepared to sprout my own for the first time, I was largely unaware and untroubled by these thoughts.

The first time I soaked mung beans, I used filtered water and a sprouting tray. But I soon found that neither was entirely necessary. To do it at home, all you need is some kind of filtered container (a colander, strainer or a glass jar with some mesh or breathable cloth over the top) and clean water. We’re lucky to have fresh spring water coming out of our tap here at the farm, but a filter is a good idea if you’re not sure that your water is pure.

The first step is to let the beans soak overnight in a few inches of water. Start with a few tablespoons… they’ll sprout out to twice their original volume.

The next morning, drain the soaking water. Fill the jar again with enough water to cover the beans and swish around a few times. Drain again, then set the jar on its side and shake it a little to disperse the beans. I try to give them as much surface area as possible (a tray may be ideal if you plan on making them in large quantities). 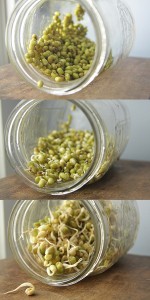 Rinse the beans at least once a day, twice if you find the time. You’ll see them start to sprout – here’s a picture I took on day one, day three, and day five.

At day five they’re perfectly edible, but still quite crunchy. We made them into spring rolls but I think they might have been perfect in a hot soup or stir-fry, which would soften them up a bit.

A few more tips: keep the jar out of direct sunlight, and room temperature is fine. They’ll sprout in colder rooms too – our kitchen has been at about 60 degrees all winter – but the process might take a little longer.

We’ve made sprouts several times now with delicious success and none of the nasty illness associated with eating them raw. I do know that the seeds I was given are organic and that our water is clean. I feel safe making them at home with this method, but I’ll think twice now before eating them raw at a restaurant.

Even organic sprouts purchased at the store may be soaked in a strong hypocholorite solution… what the team behind Sproutpeople.org calls “the equivalent of one part household bleach to one part water.”

It doesn’t appear that this process is actually regulated and enforced by the FDA, but it comes highly recommended and research seems to indicate that most sprout growers do comply, even those with the word “organic” on the label (but not USDA certified organic).

It makes me wonder about those sprouts we used to get back home… were they certified organic? Could they have been soaked in a hypocholorite solution? I hadn’t considered it before; I was just happy to be supporting local growers and putting fresh food on my plate at the same time. But we were a small, tight-knit community who really cared – if I were still living there, it would be simple for me to ask find out about their growing practices. I can’t say the same for larger grocery chains or food cooperatives.

I do feel that sprouting your own from organic seed is a safe bet. You can personally oversee the rinsing of your sprouts in clean water, make them in small batches and eat them fresh at every meal, and rest assured that they haven’t been soaked in a bleach solution. And if that’s not enough to ease your mind, nobody ever said you had to eat them raw. Toss your sprouts in a hot soup or a stir-fry to fully remove any potential bacterial threat.

What are your experiences with sprouts, and what do you think about sprout safety?

Here are some of the websites I visited recently while learning all about sprouts. I find most of them credible, but all of them interesting and worth a read (including the comments).

Elusive Explanations for an E. Coli Outbreak
More Stomach-Churning Facts about the E. Coli Outbreak
Are Sprouts Safe?
Can Technology Rescue the Sprouts Industry?
Growing Sprouts in Retail Food Establishments
Why Raw Sprouts May be the Riskiest Food in Your Grocery Store
Sprouts are Safer Than They Want You to Think!
Boycott Whole Foods
Chlorine Calculations for Sprouts