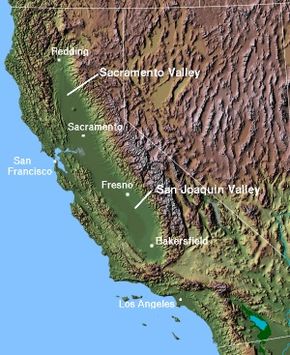 US industrial agriculture has turned the Central Valley of California from a natural paradise of biodiversity into a desert waste land. It’s sad for everyone. The Valley was one of Americas most beautiful places; today it has become a demonstration of the worst agricultural practice in the US over time and a standing model of bad public food policy.

As we siphon more and more water out of the aquifer under the San Joaquin Valley, a 1200-square mile bowl of land is sinking; so fast that from 2008 through 2010, it sank 3 feet – 1 foot each year. And continued dry conditions will mean even more water will be needed.

The Central Valley is still where a lot of urban people get their food, especially produce, and even organic produce. And now, with climate change and continued corporate abuse, this major source of fresh fruit and vegetables is drying up. Similar centers of food production in Texas and Florida are also deteriorating along the same lines. As a result, the major industrial food production complexes are moving even further away, into Mexico and Central and South America, even to Africa and Asia.

Meanwhile, high tech, artificial “growing factories” employing hydroponics and artificial lights are being tried in northern cities. In every effort to keep up with food demand, diminishing natural resources, and a worsening climate – erratic and threatening – the reliance on fossil fuels and cheap labor is increasing and there is more waste. But carbon emissions are the cause of global warming — so what we have here is the snake devouring its own tail.

What is driving such an insane food system? Not hard to see, it is the corporations and money managers. And how do they propose to solve the big problems like fresh water depletion and desertification in the California Central Valley? You’ve guessed it! More expensive engineering and technology – after all, that’s the only way to create wealth in our current Western society.

In fact, the present coping mechanisms and gross technological promises of modern industrial agriculture are all driving to one outcome: the rapid extinction of all life on the planet. Big words. Not when one considers the rate at which our climate is now changing habitats, including human habitat, and causing the real depletion of resources – the wasting of all our natural capital – and the worsening abuse of workers world wide.

Hard realities; what are we to do? Exactly what we are doing at GoodFood World and dozens of other similar grass-roots organizations : fighting to build resiliency back into our local food base; mapping and dedicating land and water to regional and local food production; rebuilding collaborative distributional networks; retraining young farmers, processors, distributors, and food service and sales people; and educating the public. At the same time, rediscovering a responsible local politic that serves rather than exploits its people, all working together to meet the world climate crisis and restore our health and sanity and common ground.

Can we do it in time?