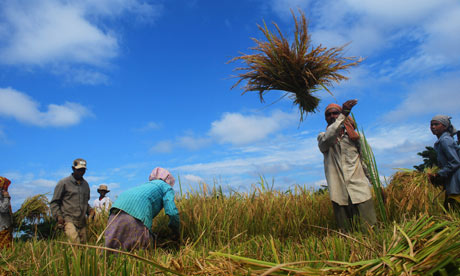 We keep saying this but, of course, the “big boys” don’t want to hear it: the wake-up call is being sounded!

In fact, Big Food and Big Ag (Monsanto, et al) are covering their ears. La, la, la – no one wants to listen!

And why? That’s the way our economic system operates – “big” is rewarded. But only at a rapidly increasing social and environmental cost.

Many small, diverse, well-connected operations – collaborative and distributed – is the way to go. Connection comes through high-tech communication and alternative energy use; collaboration is manifested through cooperative distribution.

And, on a global level, we must restore local culture by reducing the influence of imperialist powers.

A recent piece that appeared in The Guardian, Food crisis fears prompt UN wake-up call to world leaders, reminds us again that big, industrialized, monoculture agriculture has failed to provide enough affordable food where it is needed, while environmental damage is “mounting and unsustainable.”

The 2013 Trade and Environment Review, from UNCTAD, the UN trade and development body, calls on governments to “wake up before it is too late” and shift rapidly towards farming models that promote a greater variety of crops, reduced fertilizer use and stronger links between small farms and local consumers.

Governments in rich and poor countries alike should renounce their focus on agribusiness and give more support to small-scale, local food production to achieve global food security and tackle climate change. Persistent rural poverty, global hunger, population growth and environmental concerns must be treated as a collective crisis, argues the report, which criticizes the international response to the 2008 food-price crisis for focusing on technical “quick-fixes.”

A key conclusion of the report, titled Wake Up Before it is Too Late: Make Agriculture Truly Sustainable Now for Food Security in a Changing Climate:

Most important of all, despite the fact that the world currently already produces sufficient calories per head to feed a global population of 12-14 billion, hunger has remained a key challenge. Almost one billion people chronically suffer from starvation and another billion are malnourished. Some 70% of these people are themselves small farmers or agricultural laborers. Therefore, hunger and malnutrition are not phenomena of insufficient physical supply, but results of prevailing poverty, and above all problems of access to food.

Enabling these people to become food self-sufficient or earn an appropriate income through agriculture to buy food needs to take center stage in future agricultural transformation. Furthermore, the current demand trends for excessive biofuel and concentrate animal feed use of cereals and oil seeds, much too high meat-based diets and post-harvest food waste are regarded as given, rather than challenging their rationale.