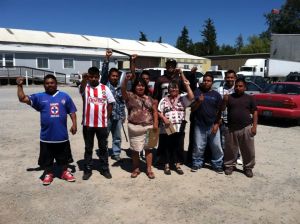 Burlington is not a very old city center and got its start in 1902 as a logging camp. Today the small town of 8,380, located in the Skagit River watershed north of Seattle, does count with a prosperous fruit and vegetable agricultural industry. Of course, the industry relies on mostly migrant families for farm labor. This is especially the case during harvest work and strawberry crops present an opportunity for workers to seize the current condition of ‘labor scarcity’ and high demand for skilled pickers during harvest time to organize for their workplace rights. And that is exactly what has happened in the State of Washington, and not in the Yakima or Wenatchee valleys but on the western side of the Cascades where peri-urban farming is increasingly big business.

The strike that started here in early July focuses on the Sakuma Brothers strawberry operation outside Burlington. Without harvest workers the strawberry fields would go to waste. According to Richard Sakuma, “We can grow the best crop there is, but if we don’t have the people to harvest, we’re pretty well sunk” (Holmes 57).

According to a recent activist blog post at Káráni: Escribrir y Volar, the workers understood this double bind – that they too would be without a means of livelihood if the produce perished in the fields and there was nothing left to harvest:

The Sakuma Worker’s Rights Committee agreed to return to the fields on July 16, 2013 after a six-day work stoppage. The President of Sakuma Brothers Farms, Steven Sakuma, offered to pay the pickers $3.75 per flat instead of .30 cents per pound. The workers were not thrilled, because it was still a low piece rate, but explained that with this rate, “el trabajo es mas calmado,” that the pace of work was not as difficult to keep up, referring to the speed up that .30 cents per pound resulted in with the particular strawberry field in question.

The Sakuma workers’ campaign is an example of a classic worker-capitalist conflict: The piece-rate system that was being imposed on the workers at Sakuma is an age-old practice used by capitalist producers and it is designed to control the productivity of workers. This is done with the “piece-rate” that requires the worker to accelerate the pace of and intensity of harvest labor expended to receive the bare minimum payout. The producer most often uses this strategy of “Taylorism” or scientific management to make workers compete against one another by rewarding the rate-busters or workers that set the upper limit of the productivity curve. This promotes horizontal conflict between workers and allows the capitalist to deflect or suppress “vertical” or bottom-up conflict. The point is to use piece-rates not just to exploit “uncondensed” or “raw” manual labor more efficiently but to divide and conquer the workforce and this is what part of the workers’ struggle at Sakuma appears to be focused on.

The workers’ current proposal to address this system is focused on a “hybrid” model that guarantees at least the minimum wage while implementing a participatory or worker co-managed approach to the setting of future piece-rates. Again, the Káráni report:

As part of this agreement, the [workers’] committee was able to convince Steve Sakuma to change the process under which future piece rates are determined, by allowing three pickers of varying abilities selected by the committee to join the head supervisor on the field test which determines piece rate for a particular field the day before it is to be picked. These three workers are to be paid the state minimum wage for a a full day’s labor and based upon their production a piece rate will be established by their supervisor. The pickers will then have the ability to discuss the piece rate and have the option to opt out of picking a particular field without reprisal if they believe the piece rate is too low. Steve Sakuma agreed to draw up the process in writing and to have the policy posted at the labor camps for future migrant workers who may not have been present during negotiations. 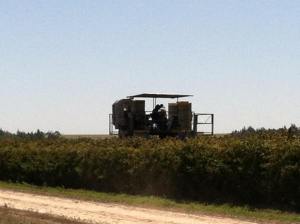 This strike has the makings of an honorable tradition in which the strike committee refused “an initial offer of a full day’s work for 100 people based upon the partially completed field. Instead, they negotiated for a partial day’s work for all 200 workers they were representing.” The Sakuma family has also shown signs of softening their approach and engaging the workers in pursuit of a more equitable and participatory co-management approach. According to the post in Káráni:

In 2004, when family members and elders of some of the current pickers had a work stoppage around very similar concerns, Richard Sakuma had explained that his goals in relation to the farmworkers was to be, “fair and consistent.”(58) Steve Sakuma’s younger brother admitted that without the fair treatment of farmworkers, their farm would not be able to survive. It is clear from the flow of the negotiations that the Sakuma executives understand that their future success is bound with these farmworkers, moreso than vertical integration or mechanization.

I agree with the Káráni post that “the direct negotiations taking place at Sakuma Brothers Farm are unique and historical.” It has been nearly unheard of for farm workers to gain any type of remedies to address concerns of workplace management or workplace democracy in Washington State or elsewhere. This is challenging enough and the lack of a collective bargaining or other binding agreement further complicates the effort.

However, I do agree that: “when farm workers and growers work together, and change the process to include as opposed to exclude collaboration, the possibilities are endless.” Indeed, this could be a first step toward eventual worker ownership and self-management of the operation, especially if future Sakuma generations do not commit to continue to farm. That would be another welcomed example of the trend involving a transition from migrant farm worker to cooperative farmer.

In solidarity with this important workers’ autonomy movement, I gladly present a message from the Sakuma Worker’s Rights Committee, and will be providing updates as this movement unfolds.

A Message from the Farm Workers

We appreciate the respect that the Sakuma executives have given us during these negotiations and we want to take this opportunity to express our gratitude for the support that the solidarity community has given us and ask that you continue to support our continuing struggle for dignity.

Solidarity statements can be forwarded to Community to Community Development by e-mail at decomunidad@qwestoffice.net.

Farm workers had been on work stoppage for six days, going they without wages for that period of time. At this time supporters are asking for contributions of food, sundries, and disposable diapers. Gift cards to purchase food at Costco or local grocers are much appreciated.

Durable goods can be delivered directly to: