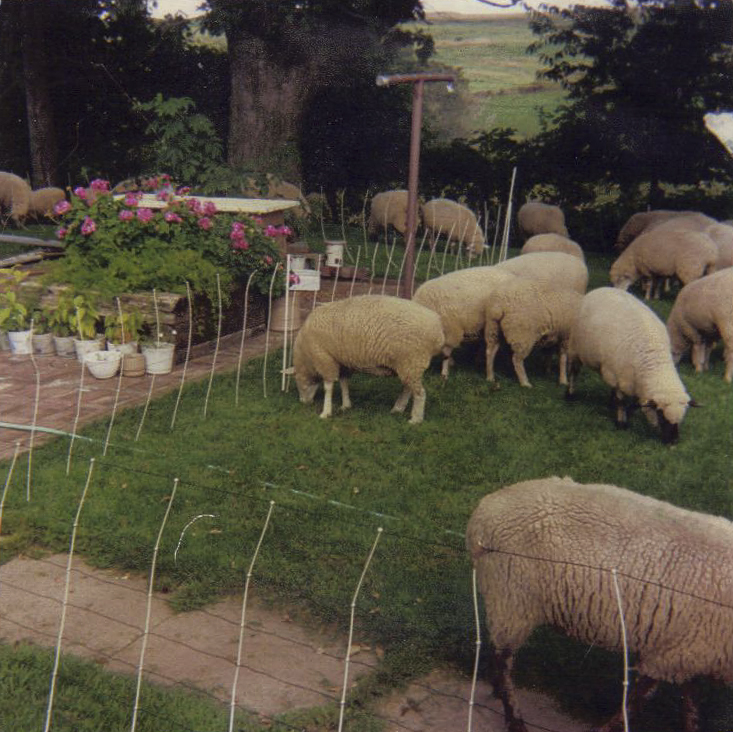 It was certainly a lively summer, and it was flying by much too fast!

Along with all the usual sheep duties, and caring for the house, yard and gardens, I was up to my ears lining up carpenters, electricians, heating contractors, plumbers, and the like for a renovation of our old house, plus a new addition. Some things had been accomplished, such as installing ceiling fans in the sun room and two other rooms, and putting in a new gas furnace and central air, but the big effort would likely not occur until next spring.

Following the capture and return of Frisco, the llama, I was currently working daily on my plan to reconcile Frisco and Sheba to a working relationship. Frisco was staked out on a long lead in the pasture below the chicken coop, where he had plenty of room to graze. Each day I would bring him an apple cut up into small pieces, and feed it to him slowly, while Sheba was stationed just behind the chicken coop, about 50 feet away.

After several days passed, I began having Sheba come just a few feet closer while I fed Frisco the apple. Sheba was doing a very good job at playing her part and never moved, but Frisco never took his eyes off her for a minute. 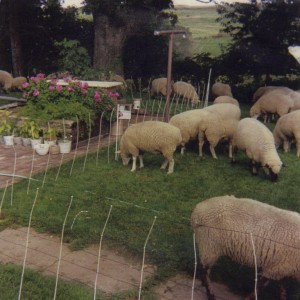 It took nearly a month to reach the point where Sheba was only about a dozen feet away from Frisco and I. Finally, I decided it was time for the culmination of this experiment. As Frisco was slowly consuming his apple, piece by piece, I called Sheba to come and sit by my right side, opposite the llama on my left side. She obediently came and sat quietly. Frisco, never taking his eyes off her, stood his ground and continued eating the apple pieces.

At last the apple was gone, and there was nothing to do but wait quietly for what seemed to be an eternity. At long last, Frisco slowly stretched his long neck past me and touched his nose to Sheba’s nose. I was holding my breath, but she did not move a muscle! I felt like shouting for joy, but had to contain myself with thinking, “Yes! It’s working!”

After a few more days of the close contact, Frisco was turned loose. Thankfully, the first nights when Sheba went out in pursuit of coyotes, Frisco would move off a short distance in the opposite direction, but he did not flee! From then on, all was well!

Sheba guarded at night and patrolled the pasture early in the mornings, and Frisco was with the ewe flock as they grazed in the daytime. At the first sign of trouble he would round up the flock and bring them home on the double! What a relief! This was working even better than I had hoped for!

Even though I was selling most of the ewe lambs every year, my prolific ewe flock kept getting bigger, and I wanted to cut it down somewhat, so in mid-August, I sold 10 mature ewes to another producer, and in early September the 47 feeder lambs were sold, so the  load was lightened quite a bit, and soon the ewe lamb sales would start.

Also, there were only 4 hens left of the original flock of 150 or so chickens, after the roosters demise, and my selling off most of the hens. These 4 were mainly kept so we could have fresh eggs, but they seemed to know their clock was ticking, and one hen kept “setting” on some non-existent eggs. I suppose she thought the chicken species was about to become extinct and was making a last valiant effort to save it!

Early September was quite rainy, but finally we got a brief respite, and I seized the opportunity to bring my ewe flock into the house yard to eat the acorns that carpeted the ground. I love that huge old Burr Oak tree, but I’m not fond of raking up all the acorns, or trying to mow over them, so I put up portable electric fences temporarily and bring on the sheep! In short order the yard is cleaned of acorns and the sheep love them and thrive on them, so it is part of their build up prior to the breeding season ahead. 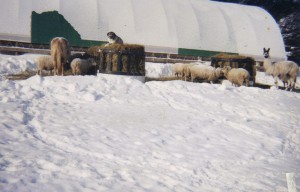 Later in the month the breeding stock sales took off and continued through the Fall, selling 57 ewe lambs, 10 ram lambs, and one 2 year old ram… These in addition to the 10 mature ewes and 47 feeder lambs sold earlier, so it was a very good year!

At year’s end, with sheep off pasture, and Sean feeding big round hay bales to all the grazing critters every few days, we settled into the winter routine, which was rather a relief from the rigors of the rest of the year!

However, we were looking forward to the week long Family Reunion Cruise in ’98, which should be a fun time!  Getting everything lined up for the care of all the dogs, cats, sheep, horse, and llama in our absence should prove interesting, plus the house renovation and new addition construction will be in full swing at the same time!

Sometimes, when you have covered all the bases as best you can, one has to cross their fingers, and hope for the best!