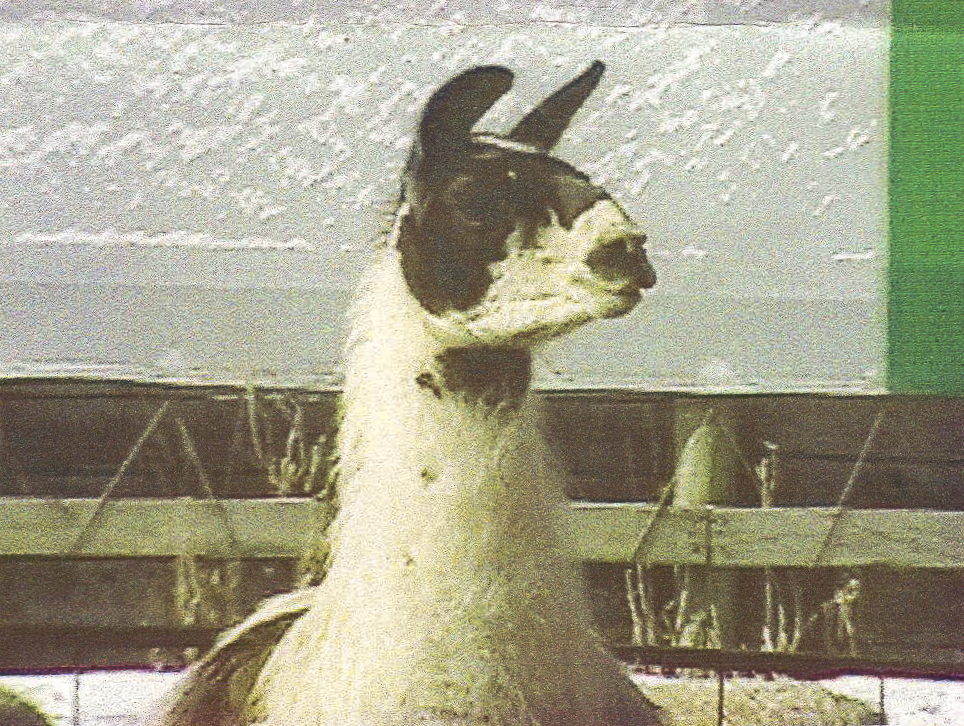 After the easy December in 1996, when Sean was doing the sheep feeding, I decided he did so well, I could just leave him in charge, and take a 3 week vacation in Las Vegas. My first vacation in twenty-five years that lasted more than three days!

My friend Cyril went there for a spell every winter, and he had three sons there, who all owned condominiums…  so I had free lodging and was entertained royally.

Back home, my kids were delighting in telling friends, “No, Mom won’t be at the Annual Sheep Day meeting this year (or the Annual SFA, LSP meeting, or whatever), as she’ll be in Las Vegas.” hen waiting for the jaws to drop and hearing the incredulous, “Your Mom? In Las Vegas?”

The weather in Vegas was great during my stay, in the high 60s and hit the 70s just before I returned home in early February. During my stay, we took several side trips to points of interest, including the Hoover Dam and the Grand Canyon… an experience not to be missed!

Sean did an admirable job of caring for all the sheep, dogs, cats, chickens, and last but not least, my 50-odd house plants in the sun room, of which he did not kill a single one! However, now that I was home, he very shortly left for a snowmobiling trip to upper New York state with a group of friends, and it was my turn to hold down the fort for 8 days.

He got home in time to get the barn cleaned before the annual sheep shearing day. Then it was time for me to gather up all the lambing supplies, and order whatever else would be needed. And sooner than I could believe, I walked out early one morning, and as I neared the barn, I heard the bleat of new born lambs, and the soft mutterings of the ewe as she offered encouragement to her babies. Anther “Year of the Sheep” was off and running!

I can’t leave out my strange and bizarre story about the chickens! I had cared for them for quite some time after Jerry’s health declined, and they were doing fine. Then suddenly, I began finding a dead rooster every day! It was inexplicable, the hens continued to do well, but the rooster died, one by one!

In that snowy winter the best I could do was to toss the daily carcass onto a huge snow drift just outside the chicken coop. The constantly drifting snow kept them covered up out of sight, but I told several friends about this strange turn of events. I think they thought I was exaggerating the story, but a couple of them thought it must be that the roosters missed their master, who refused to have any of them butchered, and consequently there were as many, if not more, roosters than hens. In retrospect, I think it was probably nature’s way of setting things in balance.

Whatever, by spring the evidence was plain to see when the huge snow drift began to melt. One friend, who had heard my story of the dying roosters, stopped in one day during the thaw and said, ” You really weren’t kidding when you said you were killing all the roosters!”

There never was a credible explanation for the story, other than it was “nature’s way.” The hens continued to do well, but a little later I sold them to some friends from SEMSPA (South East Minnesota Sheep Producers Association) who already had a fine sheep flock developed from the ewe lambs they had purchased the previous year, and now they would have a fine flock of chickens as well. I had plenty to keep me busy without the chickens, what with managing the rest of the menagerie, pastures, yard, house and gardens, and there was still the coyote problem to deal with. 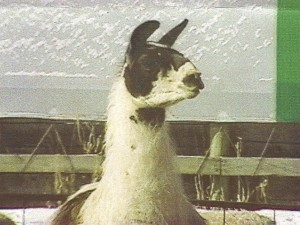 In May I went searching for a guard llama, and found a gelding available in the Spring Grove area, and purchased him. When he was delivered, I decided it would be wise to keep him in the barn for a few days until we became somewhat acclimated… emphasis on the “somewhat”! We changed his name from “Fiesta” to a more masculine “Frisco.”

When I thought it was safe to turn him loose, I brought him out to the ewe flock, and all went well. He bonded with them quickly, and went with them to pasture. Things went very well, until the inevitable night when the coyotes were howling and Sheba, barking furiously, went barreling out into the night to pursue them.

I did not know it, but at that point Frisco, terrified that the dog was after him, left the premises! Of course, the next morning he was missing. It took some hiking, and searching but eventually I found him in my neighbor’s pasture with the cattle! This meant I had to cut the line fence, then coax the llama back to our side of the fence with a grain bucket, then mend the fence and get Frisco back with the sheep flock.

The next night that Sheba went out in pursuit of coyotes, the whole scene was replayed, and this went on for most of the summer. I was getting really sick of this routine, but saw no end to it, since Frisco could cross sheep guards with gay abandon, climb hog panel gates, jump high fences, and probably leap tall buildings with a singe bound, he left the premises repeatedly!

In the rare instances when he was here, he did a great job of guarding the sheep flock, and he would bring them home in a hurry at the first sign of trouble. However, during one of his frequent absences, we lost another 3 lambs and a ewe to coyotes on pasture in broad daylight. Sheba, unfortunately, after chasing coyotes at night, often slept in the daytime and the wily coyotes soon figured that out!

Finally, after another llama absence I was heading off to hunt for him. It was a weekend and Sean, who was home and had been out with the 4-wheeler, had seen that the neighbor’s cattle were at the far west end of the pasture which would be a long walk for me, as the place I usually found Frisco was at the far east end, and near the place where I had cut the line fence.

Sean thought he should take the 4-wheeler and go round up the cattle and bring them up to the east end for me. I didn’t think he should take the 4-wheeler for fear it would spook the llama, seeing as we had chased him back down the driveway with it one day when he had blithely crossed the sheep guard and was on his way out the driveway. Sean however, didn’t think it would spook him, and he took it back to the line fence, but he was on the opposite side of the draw from where I usually brought the llama through the fence.

I hiked back to my usual place and there was Frisco where I always found him, on the high side of a pond where he could see everything that moved. And Sean was right, Frisco was not spooked by the 4-wheeler across the draw. Before we left the house, we had chained Sheba up to the metal clothes line pole near the patio, so she would not follow us and cause Frisco to flee.

Unfortunately for us, Sheba broke her chain and came racing back to where Sean was stationed across the draw. Seam caught her and was in the process of taking her home, but Frisco saw her and took off, and I could not get close to him again. I knew it was time for desperate measures!

I hiked home and called Cyril, who lived across the street from Mike, the animal control officer for Caledonia Township. When I told Cyril my plight, he said, “Don’t worry, I’ll have Mike out there to get him!” Sure enough, soon Cyril’s son Mark drove in, accompanied by Mike and his chest full of tranquilizers and anti-dotes, as well as Cyril’s daughter Ann, who wanted to share in the llama drama, so she could relate it to her 6th grade students in Minneapolis.

Mark parked the car near the highway, but away from the pond, where Frisco had returned. We had a full view of the scene. Mike set out on foot to stalk the llama, dart gun in hand. He slipped into the corn field to our east, and was out of sight.

We waited tensely, and after quite some time we could see the top of Mike’s head as he exited the cornfield to the rear of Frisco, and kept moving closer to the llama. Suddenly, we saw Frisco give a small start, as if something had bit him. It was, of course, the dart with the tranquilizer in it. We waited anxiously, and after a bit we saw the llama slowly fold his long legs down, and he was out for the count!

Mike then called to Mark to bring the car with the chest of antidotes down to the pond. I had brought my lead rope so I could lead Frisco home when he had recovered enough. However, before he became conscious our neighbor and his dad drove in with a pickup load of silage for the cattle, unloaded part of it, and then became engrossed in the unfolding “llama drama.”

When they learned I was planning to lead him home, they said, “With four guys here, we can just hoist him onto the silage in the bed of the truck while he’s still groggy, and we can haul him home for you.” So, I attached my lead rope to Frisco’s halter, and Mike and I rode in the bed with him to make sure he stayed put on the short drive to our place. Mission accomplished!

That is not the end of the Llama Drama, as it remained for me to work with Sheba and Frisco and somehow convince him that she (Sheba) was not a threat to him (Frisco). Next story!