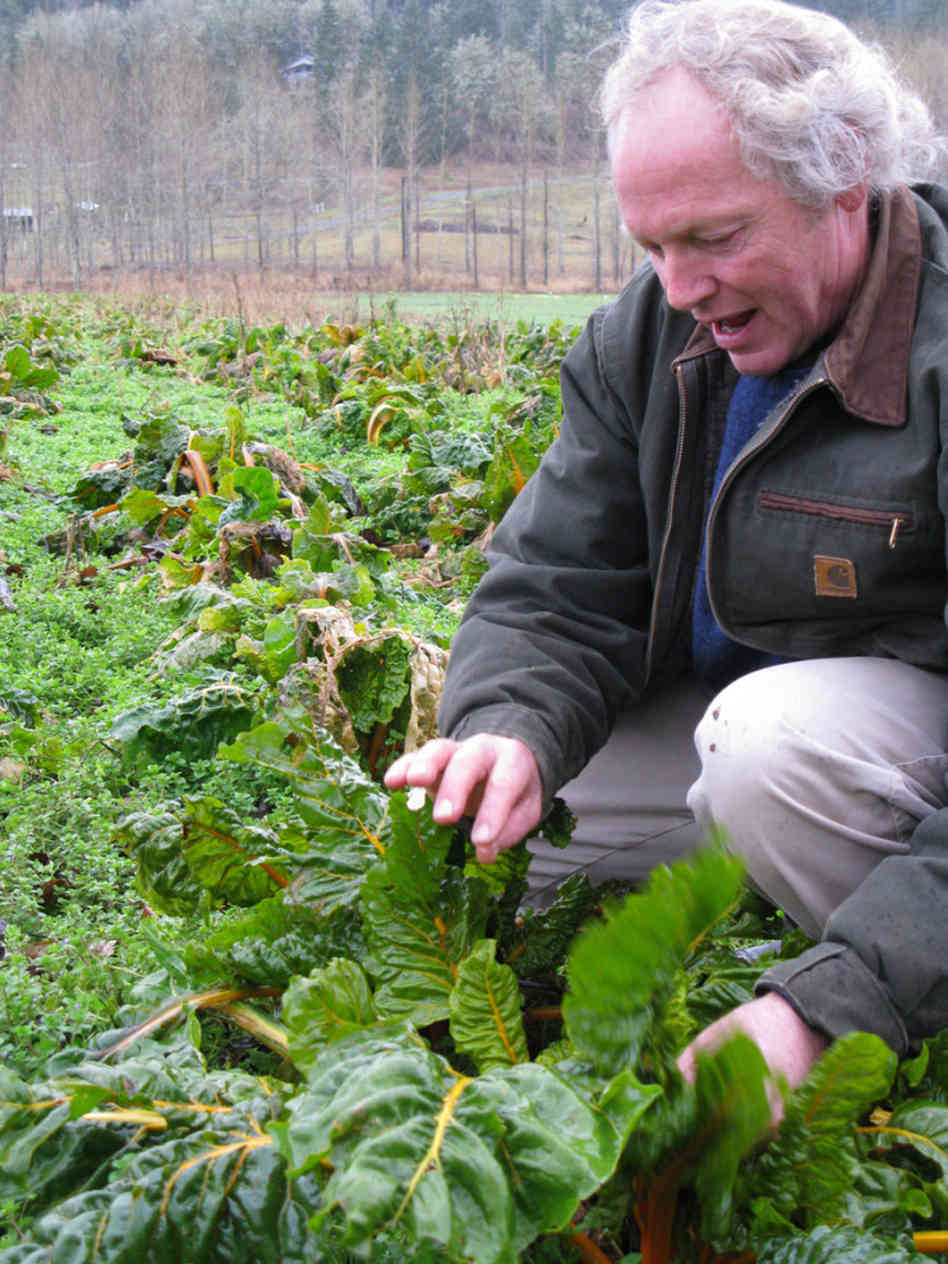 (Copyright by and reproduced with permission from Frank Morton, Wild Garden Seed.)

Holy Crap! You Can Patent That!?

I remember the first time I saw the words “Utility Patent Applied For” in a seed catalog description. It was 2008. We had just filed court papers to try to keep GE sugar beet seed production out of the Willamette Valley, and now seed patents had sprouted up in familiar ground. I was stunned. A patent on what? This was not a Monsanto, Dupont, or Syngenta catalog, this wasn’t GE corn or soy being described—this was the catalog I had been ordering seed from since I began farming. This was LETTUCE being described. The time had arrived that only the most paranoid among us would have anticipated in 1980, when I made my first seed order from this catalog, which included a small booklet published by the catalog founder about saving one’s own seed. It was the first seed saving book I ever read. Now, “Utility Patent Granted.” Nobody would be saving seed from these lettuces…

How times have changed. In 1980 there were no patents on life — living organisms were specifically excluded from patent protection at the US Patent Office. The advent of bioengineering changed that by creating a Supreme Court case around whether a gene insertion into a bacterium (to clean up oil spills, the patent proposed) constituted a novel invention. Well, yes, the Supreme Court decided that moving genes from one unrelated species to another constituted a feat of engineering, and deserved the stamp of novelty as much as any invention. This decision broke the ice for intellectual property incursion into the life sciences, and neither medicine nor agriculture have been the same since.

In 1980 there were two ways to get proprietary rights on plant innovations. Since 1930 a breeder could get a US Plant Patent on trees, roses, fruits, and other perennials that are propagated by cuttings and other clonal methods. The US Congress specifically excluded potatoes (all tubers, in fact) and all seed propagated plants from patent protection. In 1961, European governments and seed interests succeeded in creating an international agreement (UPOV) that allowed for the first intellectual property (IP) rights on plant varieties, but allowed for a “breeder’s exemption,” meaning that protected varieties were still available for anyone to use for breeding purposes.

This assured that companies would be able to control the sale of seed varieties that arose from their breeding and development investments, but society would continue to benefit from new crop innovation, much of which originated in publicly funded universities and public breeding programs worldwide. The US created its own Plant Variety Protection Act in 1970, the first protection of seed-propagated plants recognized by US law. This IP protection also contained a breeder’s exemption, allowing for ongoing breeding and research with PVP varieties, but also a “farmers exemption,” allowing farmers to save seed for replanting, and to sell to neighbors—the so called “brown bag exemption” (seed could be sold in unprinted bags).

The Europeans have never allowed the farmer exemption, and have actually maintained prohibitions on the growing or sale of “unauthorized varieties” (any variety not recognized as worthy for inclusion on an official “white list”). If you can imagine commercial horticulture without heirloom varieties and seed saving gardeners and farmers, that’s Europe. The US is a freewheeling seed fair compared to the restrictions of the EU, and it has been pointed out to me that Wild Garden Seed could not have been born in Europe—most of our varieties would be illegal.

Frenchman Dominique Guillet and his Kokopelli Seed organization have done the most to reverse EU laws against selling unauthorized seeds (mostly by just doing it and confronting the consequences), but it has meant going against the interests of multinational seed corporations and the French government in Court, and even enduring a police raid and confiscation of property. This is an ongoing battle, but at last report, it appeared that restrictions on unauthorized varieties were being overturned, at least to some degree.

In 1980, as the first GMO bacterium earned its patented credentials in the Supreme Court, PVP vegetables were just being noticed by seed savers. Horticulture Magazine ran a small article—“What is PVP and Why Are People So Upset About It?” People of the time were used to keeping and selling garden pea seeds through catalogs like Abundant Life Seed Foundation, and here was a new thing called ‘Sugarsnap’ (PVP) peas—the best thing since sweet corn—and you couldn’t sell the seeds without a license from the company that owned the variety. Remember, we weren’t yet conditioned to the idea of “ownership of life,” and “the freedom of the commons” was still a persuasive argument. Seeds were considered part of all people’s common heritage, and seeds reproduced themselves. Some pretty righteous people were pretty pissed off for a couple of decades.

In hindsight and in fact, the PVP concept and practice is similar to a copyright (but infinitely more expensive, since copyright costs nothing), and I have always been able to understand copyright and publishing rights, having been conditioned to it. PVP covers a complete work of the breeding art—a variety of PVP lettuce is like a finished poem. Anyone can enjoy it, reproduce it for themselves and their friends by voice or copying machine, use it as inspiration, or rearrange the words or letters—but to publish it, sell it, put it on a greeting card, requires permission (maybe money), for 20 years from the time of introduction. This was still not a popular argument in organic grower circles in 2000, but it was made.

The Rise Of Utility Patenting In Plants

A glyphosate-resistant soybean was the first food crop to be genetically engineered, and thereby, in 1985, became the first plant candidate for a utility patent from the US Patent Office. Using the same logic, that GE = Novel Invention, the Patent Office continued to grant plant patents for GE herbicide resistance and Bt-traits in corn, cotton, soy, and canola at an increasing rate throughout the next 20 years. Quietly though, a new trend began with a vaguely appreciated 2001 US Court decision (J.E.M. Ag Supply, Inc. v. Pioneer Hi-Bred) that proposed that conventionally bred varieties were candidates for utility patent protection, and furthermore, the traits of conventionally bred plants were candidates for patenting if they were novel. The complex problem of defining what a novel trait might (or might not) be apparently did not fall upon the Court, and the ambiguity of this has begun to haunt the claims of patents on plants.

In a mental act of denial, I have never fully let the implications of this decision sink in. It is too discouraging to consider for too long at one stretch. The implication of the J.E.M. decision is that every thing, every trait, every breeding technique, that has a utility patent on it is removed from the common breeding pool of agriculture for the duration of the patent. Not just whole varieties, but significant traits, like insect and disease resistance, yield, tolerance to various environmental stresses, colors, leaf shapes and sizes. Utility patented plants, their pollen, genes, or any aspect of the plant, may not be used for any purpose at all (breeding, research, trade, personal use, etc.) without the express permission of the patent holder. This means that useful, perhaps critical, innovations in plant breeding and research (resistance to important pests and diseases, for example), can be monopolized by single parties for 20 years. The consequences of this were more obvious to breeders than to IP lawyers, and complaints have never ceased.

A small group of corporations control the largest portion of the world’s utility patents on plants, and there are big misunderstandings between these players and the public about exactly what these patents cover, and to what extent the bewildering flurry of claims are overreaching rather than legitimate. The worldwide coalition, No Patents On Seeds, reports on several EU Patent Court cases involving challenges to patent applications from public NGOs as well as competitive corporate interests. The grounds for challenge include lack of novelty, lack of originality in the claims, claims made on what are essentially biological processes, the existence of prior art, etc. The outcomes of some court cases have not been a comfort to the challengers, with the courts finding novelty, originality, and invention where challengers did not. Though limiting the reach of some outrageous claims, EU Courts have allowed patents on disease and insect resistance to stand.

But what does it even mean when Syngenta makes a patent claim for “pleasant taste” in a conventionally bred melon? Isn’t this what all melon varieties make some claim to possess? Why is such a patent worth the cost? Can it keep others from describing their melons as “pleasant tasting?” At some point such patents bring to mind Apple’s claim that a rectangle with rounded corners is a novel, patentable, design element. Most people laugh at the idea, but Samsung is paying big money over it after a US Court agreed with Apple. It strikes most plant breeders as obvious that beneficial traits like pest and stress resistance, good flavor and bright colors, high nutrition and glossy leaves, would be combined (their traits would be “stacked”) to create ever more desirable varieties of produce.

I am not able to understand, and I have not been able to find a written explanation, why such products of the breeding process are not “obvious to anyone practiced in the art.” Nor can I understand how plant breeding can proceed when I read patent after patent claiming that stacked traits for resistance, color, shape, size, earliness, fruit pH, taste, and brix—as well as the fundamental methods of the breeding process—are claims for novelty, uniqueness, and utility. You may as well patent products that people will swallow after chewing. In fact, that appears to be the bottom line.

Recently, the European Union and its major seed companies seem to have realized that the seed patenting laws that were intended to spur innovation by promising returns on investment in breeding, have instead thrown up barricades to innovation by creating the threat of lawsuits over claims on traits and methods of breeding. The companies themselves are not certain what they own, and they realize that lawsuits over trait infringements could cost more than the patents are worth. Indeed, one source estimates that the average cost of challenging utility patents is $500,000, and the average cost to manage cross licensing agreements between multiple patent holders (in order to allow a challengable breeding project to begin) is $100,000. That is a lot of lettuce.

Unlike patents on row crops like corn and soy, the costs of patents and litigation on horticultural seed (vegetables, flowers) are less likely to be justified by the crop base of any one variety. The costs are greater than the potential profits. As a result, seed patent holders in Europe have recently suggested offering breeders rights exemptions to one another, reducing the reach of their claims over a noodle pile of counter-claims, and reducing the effect of the utility patent on conventional plants to what the international varietal protection agreements already do. This appears to be an admission that utility patents are not an appropriate means for managing intellectual property rights on plants.

Frank Morton has been breeding and selecting seed for more than 30 years on his farm, Gathering Together Farm, in the western Oregon town of Philomath.

He sells organic seed to farmers and serious gardeners through his Wild Garden Seed catalog.