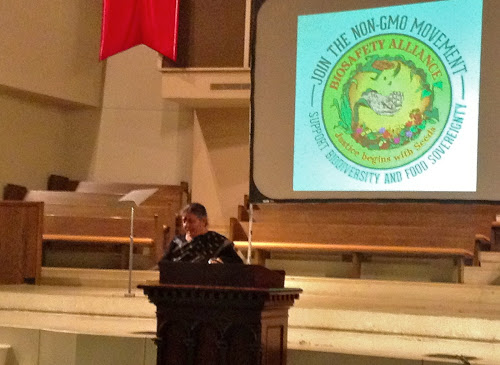 A Global Gathering of Anti-GMO Activists 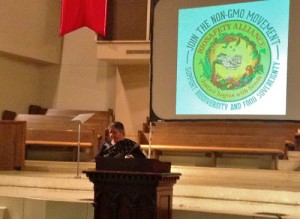 I spent the past two days at an international gathering here in Seattle comprised of a diverse network of farmers, farm workers, union and community organizers, seed savers, plant breeders, consumer right-to-know activists, research scholars, students, philanthropists, entrepreneurs, and elected officials. What we all shared in common is a thirst for justice and an understanding that “Justice Begins with Seeds,” which was the theme of the meeting organized by the California-based Biosafety Alliance.

The theme of the conference reflects part of a global social movement response to the enclosure of the biological heritage of humanity by the biotechnology industry – the “Gene Giants” like Monsanto, Dow, and Syngenta – which seeks to privatize ownership of seeds and make all living things patentable.

Unlike most academic conferences, this gathering was about the sharing of social action oriented ideas. What are we doing? What works, and what doesn’t? What else do we need to do to stop Monsanto and its ilk dead in their biopiracy tracks?

Dr. Vandana Shiva, the renowned Indian physicist, ecofeminist, and food democracy advocate, headlined the gathering by presenting the conference keynote address on the first night of the gathering (Friday, August 2).
Dr. Shiva’s message was a profound and eloquent critique of Monsanto as the embodiment of capitalist patriarchy, which she described as characterized by a central delusion: “You destroy and then pretend you are creating.”

Shiva focused her attention on re-energizing the movement, inspiring activists not to become disheartened by the long and difficult slog:

In 1987, farmers were saving seeds and Monsanto was ill, it was dying…That’s why it pushed through intellectual property rights… and the WTO… How long did we have to fight slavery? All dictatorships come to an end… When we look at GMOs we need to look at the relationships involved and the main relationship of GMOs is that they [the Monsantos of the world] destroy democracy…

Shiva also alluded to the other delusions that undergird the biotechnology industry: “We were promised more food and fewer chemicals, and instead we have more chemicals and less food.” This was a common theme addressed as the conference participants shared their knowledge and evidence of the growing ecological and health menace posed by transgenic crops and foods.

Explaining what GMO crops have actually delivered, Shiva said: “70 million acres of super weeds in this country [the USA] and that is increasing every year…” The advent of these super weeds, as I have reported in this blog, is affecting the ability for organic and conventional farmers alike to maintain their yields and biodiversity. It is one thing – poetic justice even – for Monsanto’s Roundup Ready crops to fail before the power of the almighty adapting Lambs Quarters; it is an injustice and cultural ecological disaster for that chaos to be unleashed on indigenous, traditional, and organic farmers.

The damage caused by GMOs affects all life and exacts an often unheard of toll on farmers themselves. Shiva explained how Monsanto is responsible for the rash of farmer suicides in India, now numbering more than a quarter million per year. The Indian government has authorized and promoted arrangements for Monsanto in which the corporation sells its GMO cotton not to individual farmers but to the seed and agro-chemical retailers who are also the creditors – indeed, the only creditors for peasant farmers in India. To get credit for the seed, herbicide, fertilizer, and other inputs, the farmers must pay outrageously usurious prices and put their land up as collateral. This arrangement all too frequently results in perpetual debt and bankruptcy for the farmers. The “farmers drink pesticides” and commit suicide in a desperate response to the loss of land and honor.

Also damaged by this system are India’s amazing native biodiversity and the knowledge of indigenous peoples – most of them women – who are responsible for the bulk of subsistence food produced on the subcontinent. In traditional farming systems, Shiva stated, “There are 250 greens in the farmers’ fields that are volunteers and all of them are food and rich in iron, vitamins, antioxidants” and other nutrients. This biodiversity is being destroyed by a mad rush to “kill the weeds” which are erroneously seen as “stealing nutrition” from the people. The absurdities perpetrated by Monsanto’s immoral economy are endless.

Dr. Shiva concluded with a call to become the change we want: “Local systems are the only way to create food democracy…commodities do not feed people.” We must be creative and nurture “our seeds of freedom for gardens of hope…We can create the food systems and dedicate ourselves to the creative acts in our hands so we can be the change we want.”