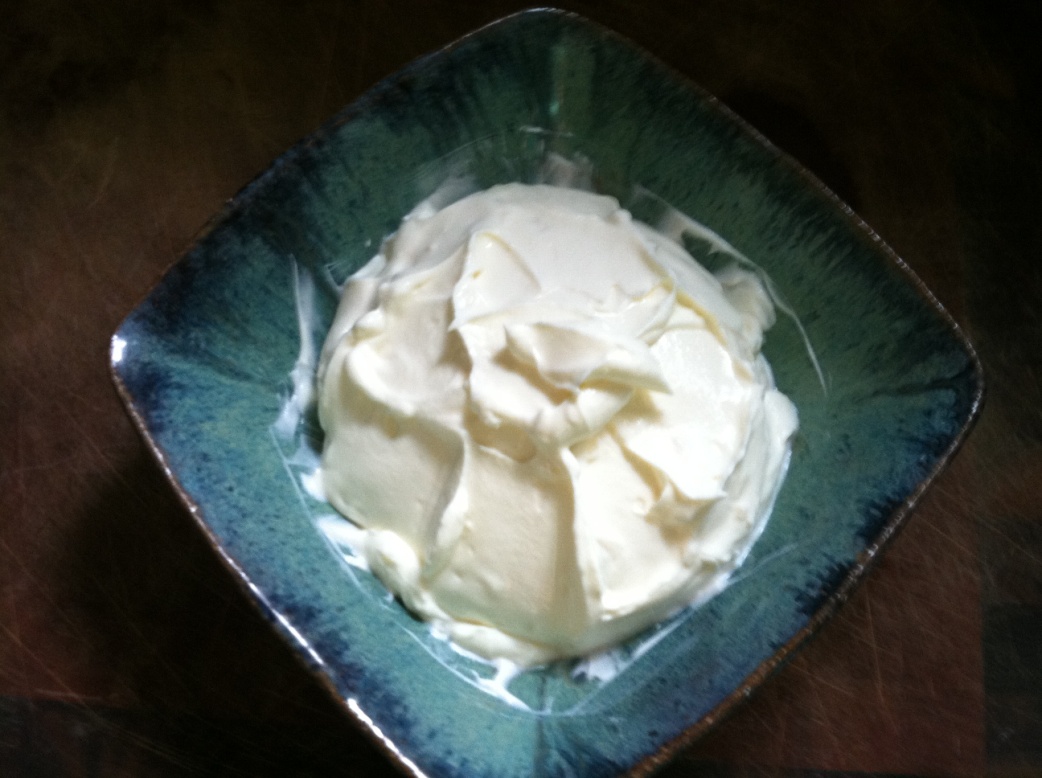 Everything is interconnected, and all actions have consequences. Whether they are intended or not, some consequences are better than others. My recent discovery that New York’s Greek yogurt production is getting whey out of hand is exemplary. But I’m getting ahead of myself.

Two weeks ago I began my summer session of Meatless Monday dinner/classes, and we were discussing yogurt (because I made a Cold Yogurt & Cucumber Soup). Conversation turned to the topic of Greek yogurt, and I mentioned that I thought it had less protein than regular yogurt because the whey had been removed, and I thought the whey was high in protein. Someone in the class (correctly) disagreed with me and pointed out that Greek yogurt was higher in protein.

I have never purchased Greek yogurt because: 1) I prefer the consistency of regular yogurt as my mainstay, and 2) whenever I want “Greek yogurt” for something, I just make my own labneh (another name for strained yogurt, Greek yogurt or yogurt cheese), made by simply straining yogurt in a cheesecloth or paper towels to remove the whey. So in preparation for Class #2, I researched whey, especially because I was making cold borscht with homemade labneh.

Here is yogurt that I strained overnight in the fridge. 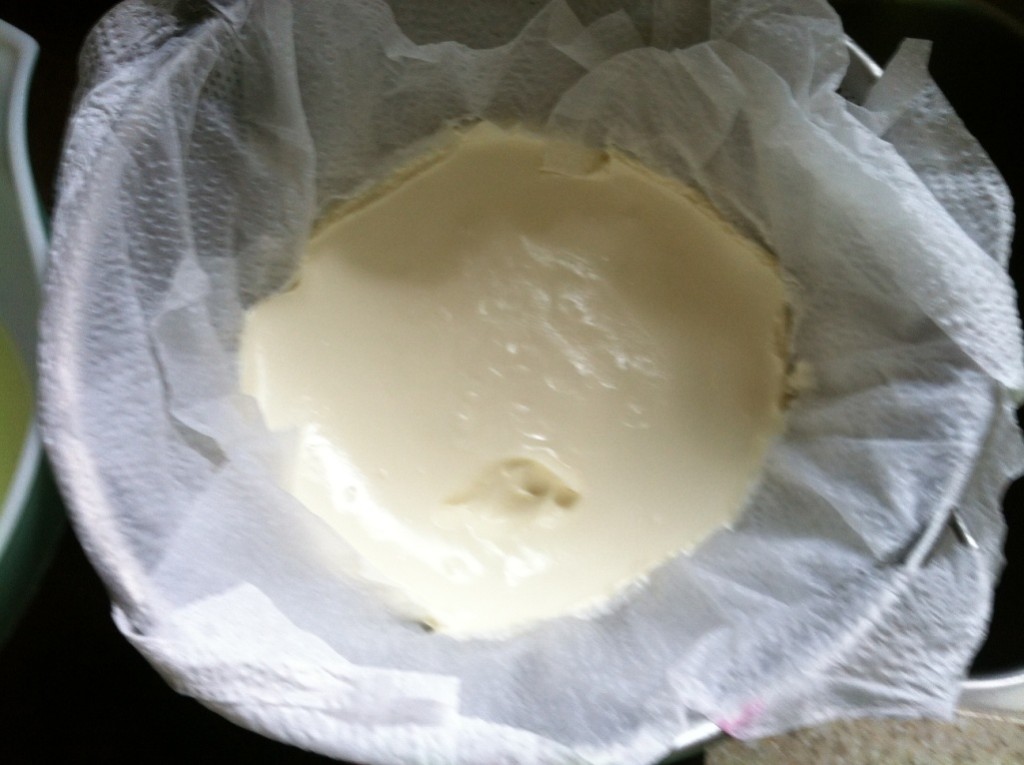 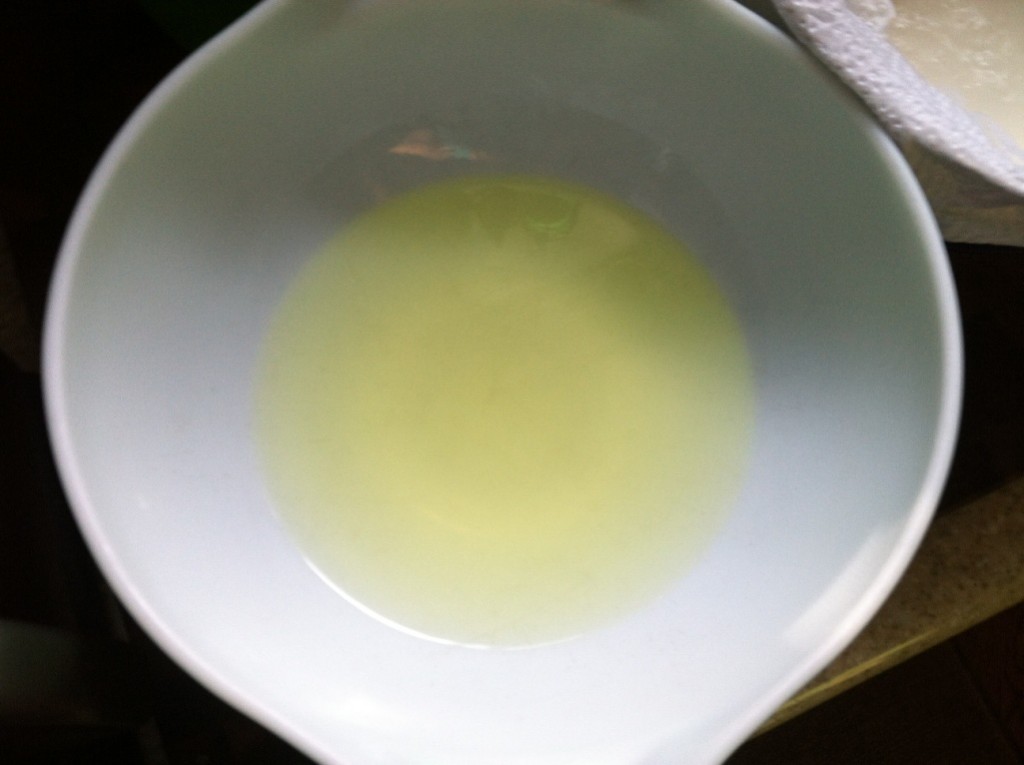 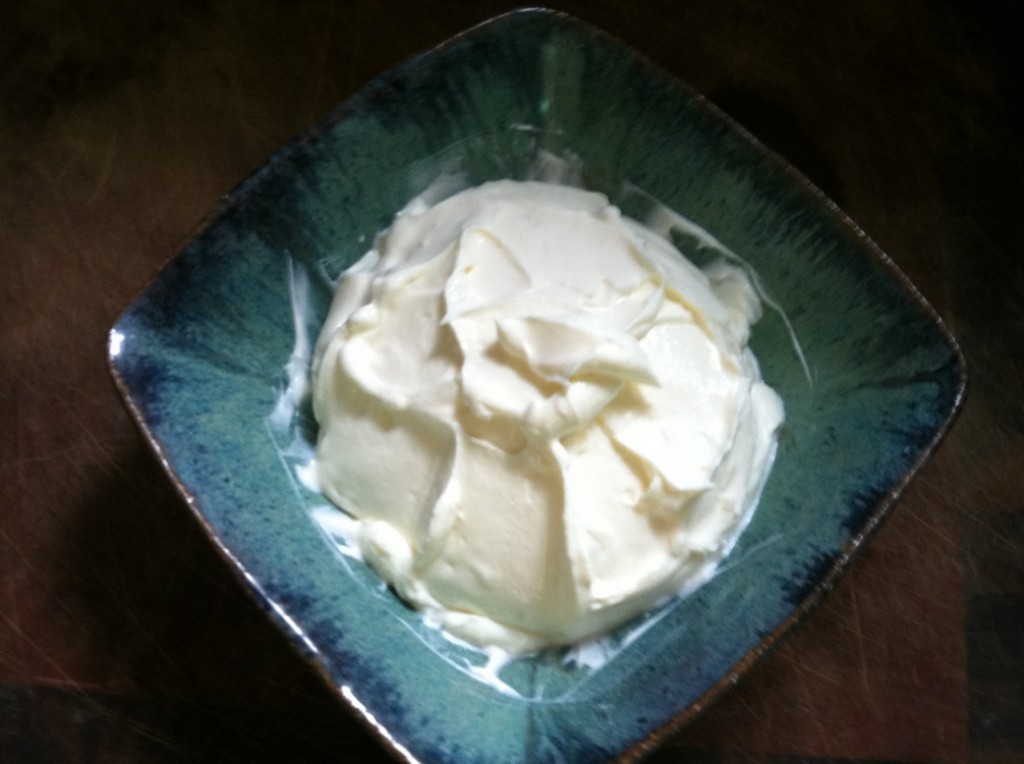 I learned that there are two distinct kinds of whey: the sweet whey made from cheese, and the sour or acid whey made from yogurt. Their difference is notable.

Sweet whey is high in protein and much easier to deal with as a byproduct than acid whey. It is easily dried and cheese-makers have developed a lucrative business selling the dried whey as protein powder to use in body building supplements and as a food ingredient.

On the other hand, the byproduct of sour or acid whey has a pH count that is considerably more acidic, and the thin watery waste cannot be discarded easily. That’s because it is illegal to dump into streams and rivers as its decomposition is toxic, and would rob oxygen from the water and kill off aquatic life over potentially large areas. (The less acidic cheese whey has killed tens of thousands of fish.)

In all fairness, from reading various articles on the topic, I learned that it would be equally toxic to dump huge amounts of other non-offensive acidic liquids into our waterways, such as tomato or orange juice.

Nevertheless, the Greek yogurt industry has become a national craze, and New York state – now also known as the Silicon Valley of yogurt – officially surpassed California in 2012 as the top producer of yogurt in the nation. According to the May 22, 2013 article in Modern Farmer,

“The $2 billion Greek yogurt market has become one of the biggest success stories in food over the past few years and total yogurt production in New York nearly tripled between 2007 and 2013. New plants continue to open all over the country. The Northeast alone, led by New York, produced more than 150 million gallons of acid whey last year, according to one estimate.”

Which whey to see it – problem or opportunity?

Depending on what I read, the conundrum of what to do with all the whey can be seen as an ongoing problem or future Holy Grail if good uses can be found for the waste product. Current possibilities in research and development:

Apparently there are no industry-wide statistics on where all the whey is going, and the race is on for the industry to solve the increasing whey problem that they never had a plan to deal with from the get-go. Meanwhile, solutions are on the hush-hush in competitive proprietary America.

When does too much of a good thing turn sour?

Back in August of 2012, Cuomo convened the state’s first ever Yogurt Summit, bringing together yogurt producers, dairy farmers and state officials to find new ways to support the industry’s growth in New York. On April 18th of 2013, the Governor did what he promised to do at the summit: remove regulatory burdens to make it easier for dairy farms to increase their herds. So, environmental permit and costly regulation requirements which slow up growth for the local economy were relaxed. (Remember, the Greek yogurt industry primarily utilizes milk from CAFOs – Concentrated Animal Feeding Operations, not organically certified smaller scale dairy farms.)

Not too surprisingly, according to Riverkeeper.org, “New York’s Clean Water Advocate,” Cuomo’s action does not ensure water protection from the booming yogurt industry and dairy farmers. The conclusion drawn from their analysis was that the relaxed waiver would likely result in increased environmental degradation of water, soil, and air quality, and the burden of cost would be transferred from dairy operators and processing facilities to the public. Ultimately the public “will pay the price in declining water quality.” (http://www.riverkeeper.org/wp-content/uploads/2013/01/Appendix-A-Lithochimeia-Report.pdf)

Why has Greek yogurt so captivated America?

I surmise there are two reasons for Greek yogurt’s meteoric growth. One is its “mouthfeel” – the creamy rich thickness that is so pleasing from a sensory perspective. For many, it is irresistible and more satisfying than thinner regular yogurt. Second is the marketing of Greek yogurt as a super healthy diet food to overweight America. Devoid of demonized fat (as it’s nearly impossible to find anything other than 0% fat Greek yogurt) and filled with probiotic friendly bacteria (for our guts) and more protein than regular yogurt, it’s a perfect diet food offering satiation, regulation of blood sugar and healthy nutrients.

Factoring in the environment – Greek yogurt loses to regular yogurt production because it utilizes three times as much milk to make the product, and obviously the whey byproduct is currently a huge environmental issue.

Regarding calories – For equivalent serving sizes, Greek yogurt is the same caloric value as whole milk/full fat yogurt. True, Greek yogurt has less fat and carbohydrates but more protein. However, protein is the ONE thing most Americans aren’t deficient in. In fact, the average American eats twice as much protein as needed. When the body has extra protein, it either converts it to carbohydrate to use as fuel, or, if you’ve eaten too many calories, stores it as fat.

Satiation – While regular whole milk yogurt and high protein Greek yogurt both stave off hunger longer than a carbohydrate food, fat takes even longer to digest than protein and therefore satiates longer. Additionally, for the record, whole milk contains the fat soluble vitamins A, D, E and K.

So – where’s the beef in Greek yogurt?

While this story can continue unfolding in layers of complexity and consequence seen from all angles, I would be remiss if I left out this final piece: Greek yogurt is slated to end up on the lunch trays of school children this September. New York schools, along with those in Tennessee, Idaho and Arizona, will be taking part in the U.S. Department of Agriculture’s Greek Yogurt Pilot Program. That means three times the CAFO-grade milk production to create the product.

Woopie! And if it works there – the sky’s the limit.