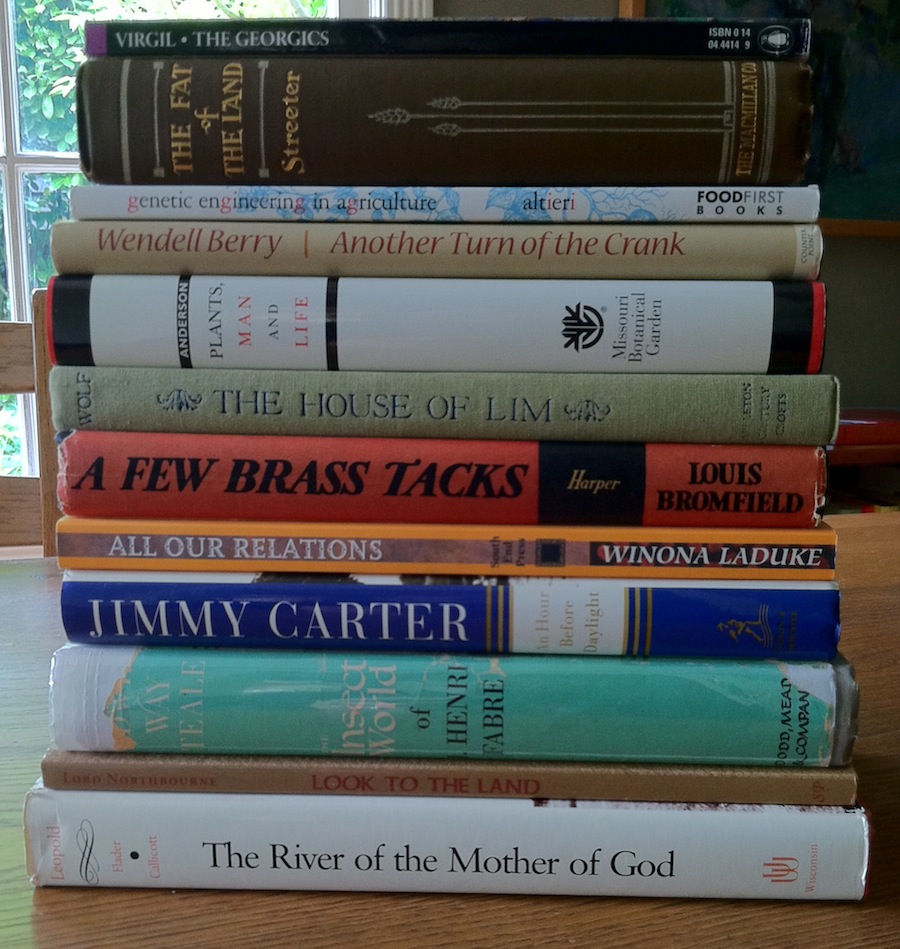 Your assignment: summer reading that will inspire, motivate, and educate you!

We’ve raided the shelves of the Kailing library to create a list of books that cover a wide range of topics and represent thinking separated by thousands of years. These books are centered on the relationship we have with the earth and each other, with our communities and surrounding ecosystems, with the plants and animals around us, and with the food we eat.

Ranging from poetry and fiction, from philosophy to biography, these are books that can change the way you live on and care for the earth.

We begin with The Georgics of Virgil, written in the first century BC).

“Georgic” means “to work the earth,” and The Georgics combines practical wisdom on tending the land with exuberant eulogies to the rhythms of nature.

Book 1 teaches about field crops, Book 2 about trees, Book 3 about animals and livestock, and Book 4 about bees.

From idyllic descriptions of hills strewn with wild berries in “vinespread autumn” to warnings of gods and natural disasters, it is at once a reflection on the cycles of life, death, and rebirth; an argument for the nobility of labor; and an impassioned reflection on the Roman empire.

(Get a recent edition here.)

The Fat of the Land: The Story of an American Farmer, John Williams Streeter (1904)

The copy we have of this book is more than 100 years old, slightly the worse for wear, and yet as inspiring as if it were brand new. In the first chapter, Streeter says:

By choice and by training I was a physician, and I gloried in my work; but by instinct I was, am, and always shall be, a farmer. All my life I have had visions of farms with flocks and herds, but I did not expect to realize my visions until I came on earth a second time.

This book is out of print and out of copyright; you can learn more about digitized copies of this book here.

Those are not your grandfather’s potato chips. As debate rages over the costs and benefits of genetically engineered crops, noted agroecologist Miguel Altieri lucidly examines some of the issue’s most basic and pressing questions:

Another Turn of the Crank, Wendell Berry (1995)

Six essays on sustainability and stewardship.

Wendell Berry proposes, and earnestly hopes, that people will learn once more to care for their local communities, and so begin a restoration that might spread over our entire nation and beyond. The renewed development of local economies would help preserve rural diversity despite the burgeoning global economy that threatens to homogenize and compromise communities all over the world.

From modern health care to the practice of forestry, from local focus to national resolve, Berry argues, there can never be a separation between global ecosystems and human communities — the two are intricately connected: the health and survival of one depends upon the other.

Published in 1951, The Sea Around Us is one of the most remarkably successful books ever written about the natural world. Rachel Carson’s rare ability to combine scientific insight with moving, poetic prose catapulted her book to first place on The New York Times best-seller list, where it enjoyed wide attention for thirty-one consecutive weeks. It remained on the list for more than a year and a half and ultimately sold well over a million copies, has been translated into 28 languages, inspired an Academy Award-winning documentary, and won both the 1952 National Book Award and the John Burroughs Medal.

This classic work remains as fresh today as when it first appeared. Carson’s writing teems with stunning, memorable images–the newly formed Earth cooling beneath an endlessly overcast sky; the centuries of nonstop rain that created the oceans; giant squids battling sperm whales hundreds of fathoms below the surface; and incredibly powerful tides moving 100 billion tons of water daily in the Bay of Fundy. Quite simply, she captures the mystery and allure of the ocean with a compelling blend of imagination and expertise.

Today, with the oceans endangered by the dumping of medical waste and ecological disasters such as the Exxon oil spill in Alaska, this illuminating volume provides a timely reminder of both the fragility and the importance of the ocean and the life that abounds within it. Anyone who loves the sea, or who is concerned about our natural environment, will want to read this classic work.

(Get a recent reprint here.)

What is the difference between a wild and a cultivated plant? Why have scientists tended to neglect the study of cultivated plants? Why are the ancient, everyday plants with which we spend our lives virtually unknown?

Professor Anderson traces the development of man’s influence on plant life, particularly crop plants, which he shows are largely mongrel weed-hybrids that sprang up on the dump heaps and in the gardens of primitive man.

Get a recent reprint here.

The House of Lim: a Study of a Chinese Farm Family, Margery Wolf (1968)

The House of Lim is a description of the rural Chinese extended family with whom she and her husband lived for two years while carrying out anthropological research in a Taiwanese village.

Combining the sensitivity of a woman for such matters, the literary ability of a novelist, and the approach of an extremely sophisticated social scientist, Mrs. Wolf has produced a that can be read by students of China, social scientists, and the general public.

The theme of the book is the history of the Lim family over four generations, from its founding by a poor tenant farmer of remarkable character to its ultimate division in 1961.

Get a recent reprint here.

Believing that the bases of man’s present wretchedness are far more economic than political, social, racial, or national in origin, Bromfield blasts away at the panaceas offered both by extreme Left and extreme Right, which he thinks overlook the nature of man: his capacity for good, his dignity as an individual, his need for gods in which he can believe, his desire to work and create; and too often offer him economic security only at the price of these things.

Bromfield points out that a nation’s real wealth is measured by its natural resources. If we exhaust these by exploitation, sale, or gift, we must become a poor nation, no matter how much money we have. The only answer he insists, is to conserve our resources, to follow a policy which will lead to high agricultural yield at a lowered production cost, and to establish our trade upon a basis whereby we receive as much real wealth as we export.

Get a copy of the original or a reprint here.

LaDuke’s unique understanding of Native ideas and people is born from long years of experience, and her analysis is deepened with inspiring testimonies by local Native activists sharing the struggle for survival.

On each page of this volume, LaDuke speaks forcefully for self-determination and community. Hers is a beautiful and daring vision of political, spiritual, and ecological transformation.

An Hour Before Daylight, Jimmy Carter (2001)

Jimmy Carter re-creates his Depression-era boyhood on a Georgia farm before the civil rights movement forever changed it and the country. He writes about the powerful rhythms of countryside and community in a sharecropping economy, offering an unforgettable portrait of his father, a brilliant farmer and a strict segregationist who treated black workers with respect and fairness; his strong-willed and well-read mother; and the five other people who shaped his early life, three of whom were black.

Carter’s clean and eloquent prose evokes a time when the cycles of life were predictable and simple and the rules were heartbreaking and complex. In his singular voice and with a novelist’s gift for detail, Jimmy Carter creates a sensitive portrait of an era that shaped the nation and recounts a classic, American story of enduring importance.

Throughout the world, the books of J. Henri Fabre have introduced hundreds of thousands of readers to the amazing realm of the insects. No other writer in this field has attained his popularity. Edwin Way Teale’s selection of the most compelling of Fabre’s writing makes The Insect World of J. Henri Fabre the essential edition of the writer Darwin called “the incomparable observer.”

During most of his ninety-two years, Fabre – harassed by poverty and able to afford only the most meager equipment – explored the mysteries of the commonplace.

His discoveries and adventures, told with incomparable lucidity and charm, form the ten large volumes of his classic Souvenirs Entomologiques.

Beauty of style and accuracy of observation unite poetry and science in his pages.

Get a reprint here.

Lord Northbourne, was a man of exceptional vision, who already in the 1940s diagnosed in detail the sickness of modern society as stemming from the severance of its organic links with the wholeness of life.

His later writings exercised considerable influence on his younger contemporaries E.F. Schumacher and Thomas Merton, and in many ways anticipate the essays of Wendell Berry.

Get a reprint here.

The River of the Mother of God and Other Essays, Aldo Leopold (1991)

Aldo Leopold has been called an American profit, the father of wildlife management, and the single most outstanding spokesman for conservation the world has produced.

In the public mind, his name is inextricably linked with a single work, A Sand County Almanac, a classic of natural history literature and the conservationist’s bible. But Leopold authored other books and hundreds of articles and essays.

The River of the Mother of God and Other Essays brings together the best and most representative of Leopold’s essays athat are previously unpublished or difficult to find.

These essays reveal Leopold the activist and advocate as well as Leopold the innovative professional, struggling with the bureaucratic, political, and economic dimensions of conservation.