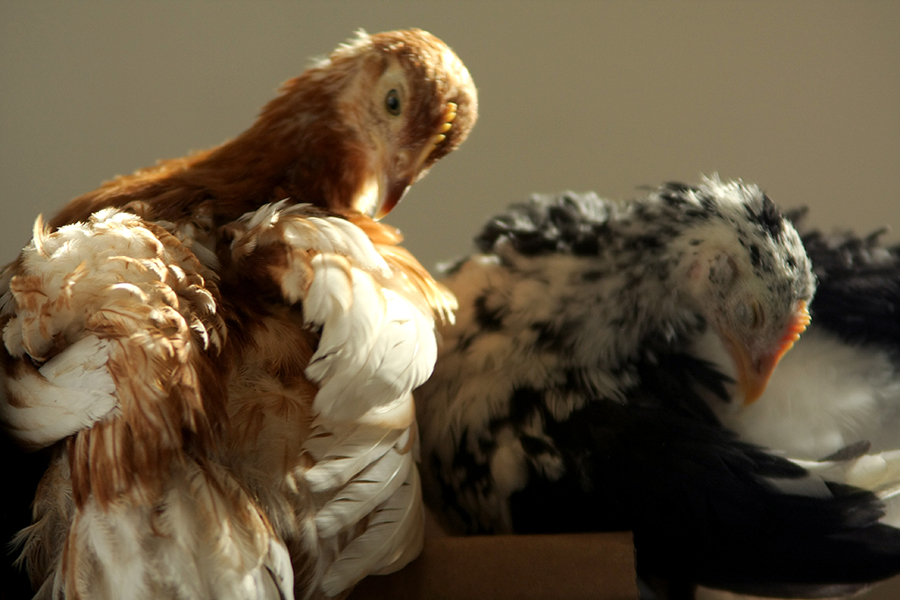 Time has slipped away from me again, but I’ll do my best to catch you up on our chicken situation. It’s been a crazy couple of weeks!

Around the time the chicks turned four weeks old, things started to get really hairy … err, feathery around here. They weren’t the fluffy chicks they once were; down had been replaced with real feathers, and the girls had a new set of priorities. Mainly using those new wings to launch themselves to the highest available perch, where they sat and preened their pretty little feathers.

They weren’t cheeping anymore either, in fact they had a whole new vocabulary and one of them in particular started to make a really awkward noise. We thought it was the Campine chick (the one who survived) and that she might be a rooster because she (he?) had also developed a more pronounced comb. But it could just be a difference in breed.

Ian was sure that the Campine was the one making the noise, but I hadn’t actually caught him (her?) in the act until one day when I took this video. Yep, pretty sure that’s a rooster. It’s too bad as we won’t be able to keep a rooster and he’s turning out to be such a pretty bird. But one out of nine isn’t so bad.

At the end of the week we did away with the heat lamp, instead turned up the heat in the living room a little bit. Up to around 70 to 75 degrees.

The chicks were too big for their box (which required frequent cleaning) and I felt terrible leaving them cooped up in there all day. So every day when I got home I took off the lid and they immediately hopped up to perch on the side of the box.

I called this their “playtime” and it usually lasted an hour or so. They did require a bit of supervision… a couple times I had left the room and came back to find one of them running around out on the floor. It’s stress-inducing to say the least. We felt like we’re catching a glimpse of what it’s like to be parents!

This was the week we talked to Rick and agreed to split up the birds to make the situation more manageable. We didn’t need to worry about sharing a heat lamp since we weren’t using it anymore, and we had our own feeders so he could have those back. Rick rigged up a brooder box at his house for his cornish roaster, black sexlink, silver-spangled hamburg, and the mystery bird.

That left us with five: a rooster and four layers for Ian’s parents. We had invested in a large water feeder and switched to non-medicated chick feed (or rather developer feed, for this in-between stage) which comes in a 20-lb bag and is made from local grains.

I’m felt overwhelmed even with just five young chickens in our living room, so I made them a bigger box with more space to roost and put it by the window so they got a decent amount of sunlight. I think they were less cramped and I didn’t have to let them out for “playtime” since they had a little playground of branches built into the box. That meant less clean-up for me, but I still wished I could have given them time outside.

We don’t have a fenced-in yard and our landlord didn’t even know we had them, so they had to until we could take them to Helena to live with Ian’s parents. He agreed to take them over the weekend and he had time to work on the coop while he was there.

The chicks were wary of this new set-up; the was is positioned over what must have appeared (to them) as a precipice, plunging down to the floor while their main box sat on top a table near the window. If they fell down to the bottom, they had to hop back up using the branches I provided. It looked like they weren’t too keen on the idea. But after a few days they got more adventurous, and I was glad to see them experimenting in the playground I made for them.

Oh – and our mystery bird? Turned out she’s the Lakenvelder. What we thought was a Lakenvelder was actually an Ancona hen. The two breeds looked so similar that things got a little switched up. Rick took the Lakenvelder home, but we were ok with the switch. We’d grown attached to Spock and I think she’ll be a good layer.

Came home on Friday… no chicks. The house was so quiet without their chirping! But I could finally get some spring cleaning done and expect it to stay clean.

Ian was in Helena working on the chicken coop, and his parents have constructed a makeshift coop in their back yard our of our brooder box, some chicken wire, a tarp and an old sleeping bag. It was important for them to have this time to get to know their chickens, and for the chickens to get to know the yard and their new owners. Not to mention the dog! I hoped that they would be able to get along, but I know that not all dogs can be trained to be friendly around chickens.

I was also worried about their transition to the outside and colder temperatures, but it sounded like they were doing fine. The nights had been warm and their brooder was protected from the elements. Besides, they stayed pretty cozy by huddling together.

Since our chicks were gone, I went to visit Rick’s this week. He moved the cornish roaster in with the adult chickens. She was really huge! Nearly as big as the rest, but not really a contender for high status on in pecking order. She couldn’t get up onto the roost by herself, and spent most of her time just lying around.

I hate to say it but she was a bit of a franken-chicken; nothing but boob, the product of selective breeding. Almost anytime you get chicken from a store or restaurant, you can bet it came from a hen like her. Only instead of being raised in someone’s backyard they’re kept in a cramped warehouse from hatch to slaughter. I’m glad we saved her from that fate at least.

Ian didn’t have time to finish the coop, so they stayed in their makeshift brooder for another week. Rick was waiting for his three chicks to get bigger before moving them into the coop with his adult flock. They needed to be able to hold their own against the other hens in case a fight ensued at the res-establishing of the pecking order.

We headed back to Helena to visit the chicks and finish our coop. We were a bit worried about how the dog might react to chickens in his yard, but they actually get along just fine. Ken and Karen eased him into it of course – letting him sniff around their (closed) pen, then letting the chickens out while he was on a leash, until they were sure he didn’t want one of them for his next meal.

Mostly Barney just regarded them with curiosity, and sometimes he’ll felt playful and wanted to chase them around. They were wary of him but by the time they’re full-grown adults I’m sure everyone will get along quite nicely.

Now that the ladies had some room to run around, it was easier to observe certain behaviors. They settled into an order (looked like the black sexlink, who Karen named Cinder, was at the top) and they tended to move around the yard in a loose group with the rooster leading the way. He liked to keep his ladies in line, but he also seemed protective so I like to think they felt some sense of security while he’s around.

Unfortunately, his crows were getting louder every week. The neighbors professed they didn’t mind but I’m sure they would by the time he’s full-grown. And roosters are illegal within city limits. So I placed an ad on Craigslist for a free Campine Rooster.

The next day he found a home with a couple who live outside the city – they’ve got free-range hens they want to breed him with. So long, Captain Peckhard! I know he’ll be happy there with twice as many ladies under his command. Maybe we should’ve called him Kirk…

Stay tuned for my next edition of the Chicken Chronicles in which we introduce our flock to their custom-built coop!