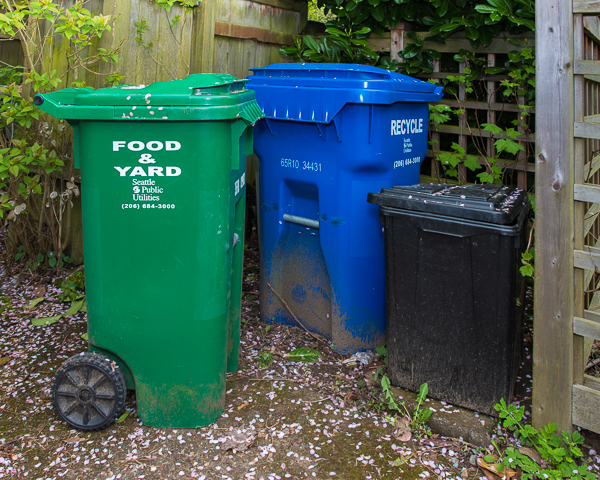 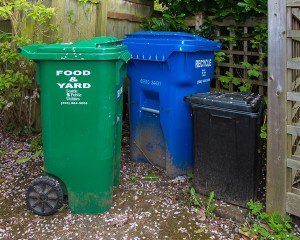 Every Monday morning, a big green truck drives down our alley and a man races to dump the neighborhood’s green food and yard waste bins into it. And when I walk to the Post Office, I pass a truck collecting food waste from bins behind several nearby restaurants. Where do those food scraps go?

In Washington’s King County most of that waste ends up heading to one of two Cedar Grove Composting facilities where it is mixed with grass clippings, yard waste, and other wood scrap. A visit to Cedar Grove is a fascinating and educational view into the use of unique technology to turn dross into gold.

All aboard, join me on our tour and you’ll be amazed!

But First, A Bit of History

In the late 1930s Seattle Disposal Company was founded. It was a waste disposal company – or in the lingo of the day: “garbage collector” – that was visionary enough to grow into one of the largest waste management companies in the Northwest.

Today known as Emerald Services, the company was an leader in recycling and, in the 1980s, set up innovative paper recycling programs for Seattle businesses. It was also in the 80s that Emerald’s sister company, Cedar Grove Composting, was formed with an eye to capturing organic waste from conventional garbage destined for landfills and to compost it.

About that time Emerald began shifting from waste disposal to recycling oil and wastewater as a marine and industrial tank cleaning company. Today Emerald offers oil and solvent recycling, non-hazardous and hazardous waste management, and tank cleaning for the transportation, marine, and military industries.

Let’s Get Started On Our Tour

The Cedar Grove processing and recycling facility in Everett, WA, is just 40 miles north of Seattle, a straight shot up I-5. Suffice it to say, you can’t get there from here! A little jogging around, a U-turn here and there, and you’ll get to Cedar Grove’s drive.

Put on your cap, your windbreaker, and your sunglasses – it is, after all, one of those rare sunny spring days! If it were raining, you’d need a pair of boots; not because you’d be stepping in anything nasty, but because the pavement on which the facility is built is slightly tipped in various places to allow for water management, and there will be puddles. Oh, yes, don’t forget your safety vest; the drivers of those big trucks and front-end loaders need to see you.

Now, open your car door, get out, and take a deep breath. Yes, that’s what I said… A deeeeep breath… Surprised? The first thing you notice is the smell of dirt. Not “dirt” as in dirty, but “dirt” as in soil – humus.

Cedar Grove composts more than 350,000 tons of food and yard waste every year, and the process is orchestrated like a ballet. Trucks come in, stop on the scale, dump their loads, and exit in short order.

Unlike the solid waste landfills of years gone by, when garbage (which used to be as much as 1/3 to 1/2 food waste) had time to build up an over-powering repulsive smell, the food waste collected here has very little time to give off much odor. True, food that sits for hours, or days, in a trash bin is not particularly sweet smelling; but it doesn’t sit for much time in the receiving building. The receiving or “tipping” building is not particularly large – just 15,000 square feet – and it’s located on a slightly sloping floor to collect any liquids that run off.

Our tour guide, Denise Bartlett, Manager Organic Soil Solutions, tells us that to prevent odors from escaping, a 75-horse power fan completes 5 air exchanges per hour. The exhausted air is passed through a bio filter made of wood chips and compost that scrubs the air to remove any remaining odor.

As we head toward the receiving building, a quick glance up shows us just a few birds passing overhead and a very handsome eagle perched on a lamppost. There are not the masses of crows and gulls one might expect in a facility that handles hundreds of thousands of pounds of food scrap.

Incoming waste – or feedstock – is made up of about 20% food waste and 80% yard waste and grass clippings. It’s ground and mixed inside the receiving building according to a “recipe” that follows a prescribed ratio of nitrogen (green or living matter) and carbon (brown or dead matter) and is inoculated with an amount of aged compost. The bacteria in the compost acts much like yeast in bread dough, like a “starter.” The compost forms naturally, but a little starter gets it going faster.

The fresh compost is then moved via an extensive conveyor system past a powerful electro-magnet to remove any metal items that remain in the mixture. Everything from nails and wire to pruning shears is captured and ultimately sold to a metal recycler. It’s surprising to see what actually makes it through the grinder/mixer and gets pulled out by the magnet!

The conveyor system is an engineering miracle, aerating the product as it is moved – and dropped – from one section to the next until it reaches the point where the young compost is put into long piles to age.

To go from raw material to finished compost takes about 60 days: Stage One – the “thermophylic phase” lasts 4 weeks; Stage Two – the maturation phase lasts 2 weeks; and Stage Three – the final curing phase, takes 2 more weeks. The compost is then aged for nine months or more. The Cedar Grove compost you buy this spring for your garden was probably made of food waste and grass clippings you put in your curbside bin last year.

The majority of the space needed for production of finished compost is taken up by these piles, measuring 164 feet long, 26 feet wide, and 10 feet high. The piles are constructed on top of a set of troughs that perform two functions: collection of leachate (waste water) and aeration.

Each of these long piles is covered with a wide roll of something that looks like canvas, but is really much more “native” to the Pacific Northwest. A lot of fun is made of Seattleites who seem to live in their Gore-Tex® jackets and fleece vests. These piles of maturing compost are wearing their own version of Gore-Tex, called GORE™ Cover.

The fabric cover is tucked around each long pile to prevent rain and surface water from wetting the compost and to minimize odor. Inserted at various points along the length of the pile are sensors that measure the temperature and the oxygen level of the organic matter.

The actual production of compost is a combination of bacterial action and heat. The bacteria breaking down the waste need air and moisture like any other living organism and, as a by-product of their action, heat is generated.

Connected to each pile of compost – and turned on and off by the sensors – is an aeration fan. As you walk past the piles in the first and second stages of maturation, you will hear the fans switching on and off. And you can see the covers rising and settling over the compost, almost as if they are breathing. Come to think of it, they are… those hardworking aerobic bacteria are breathing in and out too.

The final step before the compost is delivered to the customer or to the bagging facility, it is screened in a giant rotating “sifter” – measuring about 6 feet in diameter. Any large pieces remaining will be recycled through the system and added to the feedstock at the beginning of the process.

Aged and cured compost is sold by the truckload to commercial landscapers, to various government entities, and to farmers. It is also bagged for retail sale to home gardeners.

Raw product – feedstock – comes in at the northeastern corner of the facility and after each process is continually moved toward the southeastern corner. The finished product is inventoried in very large covered mounds until it is needed.

And like any manufacturing plant, the facility must be kept tidy. While we explored between the extensive conveyor system and the piles of compost, a truck regularly passed us spraying water to keep down dust.

As committed home gardeners, we understand the value of healthy compost as nutrition for our soil. The Rodale Book of Composting tells us:

The history of compost is both ancient and modern. Compost was recognized, as early as ancient Rome and probably before, as a transitional force in the life cycle. For at least 2000 years, people depended on compost to sustain croplands and to feed themselves. It was not until the nineteenth century, in fact, that we began to substitute chemical fertilizers for compost in the new “scientific” method of farming.

We tip our collective hats to Cedar Grove Composting for working throughout our region to capture waste that historically ended up in landfills and to turn it into a clean organic product to nurture our garden. Since 1989, Cedar Grove has produced almost 4 million yards of compost, topsoil, potting soil, Booster Blend, Vegetable Garden Mix, Lawn Performance Blend, and landscape mulch.