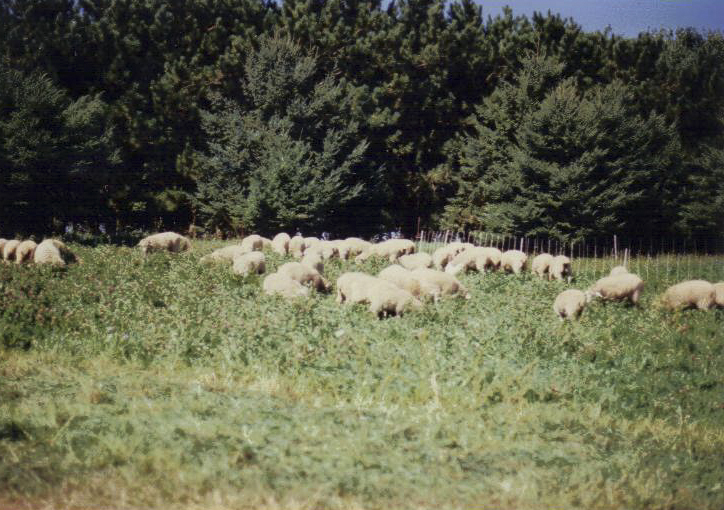 May: Sales of ewe lambs started early this year. Mike, who had spent a good amount of time on our farm as a youngster, was now grown and recently married. He, and his bride, Sherry, purchased two ewe lambs to start a flock, with an agreement that they would bring their ewes back in the fall to be bred along with my ewe lambs, and thereby save them the trouble and expense of getting a ram.

Mike was quite an innovator, and came up with some small grain feeders made from rain gutters. He shared a couple of these with me, and they worked very well in the bottle lambs pen… much better than what I had devised!

June: Paul, an old friend from the South East Minnesota Sheep Producers Association (SEMSPA), and his friend and neighbor, Loren, from the Pine Island area, came and purchased 65 ewe lambs… 32 for Paul, 33 for Loren. This pretty much depleted my stock of ewe lambs, except for a few to add to my own flock. Also that month, Sean hayed the first cutting of our 9-acre alfalfa field, and the big hay loft had a good start toward being filled! It was a great to see a beautiful hay crop in the barn and know the sheep would be well fed the following winter.

August: One day I received a strange phone call from a gentleman with a deep voice, and a heavy Mid-eastern accent. He announced, “Dees ees de Casablanca Restaurant,” and then asked, “Do you have lamb?” I at first thought this was some wag pulling my leg, but as he continued the conversation, I realized he was serious. He wanted to purchase a small lamb, “Not too beeg.”

The smallest lamb I had at that time was about 100 pounds, which would be a “small” lamb to me, as most of my locker lamb customers preferred a lamb of 115 to 120 pounds on average. We discussed the matter of size further, but it was obvious that our individual concepts of what constituted a “small lamb” were somewhat vague.

Finally, he thought what I described sounded okay, and he went on to give directions as to how he wanted the lamb processed at the locker. He wanted the lamb dressed, the carcass left whole, with the head on, but the head skinned, and the eyes left in.

I was having a hard time getting my head around this vision, but he went on to say that the lamb was to be for a special party, and being a chef, he would dress the carcass up with grapes and other fruits to make it look “pretty.”

I had my doubts about that, but then thought, perhaps it was akin to a roast pig with an apple in its mouth, so I agreed to discuss this with my locker, and see if they were willing to work with me. The locker did think the whole deal was pretty weird, but they agreed to go along with the customer’s wishes, so as soon as they had an opening I delivered the lamb to the locker.

When the lamb had been slaughtered, dressed as directed, and hung to age for a few days, I called and made arrangements for delivery of the lamb carcass to the restaurant, which was in Onalaska, WI. This was not going to be an easy task, as the lamb, after being hung for several days, with legs outstretched, was more than 5 feet in length overall, and a very unwieldy burden to carry. So of course, I enlisted the aid of Sean in the undertaking!

The locker furnished us with a large sheet of white wrapping paper to put in the bed of my truck, on which to lay the carcass. The truck had a “topper” to cover the bed. The locker also gave us several sheets of tissue paper to cover the lamb’s gruesome head during the transfer to the restaurant.

We drove to Onalaska, and according to directions, parked in a lot at the rear of the restaurant. We found we next had to descend about a dozen steep and narrow stone steps with stone walls on each side, so Sean had to carry the unwieldy carcass with his arms stretched above him, and with the head facing down the steps and the hind legs outstretched behind him.

I still don’t know how he managed to accomplish this feat, but when we reached the bottom we still had to negotiate a narrow passageway to reach the back door of the restaurant. Our plan was that I would open the door, step in and hold the tissue papers over the lambs head as Sean entered.

Of course, when we reached the door, it opened out, so we had to go past it. I then had to open it so Sean could back into the restaurant while still carrying the lamb with his arms stretched over his head. During this maneuver I lost the ability to keep the tissues over the lambs head, and once inside we realized we were facing a room full of diners staring in shock at the apparition before them.

The proprietor quickly motioned us to back into the small kitchen to our left, where Sean could at last deposit the carcass on a freezer top. Our customer looked at us in astonishment and asked, “Dees ees lamb?” Unfortunately, he had anticipated a lamb of perhaps 24″ in length, his interpretation of a “small lamb.”

However the expedition was not a total loss, as he did serve lamb in various ways in his Mideastern cuisine, so he would utilize it, just not in the way he had intended. It was certainly a learning experience for all of us!

A little later in the fall, I sold 10 locker lambs, including the one in the foregoing story, and another 5 ram lambs for breeding stock. These, along with the 67 ewe lambs sold earlier made for a very good year!

The remaining wether lambs (castrated males) were sold through the National Farmers Organization (NFO) Collection Point at Caledonia, MN. Unfortunately, the Corn Belt Lamb Tele-Auction had been losing ground for several years. As the packers in the area raised their prices in order to compete for lambs, the SEMSPA members living closer to those markets began selling their lambs there, rather than hauling the greater distance to SEMSPA’s pick up point at Chatfield.

This soon led to our Tele-Auction’s demise, as we needed the full participation of our members to keep the lamb loads going regularly. Despite joining with the Decorah, IA, Tele-Auction for some time to keep the loads going, the auctions finally came to a halt. We had a good market for about 7 years. I was fortunate to live only 3 miles from the NFO Collection point, and still managed to get a decent price for my lambs through the NFO.

The Minnesota Department of Sustainable Agriculture had recently launched a Competitive Grant Program, and I had spent a considerable amount of time that year working on a grant proposal, and got it finished and in by the deadline. Near the end of the year I was notified that my proposal had been accepted. I would have a 3 year demonstration grant, with a Field Day each year so interested members of the public could attend and see the results of our sustainable efforts.

The grant amount was $12,000, which could be used to cover various types of fencing, seeding pastures, or interseeding legumes to improve native grass pastures, in a sustainable rotational grazing system. All improvements had to be reported, along with the expenses incurred. Capital items were not allowed, except in an instance where an item was required in order to fulfill a certain part of a grant.

In my case, a portable walk-through scale with sort gates was approved, as I was weighing my lambs bi-monthly in order to determine the rate of gain for lambs on improved birdsfoot trefoil pastures alone, as opposed to lambs in confinement on full feed. I had managed thus far with a simple old platform scale, but it was a struggle to weigh a lamb on it, and would not be feasible when weighing a large number of lambs on a bi-monthly basis.

A couple of photos I wanted to share of our beautiful cat Honey. 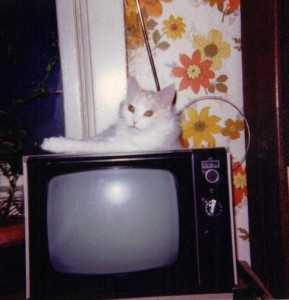 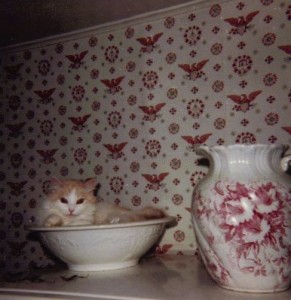