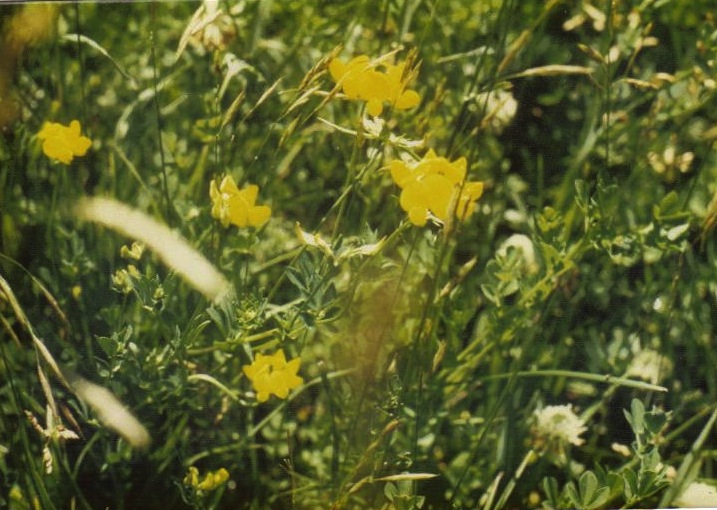 Mid-April: Lambing was over and our flock had given us another very good year, our 6th consecutive year for a 200%+ lamb crop! We were ecstatic! Highlights were:

Big Mumbo at 9 years of age had quads, but one fetus was being reabsorbed.

Big Jumbo, also 9 years, slacked off to having twins this year.

However, some of our younger ewes were coming into their most productive years and picked up the slack! 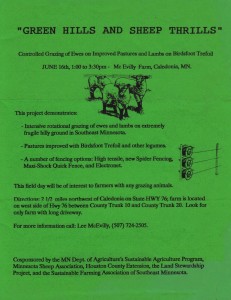 May: Sean was finishing up his first year at Western Wisconsin Technical College (WWTC), and was already busy getting tasks done in preparation for our upcoming Sustainable Agriculture Field Day in June. Our old friend from South East Minnesota Sheep Producers Association (SEMSPA), Hugh Kraemer, who now owned a Hi-Tensile Fencing supply company, K-Fence Systems, in Zumbro Falls, was acquainted with a New Zealander, John Wall, who was building high-tensile fences.

Hugh thought that since we were having a demonstration field day, John would be happy to build a section of “Spider Fence” for our Field Day, where people could have exposure to it, for free. We, of course, thought this would be great, so in late May, John and his “Kiwi Fence” crew came and constructed a section of Spider Fence to divide our front pasture. This was a very nice addition to our demonstration field day. I also prepared handout sheets on Birdsfoot Trefoil Establishment and Intensive Rotational Grazing.

June 16: We had a beautiful day for our Sustainable Ag Demonstration Field Day! We were demonstrating low-input pasture improvement by interseeding Birdsfoot Trefoil into native grass pastures with a no-till seeder, intensive rotational grazing using a paddock system, and several types of new and improved electric fencing systems.

We also had speakers from Minnesota Department of Agriculture, Albert Lea Vocational Technical College, The Land Stewardship Project, and K-Fence Systems. The event was covered by WXOW TV, La Crosse, Wisconsin, and was featured on the evening news program. Hugh Kraemer and Sean were constructing a 1/8 mile section of Spider Fence for a lane during the day, which was included in the filming by WXOW TV. I also had a live interview with Minnesota Public Radio which was aired. We got congratulatory calls from several friends in Northern Minnesota who were tuned in to the program.

We had 70 people in attendance and they were enthusiastic in their approval of the day. Many said they were inspired to try some of these techniques for their farms. They were free to walk all over, looking at types of fencing, examining the lush forages, and asking myriad questions!

All this was accomplished while the sheep and lambs were peacefully grazing in the orchard pasture, above the house, away from all the activity and traffic. All in all, it was a very successful day! 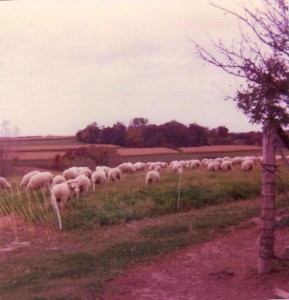 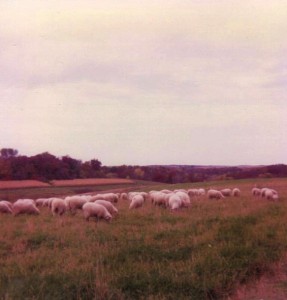 July: Our friends, Paul and Loren, who had purchased 65 ewe lambs last year, were back to buy 50 more ewe lambs this year, 25 for each. Paul also bought a ram lamb.

It was a very busy summer for Sean, as he started working full time for the John Deere Dealership in Caledonia, in addition to taking care of our own equipment, getting in the hay crops, and helping the neighbors with haying and other tasks. He was much in demand!

September: Sean was back in school at WWTC in his second year, and working after school and on Saturdays at the local John Deere dealership as a mechanic.

I got to participate, along with several other grazers, in making a rotational grazing video for the Land Stewardship Project. It turned out very nice, and I got a copy for free!

It had been an exciting summer! And by fall we had gotten in three crops of alfalfa hay without rain on it, so we figured we must be doing something right!

October: I was breeding 3 rams wearing marking harnesses, each with a different color crayon, to 3 different groups of ewes, to achieve the right gene splices. It is wise to have electric fencing that is carrying a good charge in these conditions!

I hired Richard Johnson, who owned a tractor driven post pounder, to come and pound wooden posts for the perimeter of our 9-acre Birdsfoot trefoil pasture on the ridge. Sean would install 5 strands of heavy weight high tensile wire in the spring, and we would be able to graze the whole field. Progress is wonderful!

Along with our ewe lamb sales for the year, I also sold 4 ram lambs, a yearling ram, a 2-year old ram, and 11 locker lambs. I was also processing the extra honey that my bees produced, and my locker, which also ran a small grocery store, purchased all the surplus honey I was willing to sell, which by that time was over 20 gallons. I was still recovering the locker lamb pelts and having them tanned, which added approximately $45 profit to each locker lamb after paying the shipping bill, and the tanner. It was all part of having a profitable, sustainable farming operation.

A winter project which was proposed by the National Farmers Organization (NFO), was to organize 11 Minnesota Counties and several Iowa Counties into an NFO Lamb Marketing Group. They would like Darla Baaken from the Decorah, IA, Tele-Auction site, and I, who had experience with the SEMSPA Tele-Auctions, to do the leg work of organizing.

I was not too keen on this, as I knew from experience what a job organizing a bunch of sheep producers was. Organizing farmers in general is hard, but usually the groups are more concentrated, whereas sheep producers are more spread out, and even more difficult to organize. I decided I must be getting old, but I had enough going on in my life, and my husband’s health, which had been bad for many years, was worsening.

I declined the opportunity.