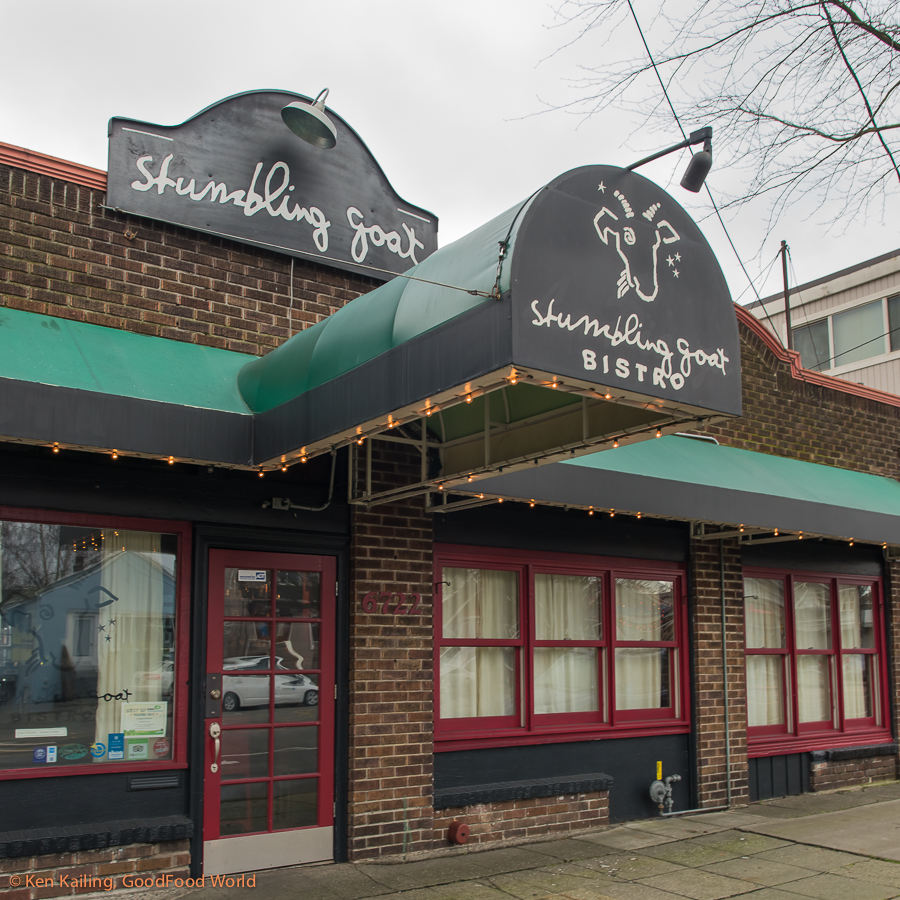 (Click on any image to see a larger version)

In a city where everyone seems to shop at one of the ten Seattle Farmers’ Markets, one of the 11 natural food co-op stores, or one of three Whole Foods Markets, a chef can be challenged to deliver on his or her claim of local sourcing.

The good news: Stumbling Goat Bistro’s Joshua Theilen has farmers, ranchers, cheesemakers, fishermen, and millers beating a path to his door. Stumbling Goat – a name that evolved from the title of the poem, “Drunken Boat*” – has been in operation for about 12 years and the focus has always been on local food; suppliers come knocking.

Theilen, chef at Stumbling Goat for the last several years, is a locally trained (Art Institute of Seattle) and awarded chef (Northwest Stir’s 2008 “Young Lion – Sous Chef” award) with experience in some of Seattle’s top restaurants and caterers.

A modest, soft-spoken fellow, Joshua is a working chef, something he truly loves. “I always wanted to work in a small restaurant where you are in touch with your customers,” says Theilen. “I left a large operation where the managing chef really didn’t do any cooking. Sometimes weeks would go by between times when I’d touch my knives.”

While you can’t quite see Puget Sound from Stumbling Goat’s front door (too many buildings block the view), it’s just minutes away. And that means local fish and other seafood. He gets fish from Neah Bay and the halibut is so fresh that the flesh is almost translucent.

In fact, northern Puget Sound is home to the giant Pacific octopus, and when Theilen offered a recent “game” dinner, he included octopus as wild game from the sea. It turns out octopus are not fished but hunted.

Working directly with local and regional producers takes time; time to develop a good relationship. Theilen is committed to his suppliers but because the bistro has fewer than 20 tables, its small footprint means small storage, and supplier relationships need to include meat that is cut to his specifications, smaller cuts, smaller boxes and bags, and frequent delivery.

“I don’t have refrigeration space to store a whole lamb properly, so I have an arrangement with a rancher who breaks the lamb down into primal cuts and delivers smaller amounts at a time,” says Theilen. “We work together. It’s a challenge for the farmer because every chef is different; we need different things.” That long-term relationship means Theilen and his co-workers get to visit the farms, meet the suppliers and their families, and get to know how the food is produced. 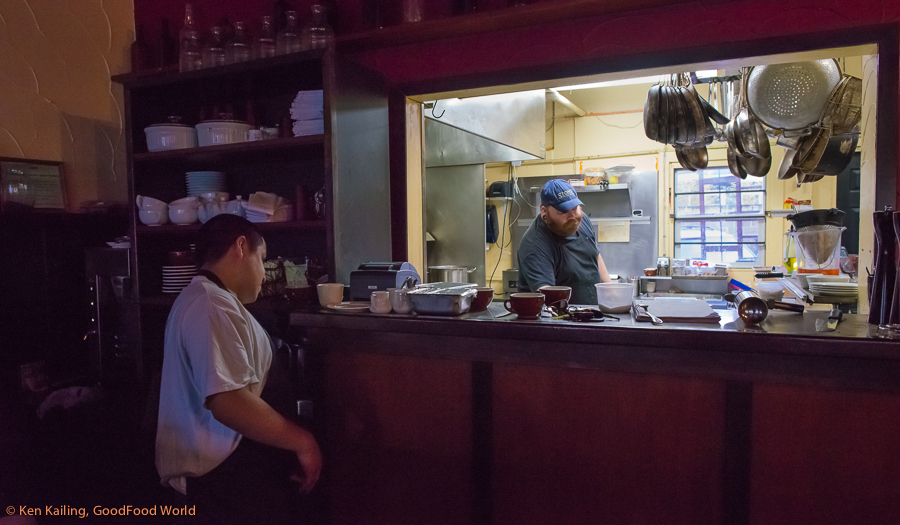 In Seattle, there are many restaurants that are careful about where they source their products, and the city is full of diners who are knowledgeable about food sources too. Stumbling Goat’s clientele understands the value of the restaurant’s selections; they know that Theilen and his staff care about good food.

In fact, you’ll find a list of all the restaurant’s suppliers on the back of the menu. When a new purveyor signs on, its name and website is added immediately so Stumbling Goat’s customers can make the connection.

“Most of my clients understand the value of the products I source – and the premium I sometimes have to pay,” says Theilen. “Occasionally we get what I call ‘right column shoppers’ who look at the price before they look at what the dish includes and how it’s made. Good food doesn’t have to be expensive, but it’s not cheap.”

A life as a working chef means working late and working weekends, and it can be hard when you have a young family. Joshua and his wife have a three-year-old, but that doesn’t mean they have to compromise on good food. Meat selections are mostly chicken, pork and fish with plenty of vegetables like kale and chard. With every dinner is a large salad.

“At home we’re very aware of good food and where it comes from; we eat a lot of organics,” says Theilen. “I really believe in our local food co-op, especially how they support local farmers and producers.”

Having a three-year-old doesn’t mean that he and his wife have to eat “kid food.” Not in this household! “The other day my daughter wanted farro, so we made curried farro with raisins. And last Monday we visited friends for dinner and she ate a big bowl of steamed clams.” Clearly Theilen is raising a young gourmand!

Consumers are becoming aware of the control that Big Food and Big Ag have over what they eat. At the same time, more people are seeking good food, both to cook at home and to eat in restaurants.

Says Theilen, “I believe there will always be people who care about good food. Food became so mechanized and over processed; no one knew how bad it was for us. We look for – and prepare – good food.”

The small farmers, ranchers, and fishermen that Stumbling Goat buys from, as Theilen says, “are some of the last standing.” In his small way, he is doing his best to make sure they have a market so they can survive. So that his daughter will be able to eat good food when she grows up.

*Drunken Boat (Le Bateau Ivre) is the title of a poem by the French poet Arthur Rimbaud. The Washington State Liquor Control Board refused to approve the name due to a prohibition statute that disallowed any reference to intoxication in a business name. Prohibition, by the way, ended in 1933.