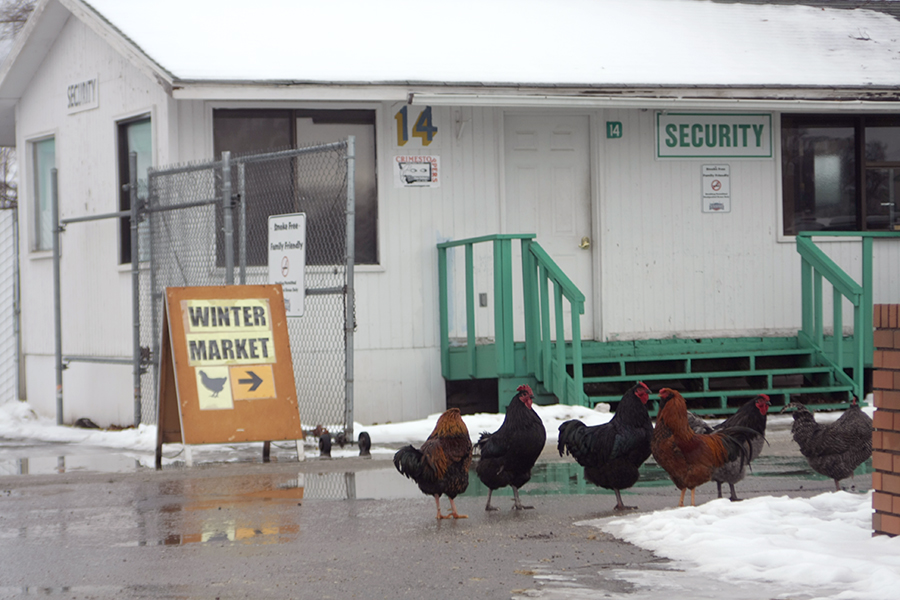 The seasons’ changing in Montana is so often unpredictable. You’re not guaranteed a fall here. One year we might have several beautiful weeks of changing colors, and the year next summer will abruptly fall off into grey skies with swirling snow. Spring is my least favorite, with slushy thaw days in between dumps of snow that don’t last long enough to be properly enjoyed.

Dreary days walking to work with muddy boots have me wishing for summer bike rides to the farmers market (without a winter hat on my head or a splash guard on my bike). I plan my schedule in anticipation of the season, asking for Saturday mornings off during the summer.

But as I recently discovered, I don’t have to wait. There are winter markets going on in Missoula – two of them! That might not seem like a big deal to someone from California or our states in the south, but up here where the growing season is short, it’s exciting news.

Our two markets are located across town from one another. The space is smaller and the vendors fewer than our summer markets, but they are growing every year.

This winter I’m only able to visit one of the markets – the Heirloom Winter Market at the fairgrounds. It’s across the road from the bookstore where I work; a thirty-minute lunch break is just enough time to zip over there on a Saturday to grab some produce or a sausage on a stick.

The Heirloom Market is one of many projects conceived by local mom and foodie Kristen Lee-Charlson. She’s a passionate advocate for food sustainability – from publishing a magazine on local foods to cooking and catering to organizing classes and serving on the board of our Community Food and Agriculture Coalition. She launched the Heirloom Winter Market as part of a larger community movement known as the Heirloom Project. It’s about creating access to fresh, local food, as well as educating the community on a number of topics from preserving to pig-butchering.

Lee-Charlson mans a table at the market each Saturday, passing on information about the Heirloom Project and its upcoming events and classes.

Rounding out the market are a handful of vendors : skilled craftsmen selling soaps and candles, others selling handmade cards and jewelry, a coffee bar that offers locally-roasted espresso and artisan sandwiches, a place to buy sausages made from Montana-grown pork, one guy selling eggs (who sold out even before I got there) and another selling locally-foraged mushrooms. My sweet tooth wasn’t disappointed either. There were cookies and mini pies, handmade caramels, artisan chocolates from Arlee and honey from Stevensville.

And even in the dead of winter, I can find produce there: garlic and onions, beets and collard greens, carrots and parsnips. When the Heirloom Market started in the fall, farmers set up tables there to sell their surplus vegetables. By the time I hear about the market in the spring, there’s only one produce table left.

Cue and Kyle Grogan of Grogans Harvest are selling the last of the season’s produce. Last year, Cue said, they ran out in December. This year they planned to hold out a bit longer and did a late planting in August. It lasted them through January, not bad considering the (three) other produce vendors at the winter market ran out and packed up in November. Maybe next year they’ll do a planting in August too, but I’m going to show up earlier just in case.

And when I do, I plan to bring some friends. When the demand for local produce grows, so will the supply; it’s possible even in winter if we support our local farmers. So if you haven’t already, check and see if there’s a winter market in your area. Food production doesn’t end when the summer market closes! If we remember that and buy local year-round, local economies and communities will flourish.

Although the market has been in underground operation for several years, this marks its first year as an official, certified farmers market.

What: Heirloom Market at the Fairgrounds
Where: Floriculture Building, Missoula County Fairgrounds
When: Every Saturday 11am-2pm from October to April