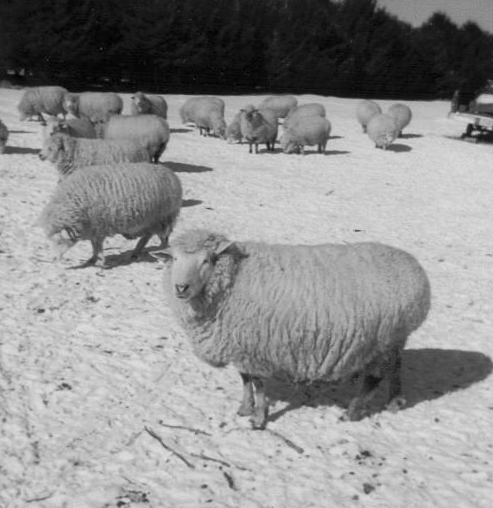 January 1985 – We again received our matching funds grant of $450 for the upcoming year, which was good, as we had a a full slate of promotions coming up! Luckily for me, Jeananne Warner agreed to Co-Chair the Lamb & Wool Promotion Committee with me! That took a lot of the pressure off me.

Jeananne was also the SEMSPA (South East Minnesota Sheep Producers Association) delegate to our state group, The MN Lamb & Wool Producers (MLWP). She made points for our group there, such as when MLWP learned we had come up with our own promotion booth display, they immediately wanted to “borrow” it. Jeananne firmly told them they could “rent” it, at $50 per promotion. What could they do? It was still much less than paying the freight bill on returning a booth display to Denver after each promotion.

February – Shearing time once again. With such a barn full of sheep, it was an exhausting and nerve wracking day, separating sheep into groups, moving the sheared groups out of the way, so the next group could be brought to the shearer. It went on all day. Along with someone helping move sheep, someone was packing the wool sacks, sweeping the shearing floor, catching the next sheep to be shorn, etc. Sometimes, we had two shearers working, which could made things move along faster, but was even more demanding of everyone involved.

Although, through age and attrition, we were losing quite a few of the older ewes born in the early 70’s, we were gaining ewe lambs every year. Our barn had reached its capacity, so once again we had to move a group to the granary pre-lambing, which at chore time, made extra work and took more time.

March – Lambing. We had an excellent year, reaching a 200% lamb crop again. However, we did lose a few lambs this year. “Big Mumbo” delivered quintuplets again, but only 3 survived. All were very small, one was mummified, and another only lived a short time after birth. In retrospect, I wondered if allowing her to raise all her quads herself the previous year had been too hard on her system. It was something to consider in the future, and this year we only left two of the lambs with her to raise. Her twin, “Big Jumbo,” had a healthy set of triplets.

June – After the lambs had been weaned, and the male feeder lambs were started on feed, along with their pasture next to the barn, I was approached by a new feed salesman to try a feed produced by his company. He was not my usual sales person, who happened to be ill at the time.

The only product I had purchased previously was a mineral mix containing selenium, which was essential to sheep in preventing a deficiency which caused weak muscles. Many of the soils in our area were lacking in this mineral, so the grains grown were also lacking in it, and it was necessary to supplement it in a salt/mineral mix made especially for sheep. This company had been the first to pioneer this product, and I had used it for a long time.

The new salesman however, was pressuring me to try a feed product they carried, which he constantly extolled the virtues of. I was not interested, as it was a product designed for calves, and I did not think it would necessarily be great for lambs. However, he persisted in telling me what a great product it was, and how much ‘so and so’ (naming other sheep producers) liked it, and he really thought I should try it. At last, after several of his visits, I finally said, “Okay! If you think it is really that great I will try it!”

I started the lambs on the feed by adding it as a top dressing on their usual grain, and they ate it readily. Gradually, they were switched over entirely to the product, and they loved it. However, within a couple weeks, they began to get sick… first one, then two, then more. They had dark scours, and I thought they must have come down with coccidiosis, although we had had no incidence of it, and I began treating their water.

It did not help, and more lambs were getting sick, one died. I called my vet to “post” the lamb, so we could hopefully find out what was going on. The vet, after posting the lamb, asked what I was feeding. I brought him an empty feed bag, and when he read the list of ingredients, he said he would be suspicious of the feed as it contained copper, which is toxic to sheep, and damaged their livers.

So began a long struggle to try and mitigate the damage. Two drugs were needed in the battle, they were: 1 gram of anhydrous sodium sulfate, administered orally daily per lamb, and 100 mg of ammonium molybdate, also administered orally daily per lamb. It takes a long time for the drugs to get rid of the liver damage, and during this time the lambs ate dirt, chewed wood, etc., in an attempt to adjust their systems to the toxin. We lost eleven lambs, and many others were stunted in their growth, and never attained their full potential.

Molybdenum is often found in mineral blocks, which would be a helpful thing to know if you suspected you might be subjecting your sheep to copper poisoning in some way.

I was thankful that my ewe lambs had not been exposed to this feed, as they were on pasture with only a small amount of corn or barley fed daily. We did not want them to grow out too fast. There was a theory that ewe lambs, grown out too rapidly, did not develop sufficient mammary tissue. The opposite of this contention seemed to be true in the case of our tiny triplet of past years, “Merrylegs,” who grew very slowly, and when fully matured developed a huge udder, of basketball proportions, which barely cleared the ground!

July – Our breeding stock sales continued to do well. Early in the month I sold 20 ewe lambs to Don and Mary Klauke of Dorchester, IA, and a few days later, sold 5 ewe lambs to John and Bonnie Smola of Monona, IA. Earlier in the spring we had sold 5 ewe bottle lambs, so we were whittling the ewe lambs down to a manageable number. In August we sold 2 ram lambs for breeding.

September – I began hauling the “freeezer” lambs to the locker at Hesper, IA. Although I hated this part of dealing with the sheep, it was a necessity, the same as hauling lambs to the tele-auction, and had to be dealt with, if one wanted to be profitable and stay in business. The sheep could not just be some pretty animals that looked nice out on the pastures.

This locker was of great help to me in my locker lamb business, as they charged a reasonable price, did an excellent job of cutting the orders to the customers’ specifications, and best of all their butcher was excellent. He handled the lambs gently, slaughtered them as humanely as possible, and removed the pelts carefully. This is important if one is intending to tan the pelts, as the tannery will discard a pelt if it has more than three small cuts on the outer edges, or even one cut in the center of the pelt, as it will tear in the tanning process. If anyone reading this is interested in recovering pelts for tanning, you should make sure that your butcher will work with you, and will avoid making knife cuts in the pelt when removing it.

October – Sean got off the school bus and found a small frightened puppy on the sheep guard at the end of our driveway. He came in carrying the puppy, and I took one look and thought, “Oh No… it’s a Border Collie.” I had seen enough Border Collies to know that they HAVE to work! They will “herd” sheep, cows, geese, ducks, or whatever lends itself to being herded. With my pasture system, and the fences involved, I did not need a Border Collie! The sheep knew the system, and they knew that I would move the fences daily, and give them access to fresh pasture. It worked perfectly… I did not need a Border Collie!

So I immediately started calling neighbors to see who might be missing a puppy. Strangely enough, all the neighbors had puppies, but none were missing. The only neighbors I did not reach on the phone were the Collerans, our neighbors to the North. We later learned they were gone on vacation at the time.

There was no answer to the puzzle of where the puppy came from for several weeks, during which “Dex” got himself firmly entrenched as a  member of the family! Then one day, Vernie Klug, our neighbor to the South, stopped by with one of the collection envelopes which periodically made the rounds of the neighborhood. When Vernie saw Dex, she declared,”That puppy looks just like the one that jumped out of the box and ran away when I tried to pick him up!”

I said, “I hope you’re not going to want him back at this point, as we are very attached to him!”

“Oh no”, she said, and then proceeded to relate the story of how they came to find a box full of puppies in their garage.

It seemed that their male farm collie had been paying periodic visits to our neighbor to the North, the Collerans, who owned a Purebred Border Collie female. This was the third batch of puppies resulting from these visits, and when this batch was eight weeks old and weaned, Bill Colleran had enough! He put all the puppies in a box, drove down to Klugs… apparently no one was home. He set the box of puppies in their garage, then he went on vacation. So that explains why every neighbor I called had a puppy!

There was a happy ending to the story, as Dex became the perfect dog for me! He never tried to herd sheep, but if I told him to “hold them,” he would stop them in their tracks and hold them there mesmerized, until I said “okay!” We had a gravity box wagon which we would get filled with corn, and it was parked near the north barn door so it was handy for me to get the corn to feed in the manger.

If the sheep were in the barnyard when I was getting grain from the wagon, they would hear the grain coming out the chute into a tub, and would start toward the sound at a dead run, but I would say “Hold ’em”, and Dex would stop them, hold them, and they would not move until I was done and had the corn safely in the barn. Then I would say “okay” and he would let them go. He was never rough with the sheep, but he surely had them under control.

Not a perfect year, with all the lamb losses due to the copper toxicity, but it could have been much worse. And I learned, the hard way, to “never trust what a feed salesman may tell you!”