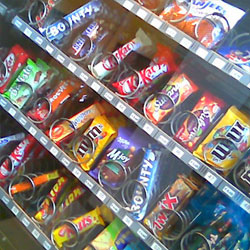 Here it is at last, well-documented investigation that shows how we have all been manipulated into bad health by the food industry; people who have literally made a killing off us by getting us hooked on synthetic food. The real corruption began a long time ago getting its real energy during World War II when government oversight of food processing grew weak (to naught), when money was directed toward industrialization in the war effort, when investors became powerful and rich. Then came TV. The new capitalists became the prophets of “modernism” and the golden age. Still, it took many more years and a lot of government program invention to destroy our independent small farm culture and our truly American (Jeffersonian) democratic idea about food.

Michael Moss’s article, “The Extraordinary Science of Addictive Junk Food,” appeared in The New York Times Magazine, February 20, 2013. It is adapted from Salt Sugar Fat: How the Food Giants Hooked Us to be published later this month by Random House. Moss is an investigative reporter for the Times and won a Pulitzer Prize in 2010 for his investigations into the Meat Industry.

The Extraordinary Science of Addictive Junk Food is a lengthy read (it prints out on 21 pages) but especially salient since it highlights a significant change in attitude about food in the US after World War II; an attitude deeply influenced by advertising through the new media, especially TV. And it is directly pertinent to me since it validates a lot of my personal conflicts having grown up on a small organic farm on the southwest fringe of Minneapolis in the 1950s with a mother dedicated to health and natural food. I was not allowed pop; she spiked my orange juice (more often our own apple/cherry juice) with brewer’s yeast; she put extra wheat germ in our oatmeal.

Later, I remember too well my mother-in-law’s anguish as a Wisconsin cheese maker being directed to add artificial flavors and fillers to her prized Mayville Cheese. Mayville is still a small, picturesque, farming town in east-central Wisconsin on the Rock River. I got married there in 1966 (when it had a population of about 4,000). Verna, my mother-in-law, worked at the Mayville Cheese Company. I remember the day she came home in tears because the company was being taken over by Kraft and the new regime was causing her to have to add “chemicals” to the cheese. 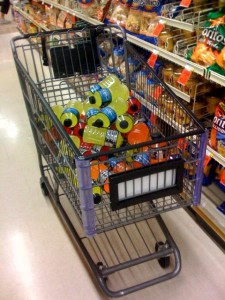 The post-war industrialization of food was well on its way in the US by the mid-1960s but had not yet reached small farm communities in the Midwest that held strongly to tradition. Of course, the corporations eventually moved in with the money and propaganda as they do everywhere today. They also captured the Federal Government; the US Department of Agriculture actively conspired with academia to give us a “better [food] living through chemistry!”

Those of us who experienced the post war years growing up in the new society remember the many TV commercials and the audacity of media stars like Ronald Regan hawking for General Electric; delivering the modern commercial epiphany! From that point, all our “new living” sermons started coming from Hollywood.

Perhaps we are experiencing a new reality regarding the short but intensive commercialization of food and the ills industrialization has brought. There may be a change in the making. Will it really address the deep systemic problems inherent to American Capitalism? I don’t know.

Whatever the outcome, I challenge you to read “The Extraordinary Science of Addictive Junk Food” and think about a government that places the power of profits above public health to the degree that it will legally allow a corporate body to add chemicals to food and market that food in ways that cause a significant number of its citizens to become terminally ill.

Diabetes kills! I know, my closest friend just died from the disease after suffering multiple amputations. (Yes, he was addicted to junk food.)