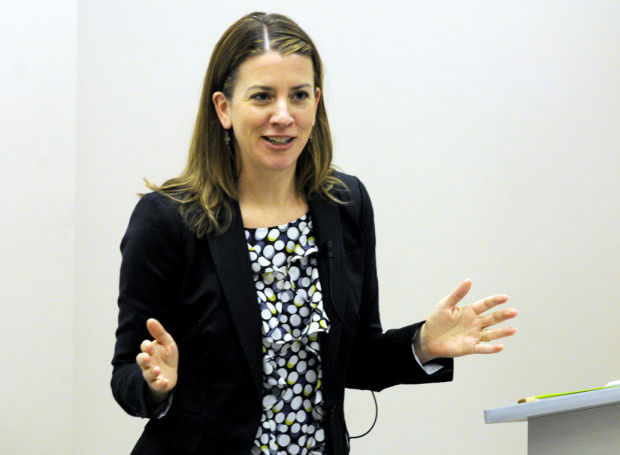 Do we need industrial agriculture to feed the world?

A while ago I came across a video online that answered this question.1 The answer, I was happy to find, was a resounding “No!” So often the argument against organic food is “you can’t feed the world that way,” and here the truth was being spoken so plainly, I felt that if everyone could see it we wouldn’t be arguing anymore.

More recently I was fortunate to meet the woman in the video, Anna Lappé. An accomplished author and sustainable food advocate, she was invited to speak at the University of Montana as part of the president’s lecture series. As soon as I heard she was coming to Missoula, I grabbed a copy of her book Diet for a Hot Planet and marked my calendar.

At lunchtime on February 4th we went to a small lecture hall to hear her speak in a talk titled “Eat the Sky: Connecting the Dots between Climate, Food and the Future of Farming.” Lappé opened with a report on Australia’s recent climate crisis and went on to talk about the certainty of similar events happening around the globe in upcoming years. This can only escalate if we continue with our industrial food system, which contributes to an estimated 1/3 of total greenhouse gas emissions.

Later that evening we made our way back to the university to see Lappé speak at the Dennison Theater. This time the topic was “Sustainability, Sustenance, and Social Change: How Sustainable Food and Farming Can Nourish the World and Transform Communities.” This time the venue was much larger, and the whole place was packed.

Again she painted a bleak picture, from mentions of childhood obesity to chemical-induced cancer to farms destroyed by drought and rapidly draining aquifers. But ultimately the message she left us with was a hopeful one. The right choices are obvious, the steps we must take are simple, and the rewards are great. Knowing that her words might make a lasting impression on any of the people present filled me with hope. If our food choices can be a chain reaction for change, then perhaps we can look forward to a brighter future.

There was only one point when I felt myself at odds with Lappé’s opinion – when a student raised the question: How can we afford to eat better food?

I half expected her to mention our local food co-op, where students can put in 3 hours a month in exchange for a low, fixed markup on bulk health foods and seasonal produce. Or to address the misconception that sustainable food is always more expensive. Instead Lappé answered the question by bringing up the issue of minimum wage. If we’re going to think about eating better, she said, then we need to address the issue of workers getting paid a fair wage in this country.

The answer caught me off guard. Sure, I’ve noticed that items at the local health food store can cost quite a bit more than the stuff at your average grocery. But I never thought that I should get a higher-paying job to support my healthy eating habit.

I know that many people struggle to get by. I also know that there are many luxuries we can live without. For me, good food is not one of them. A long time ago I made it my priority to eat well, and what I once thought of as a luxury I have come to understand as one of my rights.

It’s the right to choose what you put in your body – that means the right to know whether your food is processed, genetically modified, or sprayed with chemicals. And it means our right to access food that is fresh, healthy, and good for our planet. We need to fight for real food where it’s gone missing, and defend it wherever it exists.

To assume that good food costs more is to oversimplify the issue. Maybe we should not be asking ourselves what makes organic food so expensive; instead let’s take a look at what makes junk food so cheap. Billions of dollars are spent every year on subsidies for commodity crops – mainly corn and soybeans. That “food” isn’t even fit to go directly to our plates. Most of it is processed and packaged into junk food. But how many tax dollars are spent on subsidies for produce? One 2011 study on agricultural subsidies found that [the main ingredients of] Twinkies received 60 times more funding than apples.2,3,4

The situation is made worse by the fact that many of our poorest communities are located in so-called food deserts. Even if workers in these areas were paid a fair wage, they may not have access to the kind of healthy food they need.

When she talked about a fair wage, Anna Lappé highlighted one aspect of the problem. I only wish that instead of suggesting fair wages as a solution, she had returned to a point that was made in her speech earlier that day: the problem is the system itself. When asked what she thought was the biggest obstacle to reforming our food system, she answered: the influence of corporations on elected officials.

It struck a major chord with the audience, many of whom already buy local food for their families and wanted to know what else could be done to reform agriculture on a national level. As individuals our actions do make a difference, but the fact remains that much larger players are pulling the strings. Perhaps the most effective move we can make is to protest corporate influence and put pressure on our elected officials to instate sustainable agricultural practices.

Last week thousands of demonstrators did exactly that in Washington DC (our Ina among them). Here in Montana I took part in a similar (albeit smaller) rally on climate change. Until recently I thought that my choices at the grocery store were the biggest thing I could do to promote change.

But as Anna Lappé put it, we aren’t going to consume our way out of this. Our president has made promises; now he needs us to back him up and that means organizing around our values. I know how to make real food a priority in my life, and I’m beginning to understand how I can add my voice to the movement to make it a priority for the planet.