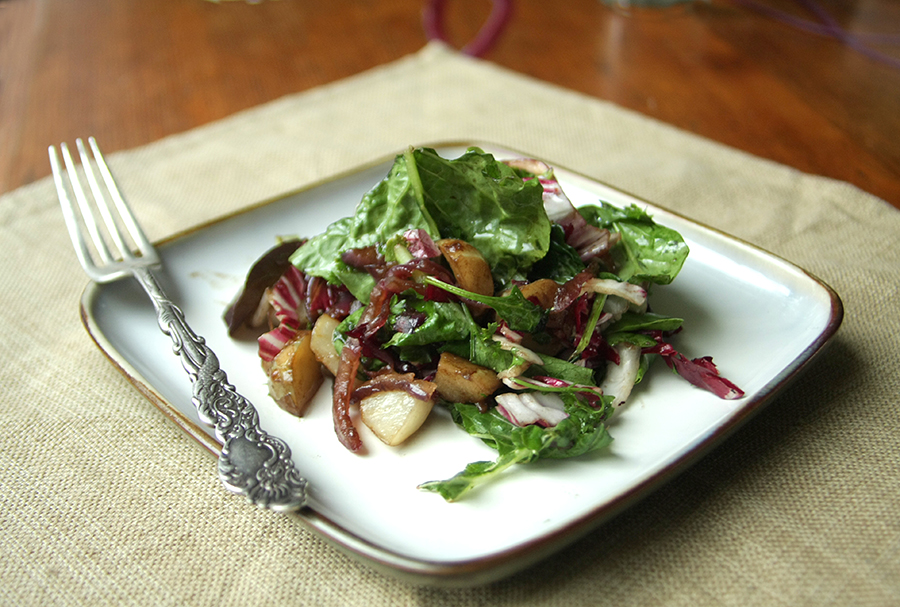 One of the best ways to broaden your food horizon is to be nosy in the check-out line at the grocery store. That is, if something in someone’s cart looks particularly interesting, ask them about what they’ve got or how they’re going to fix it.

I like to scope out what others are buying and try to guess what they’re making for dinner. It’s especially fun at the food co-op, where shoppers tend to be knowledgeable about food and creative with their recipes. There’s always something new in the seasonal produce and there’s always somebody around who knows how to cook it.

The other day I approached a lady with some small, knobby-looking potato things; she informed me that they were known as Jerusalem artichokes and tasted (amazingly) just like an artichoke except with the texture of a potato. I must admit it sounded too good to be true, so I had to see for myself. 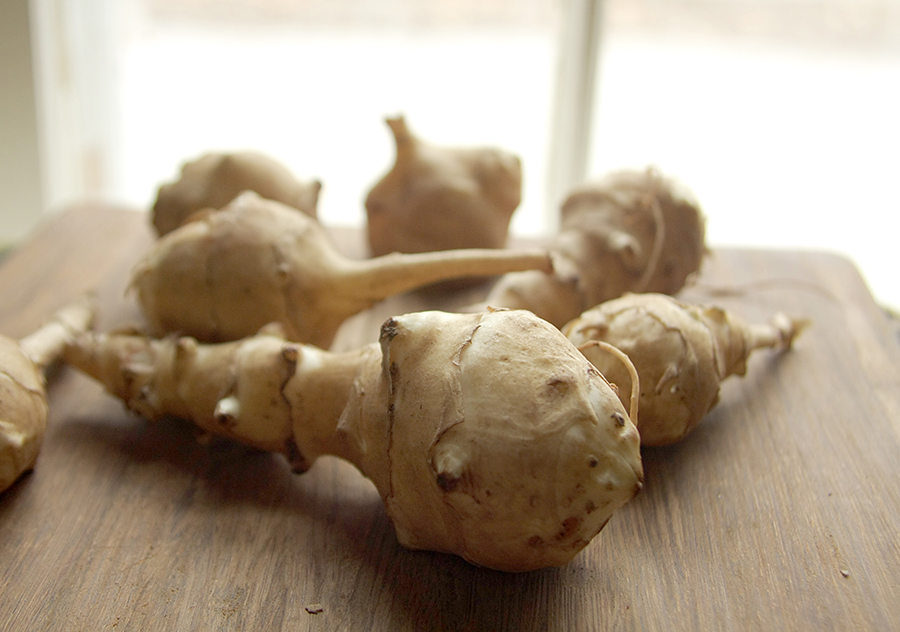 I brought some home and stuck them in our potato basket, assuming they were relatives and they’d get along well. Then I turned to our produce bible for a little background information on this peculiar tuber. It actually looks a lot like ginger, is not even closely related to the artichoke or Jerusalem, and is native to North America. They’re also called sunchokes, which makes a bit more sense considering the plant itself is a species of sunflower.

Nutritionally speaking, these little guys contain high amounts of dietary fiber, vitamin C, potassium and iron. Because they are low in starch and high in inulin (an inert carbohydrate), they’re likely to lower your blood glucose level rather than raise it (as starchy potatoes can). This makes Jerusalem artichokes a great choice for diabetics. However, if you’re susceptible to gassiness you should know that the inulin could cause that type of problem… just don’t eat them in excess and you should be fine!

Jerusalem artichokes make their first appearance in the fall (around October) and can be enjoyed throughout the winter and into March. Look for chokes that are firm and show no signs of green or sprouting. Store them in a cool, dark and dry place like the cellar or pantry, or keep them up to two weeks in a plastic bag in the refrigerator.

Like potatoes, these can be boiled, steamed, or roasted, sliced, mashed, or made into a soup (watch them carefully during cooking as they get quite soft and tend to collapse when overcooked – not a problem if you are pureeing the soup).

Unlike potatoes they are sometimes eaten raw, grated in salads or thinly sliced with dips. They’ve got a wonderful nutty, earthy flavor that pairs well with sweet and tangy ingredients like lemon, vinegar, orange, mustard mint, and chive. 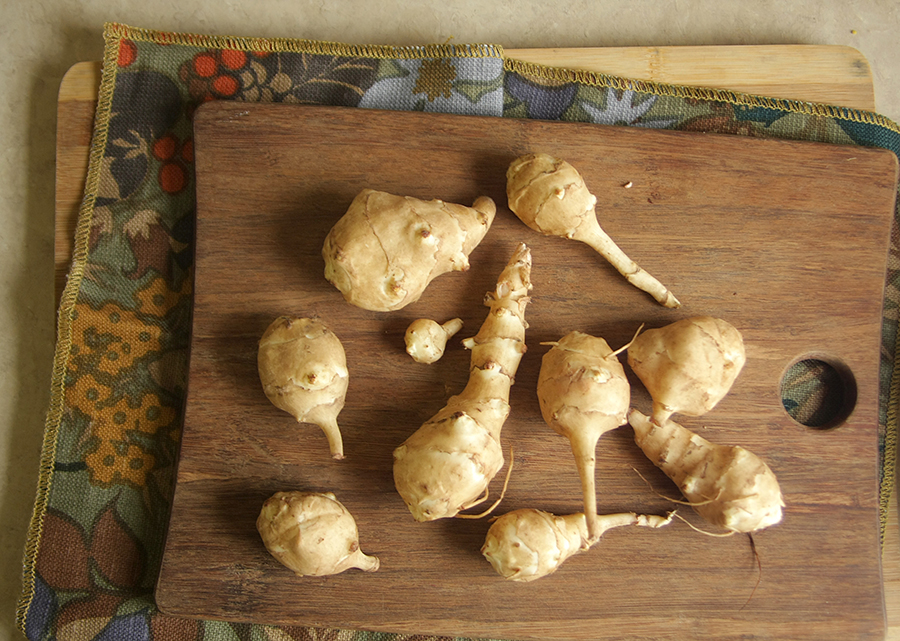 To prepare them, you can either peel them or simply give them a good scrub. Peeling can be difficult with the knobbier ones, but the skin is perfectly edible so it’s a matter of preference. If you are going to peel them, I’d suggest cutting off the smaller knobs with a paring knife first.

I enjoyed my artichokes in a warm salad with radicchio (another intriguing vegetable). It was Ian who took the initiative to cook them up one day for lunch, following a recipe from Jamie Oliver’s Cook. We’ve modified it only very slightly here. Feel free to substitute pancetta for the bacon or skip it entirely for a tasty vegetarian dish. 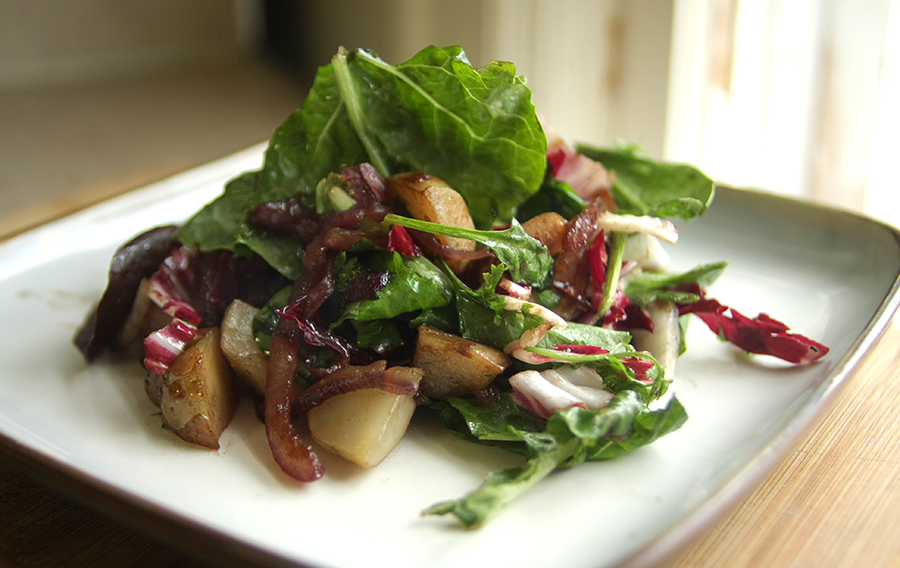 Bring some water to boil in a medium sized saucepan. Scrub the artichokes and cut any large ones to give pieces of roughly the same size. Place them in the boiling water and reduce the heat; simmer until just tender (able to pierce with a fork but still a little firm), about 10 minutes. Drain and when cool, slice them into large chunks and set aside.

Finely slice the radiccio (removing the core) and toss in a large bowl with the lettuce and parsley.

Slice the bacon into 1/2 inch pieces and fry it in a medium saucepan. While it’s still cooking, add the onion, and then the Jerusalem artichokes. Fry on medium heat until the bacon is crispy and the artichokes are golden. Then transfer the contents of the pan to another bowl, leaving what juices you can behind. To that add the olive oil and balsamic. Whisk everything together and add salt and pepper to taste. Then pour the dressing over the salad leaves and toss to coat.

On each plate, place a small pile of the artichokes, bacon, and onions, followed by a handful of lettuce and a few more artichokes on top. Eat quickly while the salad is still warm (and, if you care about presentation, before the lettuce starts to wilt!)