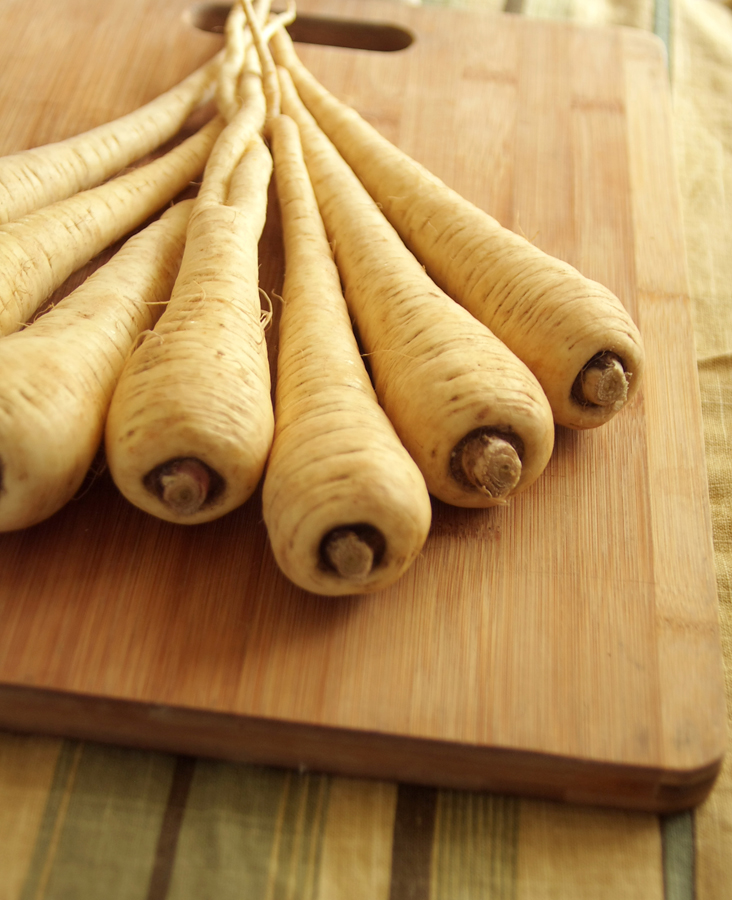 I had never before encountered a parsnip until the week they suddenly appeared in the bins at our food co-op. It’s a wonderful thing about this place we shop, that what’s available reflects a local and seasonal trend.

If I’m disappointed at the lack of raspberries in fall, I soon forget in my excitement at encountering new varieties of squash and root vegetables.

Parsnips can be counted among the roots and tubers – they’re closely related to carrots, no surprise considering their appearance. They’re woodier though, with a distinct earthy flavor.

I wouldn’t eat them raw, unless maybe you find some tiny, tender ones. They’re best when baked, roasted or steamed. According to my Produce Bible, boiling them causes them to be “water-logged and unpalatable.” Other things to note:

Can you turn this vegetable into something to dip in ketchup?

Absolutely! Someone recommended parsnip fries and I was immediately on board. It’s a foolproof way to sneak an unpopular veggie onto the plate of a picky eater.

A lot of people like to pair parsnips with rosemary. Well, wouldn’t ya know I had some growing in my windowsill – perfect!

I opted not to skin these fellows. I used to take it for granted that things like carrots, potatoes, and beets should be peeled before they’re eaten… but I’ve long since done away with peeling carrots, and then potatoes followed suit, and now I just don’t peel any vegetable if I can help it. When you throw away the peels you are tossing out flavor, texture, and nutrients.

It’s also a bit bothersome and perhaps not worth your time if all you get is a slight difference in texture. Give it a go anyway, you might like it. I actually prefer the results I get when I leave the veggies intact.

I’ve since read that the skins of parsnips are bitter, so if you find you don’t like the taste I’d peel them. Just make sure to scrub them first and remove any weird tough spots.

If you’re worried about pesticides, then peeling might be a good idea – the peels often retain the most residues.

Ever heard of the Dirty Dozen? These highly susceptible fruits and vegetables should be washed and peeled first. It’s something to take into consideration if you buy a lot of commercial produce. Parsnips are not on the list, but if you can get them from a local farmer, all the better.

One recipe recommended roasting the fries with whole sprigs of rosemary, which would then be crushed and sprinkled over the fries. I found that my sprigs just fell apart during the whole roasting deal, so next time I’ll smash them up and sprinkle them on with the salt and pepper before roasting.

I’m going to recommend that you eat these with a lamb burger on a homemade wheat bun with goat cheese. Make it a priority. Keep it in mind at least, because I’ll be sharing the bun recipe later. 🙂

In a large bowl, toss the parsnip fries with the olive oil and spices. Spread out on a large, heavy-bottomed backing sheet and bake for 30 to 40 minutes or until golden and crispy, turning the fries over every so often.

If you cut them into little matchsticks, they’ll take less time to cook. Mine were a bit thicker and took about 45 minutes.

To cut them into even-sized pieces, first cut the parsnips in half or in thirds crosswise. I found that some of the more spindly tips didn’t need further dicing, while the thicker ends had to be halved again lengthwise and cut into smaller pieces.