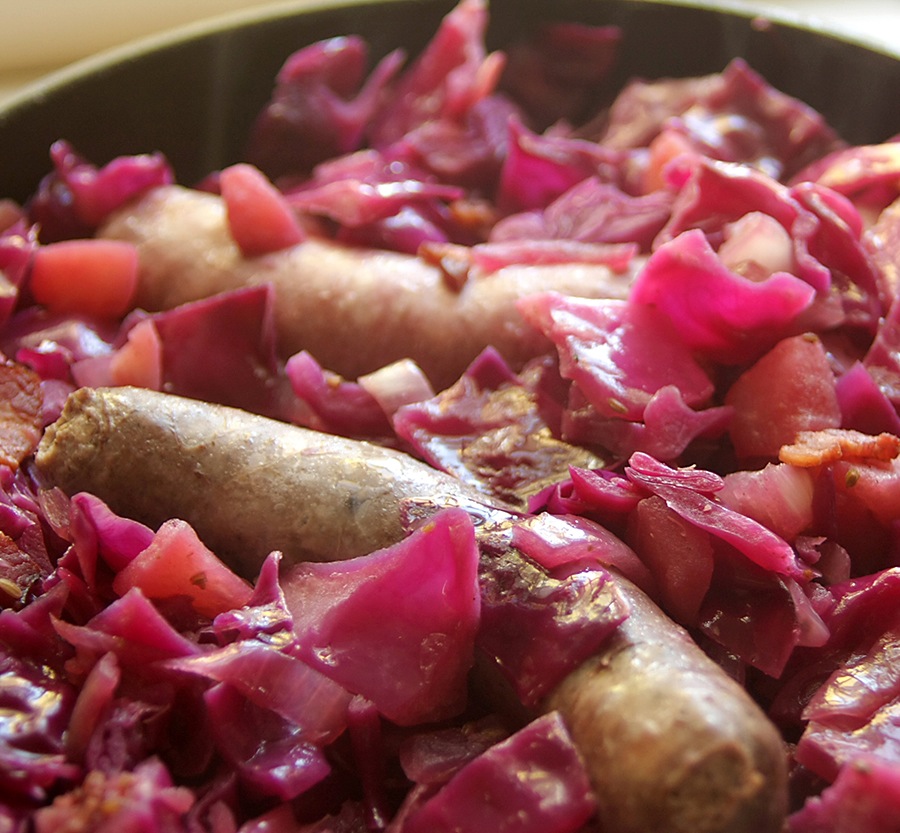 I’m from a generation that grew up with a meat-and-potatoes mindset. A is for apple… not artichoke or arugula. We didn’t eat those strange fruits and vegetables because we didn’t think that we should, or maybe we didn’t really know it was an option. Monocultures and commodity crops were the norm – everything else got pushed into the margins, and we didn’t see beyond what was available at the supermarket.

In truth, the variety of edible herbs, fruits, and vegetables is far greater than the selection at your local supermarket, where foods like potatoes, carrots, and apples hog the spotlight. My goal is to shed some light on the lesser-known veggies. Many of them I’m sure you’ve heard of and probably eaten, but perhaps without frequency or enthusiasm.

The best sort of gardens have all varieties of vegetables growing side-by-side; your dinner plate should look the same if you want the very best in flavor and nutrition. The good news is that variety is making a comeback. People are learning all about heirloom tomatoes, local berries, and new varieties of beets and squash – at farmers markets, in restaurants, and at home. We are seeking out the wallflowers and asking them to dance. 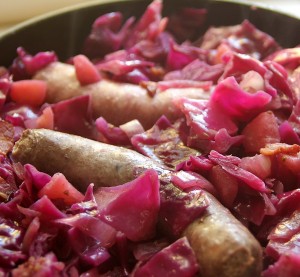 First up is red cabbage. I got a little soft spot for red cabbage when I went to the grocery store and found one cut in half… I asked the produce lady if I could take just half a head, and she said by all means, please do. She said that they didn’t sell as well as the green cabbage, and people were more likely to buy red if they only had to buy half a head. Poor red cabbage. But all the same, I just took the half (I’ve only got two mouths to feed here).

I had eaten red cabbage raw before – in coleslaw, and in sweet potato tacos. It wasn’t a favorite though, and I can’t say I’d really cooked with it. For advice on how to cook it, I turned to my celebrity chef crush Jamie Oliver. I am not one to obsess over TV personae, but I just can’t get enough of this guy. He promotes organic and sustainable food. He inspires disadvantaged youth to become chefs. He braises red cabbage with vinegar and bacon.

This one is based on a recipe in Cook with Jamie. In it he uses fennel seeds, the by-product of another lesser known vegetable. I’ll cover that one later, but I’ll say for now that the seeds are great in a lot of recipes (Don’t be put off by their licorice smell – I don’t like it either. Trust me.) 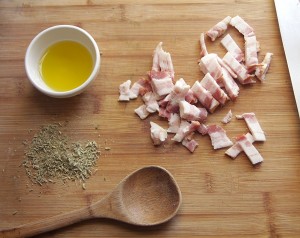 To mash up the seeds, (having misplaced the pestle to my mortar) I pressed them under a wooden spoon, pushing the heel of my hand into the concave surface of the spoon. It’s an easy way of crushing seeds and herbs on a cutting board if you don’t have a mortar & pestle handy. Crushing them releases their flavors and disperses them throughout the dish; you won’t get whole, chewy seeds in the end product.

The apple, bacon, and vinegar in the recipe make for a really sticky, sort of sweet-and-sour dish. It is a new favorite of mine, so I can happily say this experiment with a lesser-known vegetable was a great success. It goes well with pork chops or bratwurst, although you can omit all meat entirely for a tasty vegetarian side dish.The red cabbage does bleed into every other ingredient making the whole thing purple, so if you want some contrast at the end I suggest tossing some diced parsley on top for the presentation.

salt and pepper to taste

In a large saucepan over medium heat, pour a couple tablespoons of olive oil and when hot add the bacon and crushed fennel seeds. Cook until the bacon starts to get crispy; next add the onion and continue to cook for a few minutes until golden. Add the apple, cabbage, vinegar, salt and pepper, stirring everything together well. Put the lid on and reduce heat to low; continue to cook for at least 30 minutes. I wait until the cabbage is cooked through but still has a bit of crunch in it.

To make this dish a meal, I pulled two bratwursts out of the freezer and tucked them in with the cabbage right before I put the lid on. They cooked up beautifully and made a really great fall meal worthy of any October Fest celebration.