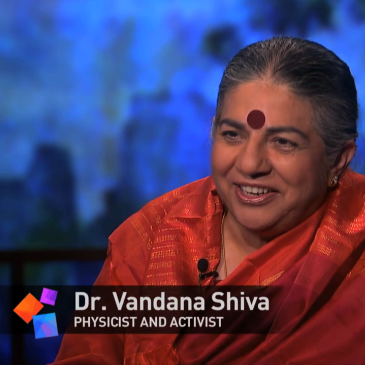 Scientist and philosopher Vandana Shiva explains how “everything begins with seed,” and addresses the perils of patenting them.

Genetically modified seeds — considered “intellectual property” by the big companies who own the patents — are globally marketed to monopolize food production and profits. Opponents challenge the safety of GM seeds, claiming they also harm the environment, are more costly, and leave local farmers deep in debt as well as dependent on suppliers.

Shiva, who founded a movement in India to promote native seeds, links genetic tinkering to problems in our ecology, economy, and humanity, and sees this as the latest battleground in the war on Planet Earth.