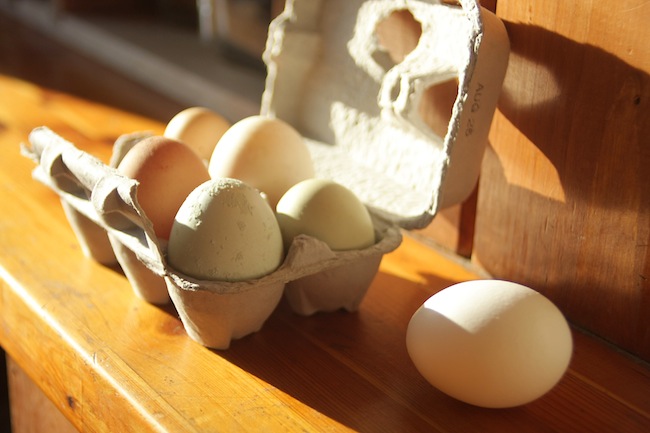 This month I made it my goal to connect with more friends who have an interest in good food. And I didn’t have to go very far… in fact, something really memorable happened by accident on the Fourth of July.

Ian and I climbed a hill to watch the fireworks, spreading out a blanket with wine and snacks. We sang songs and caught up with old friends, some who had been gone for nearly a year. Afterwards, they said goodbye to another old friend who had died that morning – a hen from their roommates’ chicken coop.  That night we held a funeral on the riverbank. They built a sturdy coffin-crate and packed it with kindling, intending to honor her in style.

Caesar was one of their original hens – they raised her from a chick and introduced her to the coop they built. In this house where my friends live like a family, the animals are members too. Caesar was not just a pet, but a contributing member of the household.

As the flames consumed the wooden box that housed her body, my friends gave thanks for the years of fresh eggs they’d received and the hours of entertainment she had provided. They threw in an apology for the many times they’d chased her around the yard and the one time they decided to adorn her with war paint. We shared a moment of silence. Then, in true Viking fashion, they pushed the little pyre down the river.

The next day I came back to their house to meet the rest of the flock. My friend Rick is the chickens’ primary caretaker; he showed me the feed-dispenser he’d built and introduced me to the other birds – Ellen, Ali, and Jeff. No roosters in this clan; the city outlaws them for being so noisy. But the girls (including Jeff) don’t need a rooster around to lay eggs. Like all other hens, they lay unfertilized eggs regularly and those are the ones we eat.

The hens lay an egg each almost every day, but their productivity has dropped off some in the last (their third) year. It’s not enough to feed the household, so Rick supplements their eggs with others bought from the store. And it’s easy to tell the difference – while his own hens’ eggs feature a rich, orangeish yolk and a thick viscous white, commercial eggs have a more watery white and their yolks are a pale yellow.

The higher quality eggs don’t come cheap –  at the store Ian and I pay $3.86 a carton for the type of eggs that come from our friends’ chickens. They come from an organic farm in the Moiese valley, about an hour north of Missoula. Occasionally we’ll open the carton to find a little newsletter from the farmer tucked inside.

But my favorite thing to see is the variety – eggs coming in all different colors and sizes. They represent nature’s natural diversity, a contrast to the commercial laying operations where hens in cages put out hundreds of uniform white eggs.

If you don’t have a place to buy local farm-fresh eggs, consider getting some chickens of your own. And after the initial preparations, your input will be fairly minimal.

First, you’ll have to check on the regulations in your area. Our city charges thirty dollars for a one-year permit and you’re allowed no more than six birds per lot. After convincing the landlord, our friends built a chicken coop and picked out four chicks. They converted an old terrarium into a brooder, and in little more than a month they were ready to take them outside.

What used to be a little strip of side-yard is now a chicken paradise. The fenced-off area next to the garden has plenty of shade, a compost bin to scratch in, and a cozy coop with a real tree branch to roost on. At least once a day they are let out to free range around the yard where they peck at bugs, worms and grass, making them very happy chickens. They’ll get a wider variety of nutrients in their diet (producing healthier eggs) and are less likely to get stressed.

Once the chickens have moved into the coop, you’ll just need to make sure they have clean food and water and change their bedding every so often (which is not so different from changing a litter box, and your cat doesn’t lay eggs for your breakfast).

But is it a good budget choice? This blogger certainly saved with his fresh eggs, and check out this article from the 1970’s. When eggs cost sixty cents a dozen, their chickens were producing eggs at less than 20 cents for the feed!

They didn’t profit right away. Like so many other good things, keeping chickens requires a little investment of time, money, and labor before your efforts really pay off. Still, it’s easy to improvise on the cheap. An old doghouse can be easily converted into a chicken coop. And if you let your birds free range, you’ll spend less money on store-bought feed.

If having your own chickens isn’t a viable option, try to connect with some folks who do. Eggs can be traded for favors, like babysitting their chickens for a weekend or turning them into a cake that you’re willing to share. I traded for some of my friends’ eggs and made them into a quiche.

Someday I hope to have my own chickens, but until then I’m satisfied with knowing my eggs come from happy hens. And although I may not know them personally, sometimes now when I crack an egg I’ll think of Caesar and send out a silent thanks to the animal it came from.