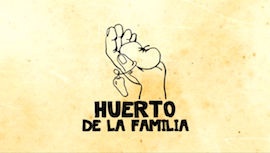 Hispanics suffer more hunger than any other group in the US and on June 2, 2012, a group of over 100 gathered in Eugene, Oregon to celebrate services that have helped Hispanic families feed themselves. The audience munched popcorn, sipped coffee, and had a variety of snacks to choose from as they filled a room at the First Methodist Church to view new locally made movies.

University of Oregon graduate student Chris Roddy created each of the films to highlight one of three projects of Huerto de la Familia/The Family Garden: organic family gardens, the Small Farmers Project, and the Micro Enterprise Project. In addition to the films, which were received with enthusiastic applause, Roddy has also developed a website and produced a book. The evening’s activities and Roddy’s productions all featured both English and Spanish languages.

Local non-profit Huerto de la Familia/The Family Garden was the focus of the movies and Roddy thanked the families and staff for allowing him to ‘stalk’ them with his camera for months as he captured images for the movies and for a companion book of photos about the families, the food, and the founder and Executive Director, Sarah Cantril.

Roddy gave credit for the film concept to one of the small farmers whose cousin is a producer. Roddy created the three films, book, and website for his master’s project using the Internet for distribution so browsers can access the movies in English or Spanish.

Huerto de la Familia/The Family Garden began in 1999 when a women’s garden plot was begun; in 2004 the non-profit was formed. Now over fifty families participate and the benefits they get filled the movie screen: happy children helping parents plant a garden, smiling women holding huge baskets of their harvest, and families working and talking together as they weed and water their plots.

The Small Farmers Project began as a Huerto de la Familia project but has recently ‘graduated’ and is now standing on its own as a cooperative farm business. The families produce organic strawberries and blackcap raspberries and have plans to expand to other crops.

The newest endeavor, Micro Enterprise Project, helps people develop a small business, providing training in recordkeeping, marketing, and management. Participants also learn the applicable laws and regulations and safety practices for food handling. One couple in the movie has launched a business in which they make and deliver tamales.

These movies help to share the good news that, even in a sluggish economy, people are working together to successfully address hunger and poverty, and Eugene’s food scene is richer for this good work.

Check out the other films and get more information at www.huertodelafamilia.org.

Susan W. Clark is a freelance writer and photographer focusing on sustainability. She lives on an organic farm near Canby, Oregon. Her blog, publication list, and clips are available here.