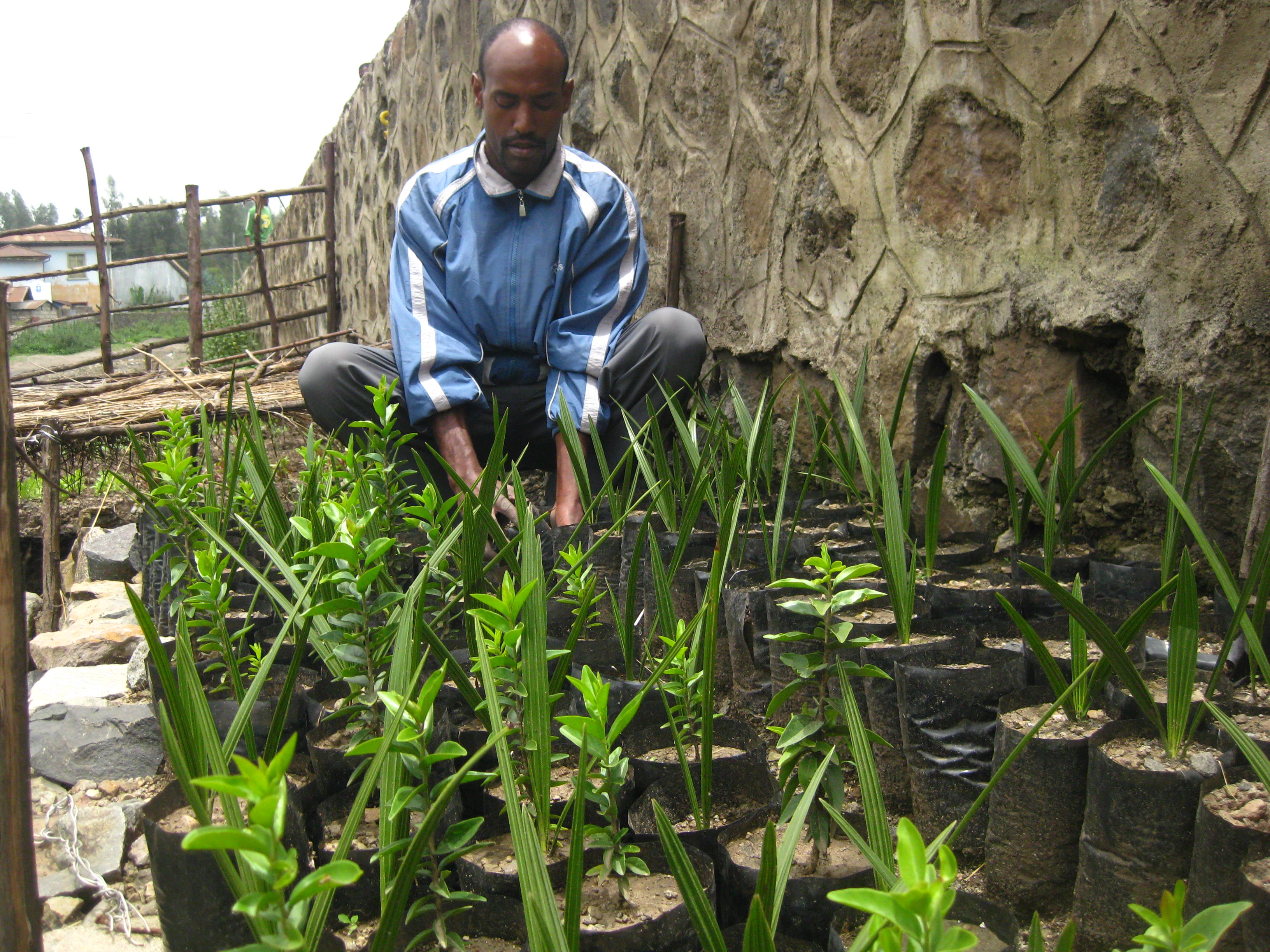 Sometimes when Samson Aberra is working in the garden, planting seedlings or replenishing his nursery, onlookers gather to watch him toil. What they don’t know is that Samson Aberra is not “toiling” — he’s barely working. In fact, he is doing what he loves: gardening.

Samson’s garden lies next to the main highway running through the Ethiopian highland town of Dessie, located in the northeast of the country. The garden forms a triangle between the main road and a contaminated stream that meanders through the city in its journey to the low lying plains below.

In 2009, the same land was ankle deep in plastic bags and bottles, worn out shoes and dead animals. Samson wondered why the city would allow the eyesore, not to mention the waste of land.

Samson acted on his longing and joined the USAID Urban Gardens Program (USAID UGP) through local implementing partner Netsebrak. They trained him in urban agriculture and gave him essential tools such as soil fertility, plant management and irrigation methods.

He approached the kebele, or neighborhood association, and described his vision to clean the land and plant vegetables.

From the Coast to the Mountains

Samson came a long way to get his hands on a 300 square meter garbage dump. He was born in the port town of Asmara, the capital city of Eritrea. His father was a soldier for the communist government and his mother ran a small restaurant out of their living room.

When the Derg ended its rule in 1991, his family faced a crisis, and 11 year old Samson landed in Dessie, where he cobbled together a shine box and polished shoes. Balancing the tight rope of survival, he was able to gain a 9th grade education.

His mother died ten years later at the same time his father was tested positive for HIV/AIDS. Samson was expected to take care of his five brothers and sisters and his sick father on an unsteady income of 5 birr (40 cents) a day.

“Life was up and down,” he says casually with a half smile.

Throughout 2010, Samson irrigated his garden from the contaminated river. He noticed the quality of his vegetables did not stack up to other products in the market. With his earnings he installed a municipal water line direct to his garden, bringing fresher better highland water to his urban garden.

Every month he pays 10 birr for the water and now has a product he can really be proud of. “Consumers need quality vegetables. It was an easy decision to make,” he says.

Samson grows a variety of vegetables as well as ornamental plants, which he sells in the market. He has embraced every tool USAID UGP has to offer including, fruit trees, compost piles and nurseries. Like a garden pro, he plans successive plantings and seedlings quietly wait their turn in his nursery.

Every month his garden earns him some 2,500 birr ($150 USD) and allows him to support five siblings as well as his bedridden father.

In mid 2010, the kebele administrators awarded Samson recognition for the “beautification of the neighborhood” making an example out his efforts to transform wasteland into sustainable land. Two of his fans have since hired Samson to come to their homes and build similar urban gardens.

With the increase in work, he took on two more gardeners whom he pays a monthly salary of 300 birr. “My interest in not only making money, but sharing my knowledge and skills in gardening. It’s so practical,” he says.

In early 2011, Samson got married and went back to the ninth grade to finish his education. His dream is to be an agricultural engineer.