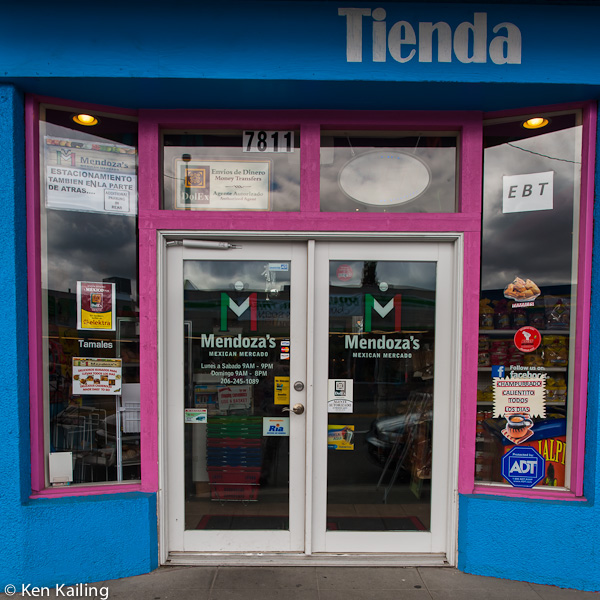 Drive through the older neighborhoods in most cities and you will discover the ghosts of mom-and-pop corner groceries. The telltale architecture – large glass windows on each side of a door that may have actually opened onto the corner – is still visible.

The late nineteenth and early twentieth centuries were the golden age of the independent family-owned and operated shops. During periods of rapid population growth, families moved into neighborhoods segregated by class and ethnicity and into the suburbs created by the installation of streetcars.

To meet the needs of these new neighborhoods, small family-run stores sprang up, generally reflecting the surrounding ethnic demographics. They often carried familiar foods that were hard to find elsewhere and conducted business in the native language of the owners and their customers.

In Chicago, for example, thousands of small neighborhood stores dotted Chicago’s urban landscape until the 1950s. The rise of the chain stores after World War I seriously challenged the dominance of the independent grocers.

Today, the retail food industry has evolved into an oligarchy where 4-6 supermarkets capture 60-70% of sales in a geographic market. Five supermarket chains sell more than 40% of all groceries, and Walmart alone captures 25% of all US grocery sales. In 29 metro areas, the Walmart accounts for more than half of all grocery spending.

In the face of daunting competition, an economic recession, and the unrelenting pressure by Walmart and other big box stores, small businesses continue to open and to flourish. Between 2007 and 2008 (the most recent data available), nearly 12,000 small businesses with fewer than 10 employees opened in the state of Washington.

What is it that keeps small independent retail stores – food stores as well as those offering all kinds of other products – starting even during the worst of times? It is these entrepreneurial qualities:

According to the 2008 Small Business Economy report, Hispanics saw a 91.3% increase in the number of self-employed between 2000 and 2006. Carlos and Sonia (Mendoza) Cervantes, and Sonia’s brothers Edgar and Gorge combined those entrepreneurial qualities and launched a family business: Mendoza’s Mexican Mercado, located in Seattle. In a county where nearly 7% of the population considers itself Hispanic/Latino, the market has the potential to reach more than a 128,000 customers.

In August 2010, Edgar Mendoza leased the building next to his small café, Barriga Llena, to open a small Mexican market. With help from Gorge, Sonia and Carlos bought the market from Edgar and opened the doors on their own in January 2011.

Married 18 years, Sonia and Carlos are still the only employees, working 12-hour days, seven days a week. “The store is my child,” Sonia says with a smile.

Coming from a family where cooking and selling food is “part of our blood,” they are committed to bringing the flavors of Mexico to Seattle. Many of dishes Sonia prepares and offers as ready to eat in the shop are family recipes; dishes “mi abuela hizo” – “My grandmother made…” – like carnitas, enchiladas, taquitos, and frijoles. Sonia’s corn tortillas have the “taste of home!”

Mendoza’s buys most of the market’s fresh produce from Washington’s Yakima Valley. The valley’s hot dry conditions make it possible to grow heat loving vegetables such as peppers within a reasonable distance. Special greens like epazote (sometimes called Mexican tea), huazontle (a relative of amaranth), and papalo (purslane) have smells and tastes that remind customers of their homes in Mexico.

While many Seattleites may not be willing to try the chapulines (grasshoppers), they are a popular high protein snack all the way from Oaxaca. For those less adventurous, the queso fresco that is always in the refrigerator case is a creamy, mild, fresh cheese that balances spicy and flavorful meat dishes.

Faced with two challenges that place a particularly heavy burden on small businesses – the vast web of laws and public policies that directly disadvantage small and local businesses and the access to capital – Sonia and Carlos are determined to succeed.

Many small businesses are only able to finance their capital needs through family, friends, and credit cards. Without the help of a large extended family and a close community of friends to fund the business, it would not have been possible. Carlos says, “It is all self-help and mutual aid.”

Their first eighteen months have been hard but satisfying. “Gaining the trust of our customers was a big concern. A business like this can succeed only through honesty, perseverance, faith, personal sacrifice, and a ‘grand vision’ – our love of Mexican flavors and our desire to bring these to Seattle’s communities.”

A vast majority – nearly 90% – of all small independent retail businesses are family-owned or operated, and small shops have been the path immigrants have long taken to gain an economic foothold in the US. It is the immigrant entrepreneurial drive that combines the old and the new to bring new flavors to cities like Seattle while at the same time providing familiar “food from home” for those relocated here from countries like Mexico. These family businesses are the “American Dream” – business ownership and community support.

Owners of small shops like Mendoza’s Mexican Mercado are critical to the health of a neighborhood, providing connection and stability.

Explore the diversity of small ethnic markets and restaurants in your community. Give them the support they need against the competition and pressure from the chain stores, Walmart, and other big box stores.

Shopkeepers like Sonia and Carlos bring diversity, flavor, hope, and perseverance to their businesses in contrast to the “franchising of America,” where every city looks – and tastes – like every other city.

Sonia and Carlos need us and we need them!

Mendoza’s Mexican Mercado
Barriga Llena
The Small-Mart Revolution: How Local Businesses Are Beating the Global Competition, by Michael H Shuman
The Mom & Pop Store: True Stories from the Heart of America, by Robert Spector
Encyclopedia of Chicago, Grocery Stores and Supermarkets
Supermarkets as a Natural Oligopoly, Paul B. Ellickson, Duke University, 2004
Walmart by the Numbers
City of Seattle Demographics