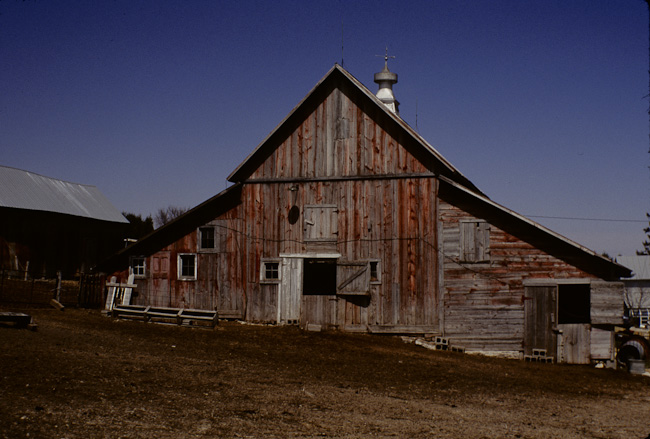 At last, once the sheep went to pasture, the barn renovation got underway. It was quite an undertaking, as my plans called for keeping the overall size of the barn the same, but redoing the interior so I could feed twice as many sheep in the same amount of space.

The old cow manger was rebuilt, and a 6′ x 40′ platform added on one side, which formerly had ended at the inner wall of the lower barn. Ramps were built at each end of the platform to allow access to both levels of the barn.

The platform allowed ewes to feed at both sides of the manger, where previously they could only feed from one side. I could feed 50 ewes at this manger, and there was space at the south end of the platform for a water tank I could feed an additional 30+ ewes at an old manger on the opposite side of the upper barn, giving me an increased feeding capacity for 80+ sheep. If needed, more could be fed by using a couple small hexagon feeders in the space between the two mangers.

Jerry, during a period when he was feeling fairly well, had used his welding ability to put together several of these feeders with a metal frame and a wooden bottom, and they were very handy to have.

A huge part of the renovation was tearing out the entire outside wall of the lower barn, as the boards had been bowed out by all the pressure from years of accumulated manure storage prior to our ownership of the farm.

The bowed out wall caused the roof to collapse to the point that, even though the manure had long since been removed, a person could not walk upright in there. The rock foundation had also crumbled from all the weight placed upon it, and had to be dug out and rebuilt.

I was in luck, as Howard, the head carpenter, had recently torn down an old barn, and recovered quite a lot of good boards, which could be used to replace the torn out wall. This saved me quite a bit of money, as with all the new structures being built at that time, new lumber was very high priced, so I was appreciative of the savings.

It was very exciting and satisfying to me to see the project underway and progressing well. The “fly in the ointment” was that Jerry’s alcoholism was also progressing, and creating quite a problem. He was constantly watching every move the two carpenters made, and then going out and criticizing their work.

I was a nervous wreck, as I feared that one of these times, they would simply throw up their hands and quit! They had already endured enough harassment from him the previous summer, when they were redoing the house foundation.

Jerry had always been a beer drinker, but what had been a couple beers in the evening after work, had during the intervening years of disability from a major heart attack, followed by diabetes, gout attacks, and other issues, become a case of beer every other day.

I, in an effort to keep him off the highway, went to town and got the beer. You might say there was “a method to my madness,” as I was terrified at the thought of him driving drunk and causing a horrible accident… especially after having ridden with him on several occasions in which he constantly drove on the left side of the highway, unless he was approaching a hill, or saw an oncoming car, at which he moved back to the right side of the highway temporarily.

Along with the stress and strain of that situation, I was helping get out SEMSPA’s first Newsletter, “Flock Talk” at the end of May, and along with the rest of the SEMSPA Board, planning informational programs for our membership. The first of these was held in Rochester on July 10, in conjunction with a lamb barbeque.

Along with a class on grading of ewes, with live ewes brought in by a couple of our members, the program featured a guest speaker, Riley Gillette, of Spencer, IA. He spoke about confinement management of a ewe flock, but his second topic was on marketing lambs by TeleAuction, which was being attempted in Iowa. It was proving to be very advantageous to sheep raisers in his area. This was a subject SEMSPA was eager to hear about, as we had been discussing it as a possibility for our group, and were anxious to learn more about it.

At that time, our marketing possibilities were petty much confined to Wilson & Co. at Albert Lea, and the South St. Paul Livestock Market. In other words, we were a captive market, and we pretty much had to take what they offered, except for a few of us that were developing our own market for freezer lambs. This got us a good price for our lambs, but was a lot of extra work.

I found that I could make a very nice profit by selling lambs to individual customers, delivering small loads of 5 or 6 lambs at a time to my locker, where they were custom slaughtered and cut to the individuals order. Then I recovered the lamb pelts… My butcher was very careful not to make any cuts in the pelt when removing it, which was important.

After salting the pelts twice, drying them, and finally having them tanned, I could net an extra $40 per lamb, which was very profitable, but it was also very labor intensive.

A Tele-Auction would be a big boon for our membership, as they would not then be totally reliant on the Albert Lea and St. Paul markets. Our Board of Directors got to work on learning more about Tele-Auctions, and started the wheels turning! At the July 10 meeting, we had 65 member families, and were growing fast with more memberships coming in almost daily!

The barn situation between Jerry, the carpenters, and me, got steadily worse and culminated in a big blowup! Howard, in the interest of saving me money, asked if I knew of any old lumber that they could use as a base floor for the platform. I said I couldn’t think of any, but to look around the granary.

I had completely forgotten about the walnut and butternut lumber we had sawed when we logged our woods at Brownsville, many years before. Most of it had been used up building bookcases, coffee tables, etc., and I had at one time put some blocks under what was left so it wouldn’t be right on the ground in the open south end of the granary.

The blocks had long since pretty much rotted away, and when Howard discovered it, the ends of the boards which had sagged and were touching the ground, were also rotting . He thought he could recover enough to do the sub-floor on the platform, and proceeded to take the usable boards down and start nailing them in place.

I knew nothing about this, of course. They had about 1/3 of the floor down, when Jerry appeared and immediately went into a tirade, declaring in no uncertain terms that this was his lumber, and he didn’t want it used, and “take it back up right now!”

Howard tried to reason with him that the ends of the lumber were rotted off and they were only recovering bits and pieces that were usable, but Jerry would not have it, and they, after some pretty strong language on Jerry’s part, had to take up the boards, and go and buy new lumber.

I had showed up at the barn when the yelling started, and a lot of the bad language was directed at me, who supposedly had told them to use the lumber! After that episode, things went from bad to worse, and at that point I had had all I could stand, and I took the steps needed to commit Jerry to Northwestern Hospital in Minneapolis for treatment of alcoholism and related mental disorders.

He was diagnosed as a “combative psychotic,” and would be undergoing treatment for 4 to 5 weeks. It was a very traumatic time in all our lives! The kids and I would go up for a family counseling session later in August. But first, I had to attend to my sheep business.

By August 5, I had sold one lot of market lambs, but still had 10 freezer lambs to deliver to the locker later in the month. Trying to sort sheep into groups and manage it all with the barn renovation going on was a challenge, and to boot, the rams were being another source of frustration.

They had been on pasture with the ewes and lambs, but as the nights began to cool it was time to pen them up, or face the prospect of January lambs. Of course the ram pen in the lower barn had been dismantled, so my only recourse was to put them in a separate pasture.

After a day, one was back with the ewe flock, so I had to come up with something better, like build a stout fence out of hog panels in the small space between the barn and the granary.

At least things were more peaceful for a short time!