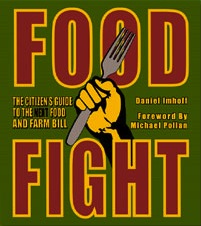 Why the Farm Bill Matters

If you pay taxes, care about the nutritional value of school lunches, worry about biodiversity or the loss of farmland and open space, you have a personal stake in the tens of billions of dollars committed annually to agriculture and food policies.

If you’re concerned about escalating federal budget deficits, the fate of family farmers, a food system dominated by corporations and commodities, conditions of immigrant farm workers, the state of the country’s woodlands, or the marginalization of locally raised organic food and grass-fed meat and dairy products, you should pay attention to the Farm Bill.

Daniel Imhoff began writing about the farm bill before today’s so-called Good Food Movement took hold. In 2007, in an effort to make accessible the giant piece of legislation that touches on everything from food stamps to farm subsidies, Imhoff wrote Food Fight: The Citizen’s Guide to the Next Food and Farm Bill.

Then last year (after editing the influential CAFO Reader), Imhoff revised the book just in time for Congress to craft the 2012 Farm Bill, which narrowly escaped getting passed behind closed doors last fall but is nonetheless shaping up to be “the worst ever.”

Imhoff spoke with Grist recently about democracy, debate, and the multiple ways the farm bill resembles the Olympic Games. Read what he had to say here.

And get your copy of the new edition of Food Fight here. To be informed is to be armed…