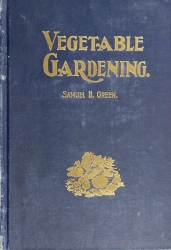 We’ve pulled five books from the GoodFood World library, spanning a critical period in American agriculture – the 1880s through the early 1940s. Before the development of “agro-chemicals” as an off-shoot of chemicals used in both World Wars, farming methods were naturally “organic.” These books, while considered somewhat dated today, are our grandfathers and great-grandfathers teaching us how to care for the land and animals.

Pull a chair up to the fire, have a hot cup of tea, and read away these chilly, rainy spring days!

Donald Mitchell‘s love of the country and farming and viewing, as he did, that it was God‘s appointed duty to work the land and make it produce, prompted him to place the following advertisement in a local newspaper: ”Wanted – A farm, of not less than one hundred acres, and within three hours of the city. It must have a running stream, a southern or eastern slope, not less than twenty acres in wood, and a water view.” My Farm at Edgewood is an account of the realization of Mitchell’s dream.

In Part I of his book he recalls “tender memories of old farm days” and the responses to his advertisement numbered in the hundreds, most to be disposed of immediately. One response captured his fancy to the extent that he resolved to visit the property. And then follows a round of visits and interviews described in a humorous vein and all ending with no property acquired. With a friend he visited a property new New Haven, found that it was the place of his dreams, and within six weeks it became My Farm at Edgewood.

Part II is Taking Reins in Hand. He settles in, begins to fix up and clean up, and decides what to do with the cattle,the bee colony, the farm buildings. All this is written in a folksy humorous style.

Part III becomes a realistic consideration of Crops and Profits. What to do with the hill land, the farm flat, the old orchard, the pears, the soil, the lesser fruits, the grapes, the plums, the peaches, the apricots, the poultry, and his garden. And now he considers debits and credits. Is it profitable? Does it pay?

Part IV – Hindrances and Helps. In Mitchell’s own words; “…I propose, in this last division of my book, to review all the helps and hindrances to the success and the rational enjoyment of a farm-life.”

(Digitized versions are available, as is an 1863 first edition.)

Vegetable Gardening – A Manual on the Growing of Vegetables for Home Use and Marketing, Samuel B Green (Webb Publishing, 1909)

This book was prepared primarily for the School of Agriculture of the University of Minnesota, where it has been used as a text book since it was first published.

It is the result of the development of the system of teaching at this school and is intended for students of the high school grade.

Topics include manures, tillage, seed sowing and growing, marketing, and a calendar of garden operations.

(Available in original hardcover here, and as a reproduction here.)

Knut Hamsun was a Norwegian writer who won the Nobel Peace Prize in literature in 1920. W.W. Worster, Hamsun’s translator, describes the novel, Growth of the Soil:

It is the life story of a man in the wilds, the genesis and gradual development of a homestead, the unit of humanity, in the unfilled, uncleared tracts that still remain in the Norwegian Highlands.

It is an epic of earth; the history of a microcosm. Its dominant note is one of patient strength and simplicity; the mainstay of its working is the tacit, stern, yet loving alliance between Nature and the Man who faces her himself, trusting to himself and her for the physical means of life, and the spiritual contentment with life which she must grant if he be worthy.

Modern man faces Nature only by proxy, or as proxy, through others or for others, and the intimacy is lost. In the wilds the contact is direct and immediate; it is the foothold upon earth, the touch of the soil itself, that gives strength.

The story is epic in its magnitude, in its calm, steady progress and unhurrying rhythm, in its vast and intimate humanity. The author looks upon his characters with a great, all-tolerant sympathy, aloof yet kindly, as a god. A more objective work of fiction it would be hard to find – certainly in what used to be called “the neurasthenic North.”

Five Acres and Independence – A Practical Guide to the Selection and Management of the Small Farm, M.G. Kains (Greenberg, 1942)

Those eagerly embarking down the path to self-sufficiency might find Five Acres and Independence  – first published in 1935 – a good step in the right direction. Granted the information is dated, yet you’ll be surprised at the amount of useful information the book contains.

This classic of the back-to-the-land movement is packed with solid, timeless information. Written by a renowned horticulturist, it has taught generations how to make their land self-sufficient, with explanations of organic farming techniques and reliable advice on other topics, including irrigation, livestock, crops, greenhouses, fertilizers, much more.

Though they grew up on a family farm, neither Ronald Jager, his three brothers nor his sister succeeded their parents and grandparents as farmers. Born in 1933, Jager earned a doctorate at Harvard and taught philosophy at Yale before leaving academia in his forties to become a writer.

And he writes about the farming life of the ’30s and ’40s with a sturdy voice and a keen appreciation for the values he learned from the rigors of farming and from the Dutch immigrant community to which his family belonged.

“My aim in this book,” he writes, “is documentary: to capture and exhibit the experience of being young and on a farm-work and whimsy, warts and all.”

With memory and language, Jager preserves the experience of “being young and on a farm,” lets the facts and details of youth, work and family and community life reconstruct a lost world and its meaning. Vividly, this world takes shape on the page with exuberance, wit and a philosopher’s preoccupation with the relativity of perception.