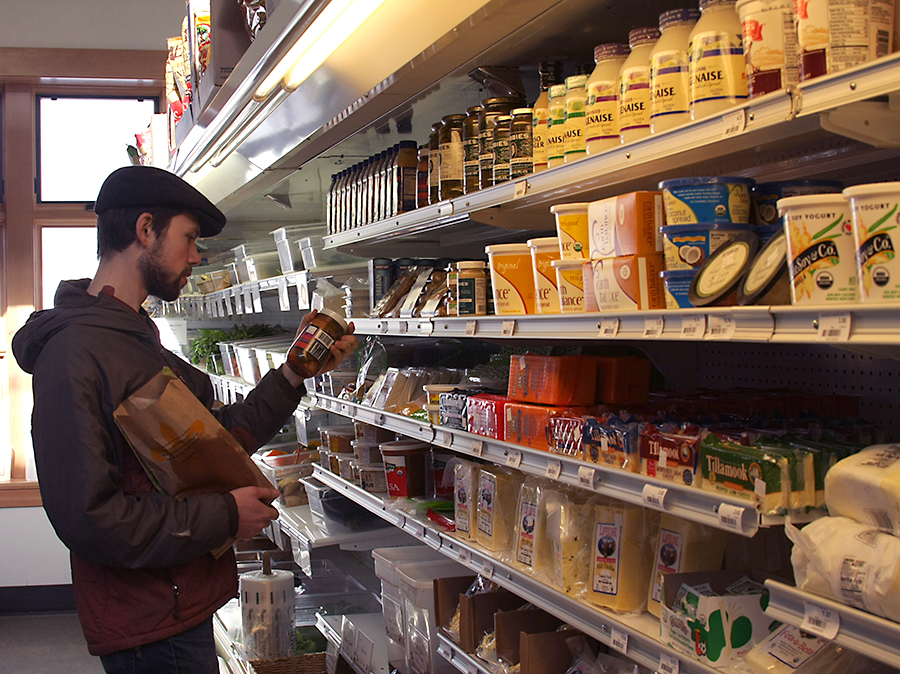 Confession: I have never mapped out a real budget. Not since that mock career class in junior high.

I understand that it helps some people to have solid figures that guide their saving and spending. And I’m not a messy person, but I’ll admit my current budget is framed by loose guidelines and guesswork. That’s not to say I don’t know my limits. I still manage to eat well, pay rent, and have a little leftover. I’m living on a budget… I just don’t have one. Somehow, it works.

I guess I would say that the trick to living on a budget is not allowing yourself to get obsessed with the idea of something. There’s no guarantee that you’ll find said something on a discount rack or sale section. If you can’t be flexible, you’ll end up paying full price.

But if you peruse the sales regularly, you’re bound to find something that you want or need. And since we hunt for bargains on clothes and other items, why not use the same tricks at the grocery store?

There’s a lot to be said for bargain shopping. When you’re choosing something used or worn over shiny new stuff, you’re less a part of the demand for mindless mass-manufacturing. Likewise when it comes to food, you can do your part to lessen the tons of food waste that occurs every year. And you’ll save money by being flexible about what you eat.

Last week on my day off I deliberated for a long time over what dessert to make to feature on my blog. Finally I just went to the grocery store looking for inspiration, and a recipe practically fell into my lap when I saw some discounted rhubarb in the produce bin.

Combined with a few frozen strawberries from our freezer and a pear that had been sitting in our fruit basket for a week, it made the perfect filling for an oatmeal crisp.

A few hours later I pulled it out of the oven… my delicious, bargain-bin dessert. At a cost of 58¢, plus a few ingredients from home which couldn’t have totaled more than $5.

The next time we scored some bell peppers that were only slightly less than perfect, and today a large container of organic salsa that’s “best by” date is in a few days. I’ve learned not to be afraid of “best by” and “sell by” dates – most foods are good for a few weeks after the date specified.

In fact, According to Dana Gunders, a food and agriculture project scientist for the NRDC, these dates are largely unregulated. While some states do regulate their “use by” and “best by” dates, for the most part they’re simply “manufacturer suggestions for peak quality.”

Dating is not required by federal regulation (with the exception of infant formula), and the USDA website on food labeling states that “there are areas of the country where much of the food supply has some type of open date and other areas where almost no food is dated.”

What grocery stores use as a guide for stocking their products, consumers interpret as indicators of food safety. But the best indicator of food safety is your own judgement. Does it smell or taste bad? If so, don’t eat it! But don’t let the date stamped on the bottom decide for you before you even open the package.

If something is years (or months, depending on the product) beyond the date specified, I probably won’t touch it. But if it’s weeks or mere days, I consider it fair game. With perishables, try to eat it within the week. To date I have never gotten sick by using my own judgement when it comes to food.

While big chain groceries are more likely to toss their sub-par goods than put them on display, I’ve had good luck with smaller, local stores. They might have separate areas for discounted produce and dry goods. Another area to look for deals is the freezer section. Our local grocery freezes its discounted meats, so we buy frozen chicken and pork at reduced prices – usually not organic, but all natural and very cheap. The price is usually around $1.99 / lb and two pounds is plenty for several meals.

With that in mind, here’s one easy, cheap, delicious recipe that’s very versatile. I recently made a chicken pot pie with peas, carrots, and onions. Although it looks complicated at a glance, the formula is really simple:  a few cups of cooked meat and/or sauteed veggies in a pie crust, topped with some seasoned gravy, another crust on top and baked in the oven until golden brown.

A perfect (sneaky) way to showcase discounted meat or produce. This would be great with potatoes, root vegetables, broccoli and cheese, and probably anything else you can think of!

Find the recipes for Kate’s sweet and savory pies on her blog: Natural Born Baker