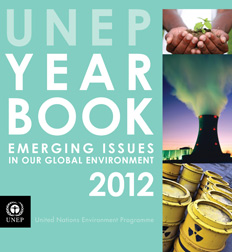 Those of us who are not on the growing end of the food system tend to lose track of the soil which supports production of our food. Even the fish we eat are affected by soil destruction.

A new report from the United Nations Environment Programme (UNEP) tells us that we need to see dramatic improvement in the way we – that is, the world – manages our soils. According to the 2012 UNEP Year Book, we have already damaged nearly a quarter of the global land area. Damaged it enough over the last quarter century that we are already seeing declines in health and productivity as a result of unsustainable land use.

Assessments indicate that some kinds of conventional and intensive agriculture are triggering soil erosion at rates 100 times greater than the rates at which nature can make more.

Why is this important? Soil contains huge amounts of carbon in the form of organic matter that in turn binds the nutrients needed for plant growth and allows rainfall to reach underground aquifers.

Since the 19th century, we have lost an estimated 60% of the carbon stored in soils and vegetation as a result of land use changes like clearing land for agriculture and cities.

The good news is that we can make changes and see improvements:

Learn more about what you can do about maintaining healthy soil to capture and hold carbon dioxide. Get a copy of the report here.