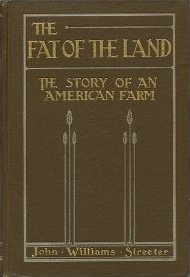 There is a new wave of interest in good food, food you can trust, and food production on all scales. The literature of food and farming go back a long way, and there is a rich literature of food production just beginning to be explored. Here is a selection of books from the GoodFood World library touching on the heart and soul of farming for your late winter reading, during those rainy March evenings.

We start with our first book set in 2BC, when Cato wrote the earliest surviving complete work of Latin prose literature – a book of instruction about the cultivation of vines, olives and fruit, the management of labor (slaves and contract workers), and cookery.

In it are the first recipes to have survived in the Latin language.

This book is first-hand evidence of farming, rural life, and slavery in Italy, more than 2000 years ago, when Rome was almost ready to rule the Mediterranean.

When author Edmund Morris left the Philadelphia business world in the early 1800s and bought a small farm in the New Jersey countryside, he was so pleased with the results of his venture that he decided to tell others how he accomplished it. His simply written chronicle emphasizes that agricultural success depends on not how much you grow, but on what and how.

According to the cover: “Easy to comprehend and intended for anyone who wants to get away from it all, this delightfully written book will captivate Americana enthusiasts, would-be owners of small farms, and anyone drawn to the idea of an agrarian lifestyle.”

The Fat of the Land: The Story of an American Farm, John Williams Streeter (MacMillan Company, 1904)

The copy we have of this book is more than 100 years old, slightly the worse for wear, and yet as inspiring as if it were brand new.

In the first chapter, Streeter says:

By choice and by training I was a physician, and I gloried in my work; but by instinct I was, am, and always shall be, a farmer. All my life I have had visions of farms with flocks and herds, but I did not expect to realize my visions until I came on earth a second time.

This book is out of print and out of copyright; you can learn more about digitized copies of this book here.

During the deepest part of the Great Depression, in 1932, we moved from New York City to a farm in the Green Mountains. This is a book about a twentieth century pioneering venture in a New England community. Most of the subject matter is derived from twenty years of living in the backwoods of Vermont. The book aims to present a technical, economic, sociological, and psychological report on what we tried to do, how we did it, and how well or ill we succeeded in achieving our purposes.

From My Experience – The Pleasures and Miseries of Life on a Farm, Louis Bromfield (Harper Brothers, 1955)

Louis Bromfield is widely known, not only as a writer, but also for his important contributions in the field of agriculture. Since Malabar Farm came into being in 1939, the success of the venture has made it one of the most famous farms in the world. Says Bromfield:

“I have long been aware that much reading on the subject of agriculture is extremely heavy and stuffy and that, in may cases, it consists largely of papers written by one scientist at another and set forth in language so pompous and so technical that the effect becomes lethal.”

This book and his others  – Pleasant Valley, Malabar Farm, and Out of the Earth – are friendly, conversational, and informative!

More about this book here – a slightly newer copy than the one in our library!

We lived and worked for years not many miles from the farm where Ben Logan lived, in the hills of southwestern Wisconsin. Ken and I spent an afternoon with Ben, sharing thoughts about family, farms, and the rolling hills around us.

In the introduction, Logan says:

“Once you have lived on the land, been a partner with its moods, secrets, and seasons, you cannot leave. The living land remembers, touching you in unguarded moments, saying, ‘I am here. You are part of me.'”

At a particularly difficult time in his life, Ken found inspiration in A Place on Earth; let this story touch you too. The front cover notes:

The central character in this novel is not a person but a place: Port Williams, Kentucky, and the farm lands and forests that surround it, and the Kentucky River that runs nearby.

The rhythms of the novel are the rhythms of the land. The novel resonates with variations played on themes of change: looping transitions from war into peace, winter into spring, browning flood destruction into greening fields, absence into presence, lost into found.

An Hour Before Daylight: Memories of a Rural Boyhood, Jimmy Carter (Simon and Schuster, 2001)

In this memoir by our last “farmer” President, Jimmy Carter re-creates his Depression-era boyhood on a Georgia farm, before the civil rights movement that changed it and the country.

Carter writes about the powerful rhythms of countryside and community in a sharecropping economy. His clean and eloquent prose evokes a time when the cycles of life were predictable and simple and the rules were heartbreaking and complex.