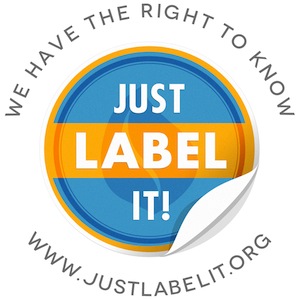 (Copyright by and reproduced with permission from Kamut International.)

Kamut International is a supporter for the “Just Label It: Right to Know” campaign urging the US Department of Food and Drug Administration (FDA) to require mandatory labeling for genetically engineered food.

Genetically engineered food (commonly known as Genetically Modified Organisms or GMOs) are both plant and animal food species modified at the molecular level with genes from a myriad of sources to obtain desired qualities, which commonly include high yield and resistance to drought, disease, or pesticide. Genetic engineering is different from hybridizing because DNA material from a species completely different from the species being modified can be used. For example, genetically engineered salmon have genes that have been modified by adding DNA regulating growth hormones from the “ocean pout,” an eel-like fish. These salmon reach market weight twice as fast as natural salmon.

The concern with genetically modified foods is that there is evidence that modified genes enter into the food chain and have potential to cause unintentional and unknown changes in other organisms. Chinese researchers have recently discovered genetically engineered rice material in human liver cells and have documented that it influences the absorption of cholesterol in the blood.

The current position of the FDA is that these organisms are not materially different from un-modified species. Thus, there is currently no way for you to know if you are consuming genetically engineered food or not. A recent study shows that 99% of Americans support mandatory labeling of genetically engineered (GE) foods. Yet for 20 years, consumers have been denied that right.

Without labeling of genetically engineered foods, informed choices cannot be made about the food we eat. The Just Label It: We Have a Right to Know campaign was created to advocate for the labeling of GE foods.

Kamut International supports the “Just Label It” movement, along with hundreds of partner organizations, to ensure that consumers can make informed food choices and that we are able to protect our food sources long term.

We hope to raise awareness of this issue and encourage consumers to submit comments to the FDA and let Washington know that Americans want labeling of genetically engineered foods.

Please visit www.justlabelit.org for more information and instructions on how to submit your comments to the FDA.