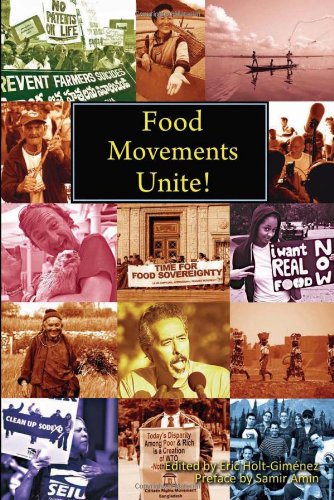 The present corporate food regime dominating the planet’s food systems is environmentally destructive, financially volatile and socially unjust. Though the regime’s contributions to the planet’s four-fold food-fuel-finance and climate crises are well documented, the “solutions” advanced by our national and global institutions reinforce the same destructive technological path, the same global market fundamentalism, and the same unregulated consolidation of corporate power in the food system that brought us the crisis in the first place.

A dynamic global food movement has risen up in the face of this sustained corporate assault on our food systems. Around the world, local food justice activists have taken back pieces of the food system through local gardening, organic farming, community-supported agriculture, farmers markets, and locally-owned processing and retail operations. Food sovereignty advocates have organized locally and internationally for land reform, the end of destructive free trade agreements, and support for family farmers, women and peasants. Protests against—and viable alternatives to—the expansion of GMOs, agrofuels, land grabs and the oligopolistic control of our food, are growing everywhere every day, giving the impression that food movements are literally “breaking through the asphalt” of a reified corporate food regime.

The social and political convergence of the “practitioners” and “advocates” in these food movements is also well underway, as evidenced by the growing trend in local-regional food policy councils in the US, coalitions for food sovereignty spreading across Latin America, Africa, Asia and Europe, and the increasing attention to practical-political solutions to the food crisis appearing in academic literature and the popular media. The global food movement springs from strong commitments to food justice, food democracy and food sovereignty on the part of thousands of farmers unions, consumer groups, faith-based, civil society and community organizations across the urban-rural and north-south divides of our food systems. This magnificent “movement of movements” is widespread, highly diverse, refreshingly creative—and politically amorphous.

Many publications point to the hopeful initiatives in food production-processing-distribution and consumption; and many analyses unpack and identify the structural impediments to a fair and sustainable food system. However, there has been little strategic reflection on just how to get from where we are: a broad but marginalized collection of hopeful alternatives—to where we need to be: the norm. Unfortunately, social, environmental and economic visions of what a good food system should look like are rarely accompanied by a clear political vision of how to roll back the corporate food regime and rollout the transformation of the world’s food system.

Food Movements Unite! is a collection of essays by food movement leaders from around the world that all seek to answer the perennial political question: What is to be done?

The answers—from the multiple perspectives of community food security activists, peasants and family farm leaders, labor activists, and leading food systems analysts—lay out convergent strategies for the fair, sustainable, and democratic transformation of our food systems. Authors address the corporate food regime head on, arguing persuasively not only for specific changes to the way our food is produced, processed, distributed and consumed, but specifying how these changes may come about, politically.

Click on the cover to buy a copy of this book.