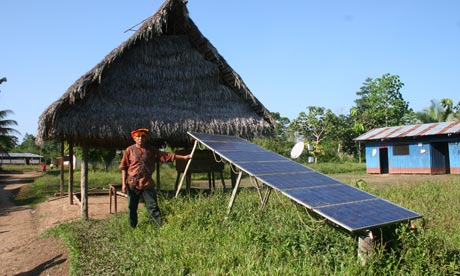 Going “off the grid” has connotations of romance and counter-culture in the US, but to 600 communities across rural Latin America, off the grid means they will remain poor and under-developed.

Imagine what can happen when each community is given solar panels and, in some cases, a back-up wind generator to produce renewable and clean energy.

Now residents in each location have power enough for five laptop computers, a printer-scanner, a multimedia projector, an antenna for satellite internet connection, a refrigerator, a water purifier and a battery charger.

Simple things such as charging a mobile phone or emailing medical lab tests to a central hospital can now be done. Farmers and food processors will also have access to markets and suppliers on the Internet.

Read the rest of the story here.