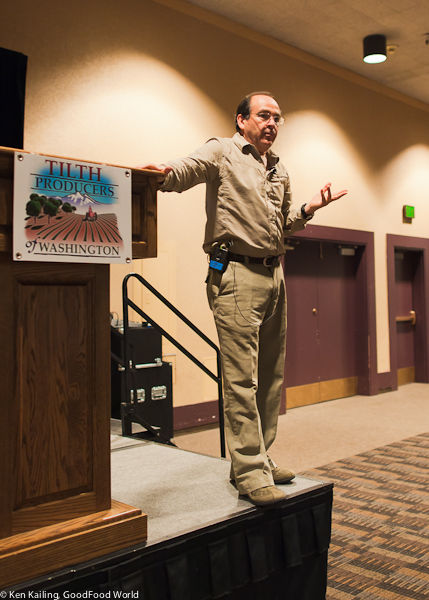 (Ed. Note: Miguel Altieri was a keynote speaker at the 2011 Tilth Producers of Washington Conference, on November 12, 2011. Altieri is a Professor of Agroecology at the University of California, Berkeley in the Department of Environmental Science, Policy and Management. He received a BS in Agronomy from the University of Chile and holds a Ph.D. in Entomology from the University of Florida. He teaches courses in agroecology, agroforestry and urban agriculture. Altieri is an advocate of sustainable agriculture and is highly critical of large agribusiness corporations such as Cargill, Monsanto, and ADM. He conducts most of his research in California and Chile working closely with farmers and workers to implement principles of integrated pest management, biological control, and other sustainable practices.)

“Crises have come about on our planet because we are following an economic model.
We must design a new agriculture for a changing planet…”
Miguel Altieri 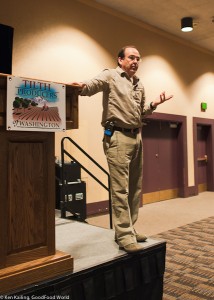 The highlight of the Tilth Producers of Washington Conference was the keynote delivered by professor Miguel Altieri of the Department of Environmental Science, Policy & Management, at the University of California. His specialty – agroecology — combines agriculture, the science of cultivating the land and raising livestock; with the principles of ecology, the study of the relationship between living organisms and their environments.

Altieri began with a series of startling statistics proving that when measured in total output small scale indigenous agriculture is actually more productive than industrialized agribusiness.

“There is a huge myth that big industrial farms produce more food than small farmers. No!” he said. (Data is available at foodfirst.org.) Wendell Berry put his finger on it when he said, “Agri-business has given us massive soil erosion and degradation, water pollution, maritime hypoxic zones; destroyed rural communities and cultures; reduced our farming population almost to disappearance; and yielded toxic food. .  .”

In the business world, these are called  “externalized costs” or “externalities” — that is, costs which must be borne by society as a whole, which are neither reflected in the cost of the product nor paid for by the company making the profit. One undeniable example: industrialized soy and corn production is not only subsidized by U.S. taxpayers but has given us unprecedented rates of obesity and childhood diabetes. 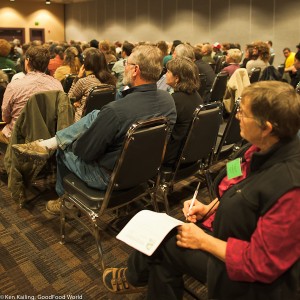 As Altieri said, “Our natural systems are collapsing. We are seeing deforestation and topsoil erosion on our land; fresh water scarcity; and our fisheries are in danger. Associated with these ecological issues are socio-economic problems. Food availability is the link between the social and the ecological. As fertilizer and petroleum prices go up, world food costs have followed,” he added, showing another data stream.

Major corporations now control both the seeds for food production (primarily Monsanto, Sygenta and Dupont) and fertilizer (Cargill, ADM, and Bunge). “Basically we have an agriculture without farmers. They are prisoners,” Altieri said.

In past eras, farmers saved their own seed from crops adapted year after year to their particular climate. Now commercial seed are hybrids which do not reproduce. Further, most hybrids are patented. (For the full story, check out the Organic Seed Alliance site.)

Add to that the biofuels movement (biomass being used for fuel production in lieu of petrochemicals) and we humans have a perfect storm: the agro-industrial convergence that leaves one billion people on our planet hungry. Altieri noted that “If all the corn production in the US were used for ethanol it would satisfy only 12% of our energy needs”—so why are we even going down that path? 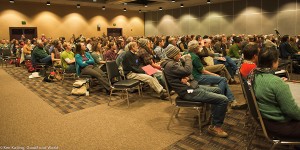 Another quiet crime against humanity is happening right in front of our eyes in what Altieri calls a “land grab” in South America and Africa. The big boys, mentioned above, can see the writing on the wall: the end of this century is going to be about food (and water) scarcity. So corporations want to secure their control over the most basic human needs by adding land for food production to their seed and fertilizer monopolies. The future of the seven billion (and counting) people on planet earth is not a pretty picture.

As a counter to these disastrous trends, professor Altieri has made it his job to study with indigenous peoples. Though “Camepsino” has no real equivalent in English, Altieri uses the term “peasants” to talk about the indigenous farmers who are doing it right. “In the Andes, they have been farming for 5,000 years with the same systems — I call that sustainable!” he said. 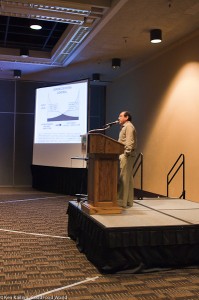 The Andean terraces have well understood micro-climates charted and named (“Kichwa fuerte,” “Kichwa,” “Jalka,” and “Templado”) just as Native Hawai’ians understood that families needed pie-shaped wedges, from the top of the island to the sea, in order to tend and have access to papaya, avocado, taro, and fish.

Western-style industrialized agriculture is replacing these traditional systems around the world. “In Asia, in the Philippines and China, where people were growing rice, fish, eels, ducks and trees with very intricate interactions — these systems have been converted to monoculture.”

Altieri has studied these “peasant practices” passed down for generations and shown that the interactions have a scientific basis resulting in greater output and increased resilience. He and fellow scientists have also shown that in many indigenous cultures “weeds” have medicinal and nutritional value. Biodiversity is not just a buzzword; it is a critical component of peasant agriculture.

“50 % of the world’s food today is coming from small farmers. There are 1.5 million farmers working on 380 million small farms and we need to follow their lead. We need to decouple our agriculture from its dependence on fossil fuels and create, or recreate, multi-functional local food systems with high biodiversity.”

Gable, a professor at Bainbridge Graduate Institute, is the author of Strategic Action Planning NOW! (St. Lucie Press); a weekly columnist for the Chinook Observer; and has won both the Dolly Connelly Award for Journalism and the Environment and the Grantham Prize for Excellence in Environmental Reporting.

She is the vice president of the Washington State Tilth and president of her local chapter, Tilth on the Willapa.

After two decades in Berkeley, CA, Gable resides in the rural southwest corner of the Washington coast where she tends a rescue Chihuahua, a lop-rex rabbit and a ukulele.