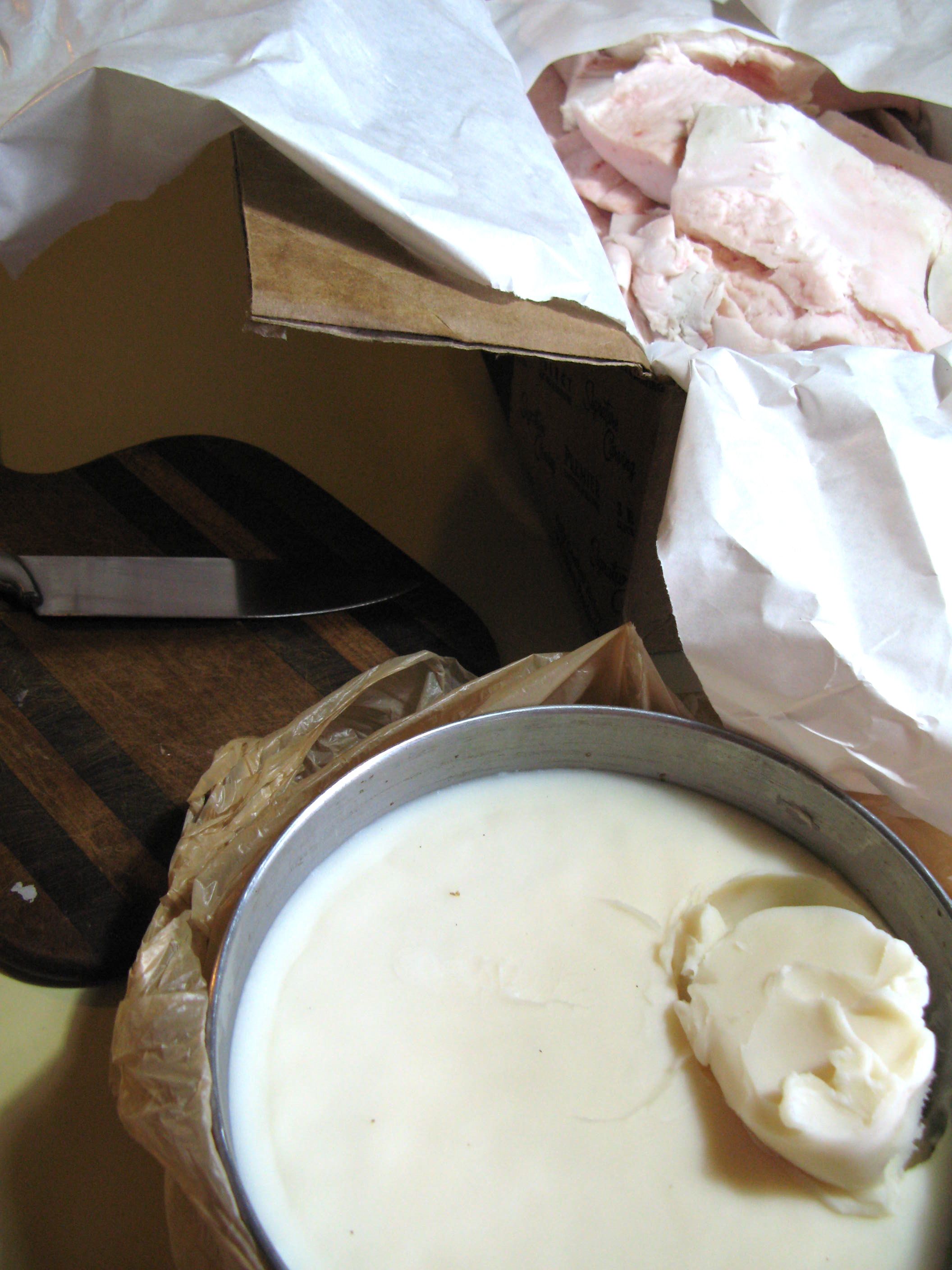 The idea of using the fat from locally sourced meat animals is new to me, as it would be to others who have grown up buying shrink-wrapped meats. Even buying from a local farm doesn’t mean you’ll see the whole animal, so when the butcher who processed our last hog asked, “Do you want the fat?” I said yes before thinking about it.

Of course I wanted to try using another part of the animal. I thought of it as honoring the animal by making good use of as much of it as I could. I even asked for the feet, but that story will have wait. I found out that the fat presented a big task for a novice renderer. 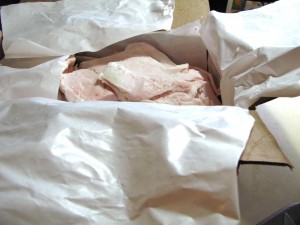 In case you don’t know, pig fat is called lard, and rendering or clarifying is necessary to separate the fat from the bits of meat and connective tissue that run through it. The rendered fat is softer, too, so it’s easier to measure the amount you want to use.

The pig fat came in a cardboard box and weighed nearly 20 pounds. This took up a big spot in my freezer and seemed to glare at me, challenging me to figure out how to handle its huge mass. Eventually, having read instructions several times, I pulled out the box, fat still frozen, and began prying pieces off the top. Dice it, the instructions said.

This dicing worked pretty well until my hands, cutting board, and knife handle were completely coated with fat. The slippery knife sliced into my finger and I decided that I’d diced enough for a first try, since the bleeding didn’t want to stop. This was a little frustrating, but I forged ahead.

I put the small pieces of fat – about 5 pounds – into a roasting pan with a little water and then put the pan into a 300° oven. The goal was to get all the fat into liquid form and then pour it through cheesecloth (which I found still available at a local hardware store), then cover and refrigerate the fat. Cooking the fat took about six hours – and the fragrance of roasting meat filled the house.

Picture a pan of boiling fat with browned bits floating in it, like the crisp outside of a nice roast. The crisp bits are called cracklin’s and can be eaten, used for flavoring (but I don’t know how or of what), or, in my case, fed to the chickens. 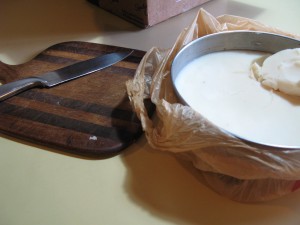 Pouring and straining the fat was the easiest part of the whole job, and I ended up with 3.5 pounds of lovely, clean lard with a consistency softer than Crisco. I still have almost 14 pounds of fat to dice, cook for hours, and strain, but my husband offered to help, so the project seems a little more manageable with two. Also, I know to be a bit more careful about greasy knives and hands.

What, you may ask, will I do with this fat? I’ll make soap, I say. Soap, made with lye. That sounds even more thrilling than a greasy knife. I can hardly wait. My mother did it, back in the day, and I’m sure I can too. But, if I didn’t want soap I could cook with it. Once the lard has become soap I’ll work on how to use the trotters, or lower legs and feet of the pig.

During my explorations into utilizing fat, I learned that duck fat is delicious in baked dishes like apple crisp, and one advantage to duck fat is the smaller amount. I got about 1.5 cups of fat from one roasted duck rather than 20 pounds, so skimming it off the water is simplicity itself. I have lamb fat in my freezer and again, the quantity looks so much more manageable than the box from the pig butcher that I have no qualms about rendering it.

My gratitude for having a freezer is vast as I picture having to organize using all these animal parts right as the butchering happened on the farm. Back before freezers you either made all the parts storable right away (smoking, brining, pickling, etc.), ate what you could, or the meat would spoil.

If you’re interested in trying to render fat there are detailed instructions online, or you can email me if you have questions. I’ve been told that pie crust made with lard is flaky and wonderful, so let’s render.

Susan W. Clark is a freelance writer and photographer focusing on sustainability. She lives on an organic farm near Canby, Oregon. Her blog, publication list, and clips are available here.