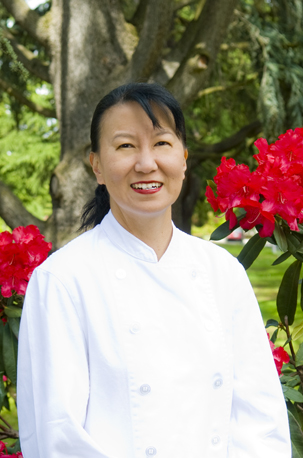 Visiting Allium Restaurant on Orcas Island is much like having dinner at Lisa Nakamura’s house. The restaurant is small – seating about 35 – and there are just two in the kitchen: Lisa and Anna Harlow. The two met at the Herbfarm, Woodinville WA, where Lisa was Chef de Cuisine and Anna was Pastry Chef. Nakamura launched Allium in 2010, and the world noticed!

Chef Nakamura generously answered questions for GoodFood World, and here are a few insights into her philosophies, business practices, and management style.

GoodFood World: Let’s start with a simple – or not so simple – definition of good food. What is it?

Lisa: It tastes good. There’s something ineffable about it; it’s got heart. There are those who would say that McDonald’s French fries taste good, but there’s something more behind it.

What makes food good is something that comes through the chef’s or cook’s fingertips; the intent behind the meal.

GoodFood World: You opened Allium in May of 2010 and it seems you’ve been “discovered!” What has the spotlight meant to you?

Lisa:  Yes, we’ve gotten a lot of press, however with a lot of exposure comes higher expectations. For the most part, people who come here have made a trip to come to this restaurant. Perhaps because of the press, perhaps because their friends have been here, or maybe because they understand what we’re trying to do.

When people come, I don’t want to disappoint. Our food is very simple. First, it has to be, in some respects, because I’m the only person cooking the hot food; logistically it has to be simple. Second, I don’t think good food has to be complicated. You shouldn’t put 20 things on a plate. Good food is simple.

Allium has gotten a lot of press, for which I’m grateful. We’re just trying to live up to it, one plate at a time.

GoodFood World: Part of your recognition has been as a “farm-to-table” restaurant, as a chef who buys from local farmers and fishermen. Was that part of your plan?

Lisa: I’ll be honest, when I opened this restaurant, I didn’t go out to be a farm-to-table restaurant. I just wanted to open a restaurant where I could buy from people face-to-face, on a local basis. It’s a very different premise.

Yes, I want to serve good food. Yes, I want to serve wholesome food. But I never intended to be specifically a farm-to-table restaurant; it actually happened because the farms are just down the street. I really want the best and the local farms and fishermen happen to provide the best.

GoodFood World: Let’s talk more about your perspective about connecting producers and buyers. How do you want to buy food? How do you want a producer to approach you? What is important for them to say or do for this to work?

Lisa: For me the most important thing is whether my prospective supplier is someone I can trust. Do they have a good reputation? If something goes wrong will they fix it in a way that is appropriate? I trust my gut instinct, a lot.

Price is important, of course. As much as I would like to be 100% organic, it’s expensive. My food costs should be no more than 30%, and that’s a challenge. I have to wonder if someone will pay more for this plate of food knowing that it’s organic or do they really care?

If I don’t get a good feeling, and I don’t think the person is trustworthy. I won’t buy, or I might only purchase once just to try it out. I’m looking for cleanliness, promptness, price, quality, deliverability, and a good relationship.

There’s someone on the island that I don’t purchase from. I was warned that this person shorts on weights. One time when the delivery was late, and I called to ask about it, I was yelled at. That’s not good business.

It’s about relationships. For example, I get my clams from Rick Jones, here on the island. I cook 20 pounds at a time and if one is bad, I have to throw out the whole batch. Once that happened and when I called about it, Rick told me they had made some changes in their handling. He said that until I was happy, all my clams would be free.

Now, I wasn’t looking for anything free, I just really appreciated the conversation. I’m looking for someone who will be a partner, not just a supplier.

GoodFood World: What about seasonality, weather changes, water changes – all that challenges you to be creative, doesn’t it?

Lisa: Yes, and in some ways it is kind of easy because the restaurant is so small. We’re not constrained by a huge published menu that we have to honor; I can print a new menu in the afternoon if I need to.

Also I have some flexibility because it’s just me. I don’t have to go through layers of bureaucracy to make a change. I just have to remember to tell the wait staff…

Our food sources change from season to season and even during the season it changes. Produce can be different at the end of the week from what it was like at the beginning. The weather may change and it’s still sugar snap peas but they don’t taste the same.

I have an opportunity to educate, but it’s a hard thing to teach someone in the span of a mealtime. It’s easier when they ask. For instance if they ask why there are no tomatoes, I can explain the seasonality of tomatoes.

For me, it’s about when they say, ”Wow, this is really good.” Then I can tell them about where we get our food, the source.

GoodFood World: You’ve had some really wonderful mentoring experiences during your career. I know you can’t mentor someone in a few minutes like this, but what advice would you give to someone coming up through the system now, to someone who wants to do something special like you did?

Lisa: When I first started looking into cooking, I wrote letters to pretty much all of Food and Wine’s top new chefs of the year. I remember one in particular, Charles Wiley.

Mr. Wiley called me and spoke with me for 45 minutes. He said, “If it’s a choice between getting a better paying job at a Ruby Tuesday’s or working for free at Chez Panisse, go for Chez Panisse. Get into the best restaurant you can. Even if you’re just washing lettuce or washing dishes, keep your eyes open. Eventually you’ll get a chance to move up, and what you will learn from that experience in your formative years is irreplaceable. The money will come later.”

I recently had a young cook ask me a similar question. He was being presented a fantastic opportunity for advancement, and I said, “I can see it’s pretty tempting and, if that’s what you’d really like to do, great! But my sense is that’s not where your heart is. You want to cook.”

Get yourself into the best restaurant you can. It may mean you’ll be poor for a few years, but it will be invaluable.