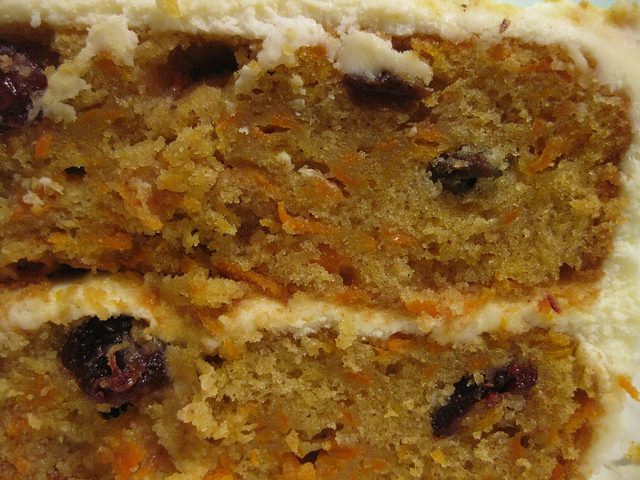 Introduction: I decided I wanted to trace all the ingredients of my homemade carrot cake, from ground to place, and write a book about it. This excerpt from The Carrot Cake, continues from Part One where we began tracing the life of a carrot from seed to plate. 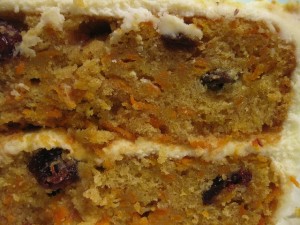 The bagged carrots–called cello carrots–have a whole different harvesting story from the carrots with their tops left on. 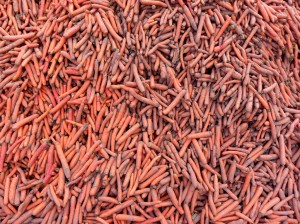 Mid-size to large farmers use a carrot harvester for the cello carrots. I asked David Vogel at Vogel Engineering Inc. to explain their carrot harvesting machine to me. I had seen videos of them, but I couldn’t tell how they worked. (They made a bit more sense than the carrot seeder to me.)

In California alone, they harvest 20 million hundred-weight fresh carrots this way per year. (Hundred weight is a hundred pounds.)

After they’re harvested, they’re taken to a processor/shipper. I talked to Jerry Munson, the manager of the California Fresh Carrot Advisory Board, about this part of the process.

He told me that the carrots are often taken to a receiving station away from the processing plant where they flush the dirt from the carrots with water. Then the carrots are taken to a shipper (processor–same thing). Once there, the carrots are rinsed in a chlorinated wash. They’re put on a conveyor belt, still in water, and workers sort them by size and throw out the crooked ones. 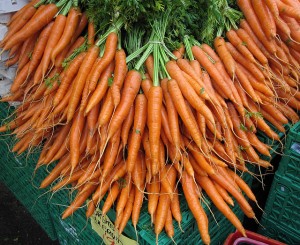 I was still confused about some things about this process, I called Chris Harris, produce merchandizer and local buyer for New Seasons Market in Portland. I asked him if he or someone at New Seasons visited the farms they worked with before entering into a relationship with them.

He said that was one of the first things he did.

“Generally our partnerships start small and then grow over time,” he said. “We try to work with growers who are passionate about what they do and who are most interested in the quality of their products. So quality is our number one concern. We also are very interested in supporting organic and sustainable farming practices. We do rely on third party certification for organic status. We have less opportunity to visit growers who are farther away, so we tend to rely more on third parties.”

He also said that because of the season (we had this discussion in November), they were transitioning away from local to get more carrots from Grimmway and other California companies. Normally they try to buy direct and more locally. They have partnered with Organically Grown Foods, which acts as a wholesaler.

So if the customer or the store didn’t get the produce directly from the farmers, this was how the carrot food chain looked like: The carrot went from the farmer (who plants and harvests them), to the producer/shipper (like Grimmway) who cleans and processes them, to a wholesaler (like Organically Grown Foods) to a market (like New Seasons) and then to my (or your) kitchen.

This was all fascinating to me, but what a lot of work to find out where my carrots came from. And I had gone the easy route: I had asked the natural food grocery store where I shopped to help me. They were dedicated to sustainable farming, and to transparency with their customers. And I had only investigated organic carrots. What if the average person just wanted to find out where their carrots came from?

I called Safeway. At one store, the produce person was running the cash register and couldn’t talk because they were very busy. At another Safeway, the manager of the store didn’t know where they got their carrots, but he transferred my call to the produce department. A young woman there said she didn’t know, but she set down the phone and went and checked. She came back and said, “They’re from California and they’re the Safeway brand. The warehouse could give you more information maybe.”

I called the warehouse, but it was the wrong number.

I was done. I figured I knew enough about the life of a carrot that hadn’t been grown in my garden.

Now, it was time to move on from carrots to the rest of the ingredients in my carrot cake.

Kim Antieau lives in the Columbia River Gorge in a small town in Washington state. She has a graduate certificate in Sustainable Food Systems and Permaculture Design from Antioch University in Seattle.

Kim is a novelist, researcher, activist, and librarian. She is the author of several published books, including eight novels. Not surprisingly, many of her novels revolve around food and community and Kim recently launched the Skamania Permaculture Guild.

Her new novel, The Fish Wife, is due out this fall. Kim is currently working on The Carrot Cake Book and the novel Butch.