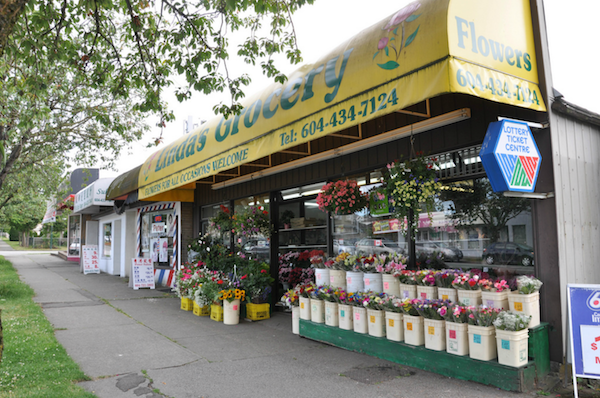 Notice how the retailers’ pledge initiative recounted in Big Retailers Make Pledge of Stores for ‘Food Deserts,’ (The New York Times, July 20, 2011) is entirely top-down and makes no mention of empowering local neighborhoods to support their own independent grocers?

The commitment to open or expand 1,500 stores in communities presently having limited access to nutritious food was gotten from Walmart, Walgreens, SuperValu and other big enterprises by Michelle Obama’s campaign, Partnership for a Healthier America, at the White House earlier this month. A major intent of the program is to reduce childhood obesity, which is thought to result from the children’s lack of access to good food.

On the surface, the corporate endorsement of the program appears well intended. Nevertheless, there is a great deal going unsaid in the discussion. In fact, it is amazing so few journalists have gone up against the chain stores to report on the real loss of human and natural resources involved in this campaign.

Stacy Mitchell writing for Grist argues that independent grocers should rightfully have been the focus of the program since independent food retailers, including farmers markets, food cooperatives, and direct sellers have been the first to appreciate and attempt to remedy food disparity in low income urban areas.

Think twice. When have corporations ever done anything truly in the public interest? Of course stores like Walmart and SuperValu will move back into blighted urban areas to expand their market share as long as they can get subsidized and as long as they can keep control of food sales.

My personal grocery experience causes me to be very suspicious of Ms. Obama’s alliance with Walmart. I worked off-school hours throughout my high school years in a small family-owned grocery store.

In the mid-fifties, our independent urban-fringe market was threatened by not one, but four supermarket chains. Very shortly, union busting and trucker strikes (the Teamsters) moved in out in front so we couldn’t even get to work.

Only 15, I saw scab drivers getting clubbed in the new parking lots. Of course, in no time, the suburbs grew out and the strip malls filled in. Then came the mega shopping centers; we got the first one – Southdale – in Edina, Minnesota.

It didn’t take long, already by 1960, downtown Minneapolis and St. Paul had deteriorated and the union battles of the times turned into race riots. Yet, somehow, our little grocery store endured on the faithful purchases of its long-term customers, even as the village where it was situated disappeared to be replaced by a major highway interchange, miles of asphalt parking lots, billboards, litter, smelly gas stations (as many as the shopping centers), banks, A&W drive up, and roadway blight.

In the store, fresh local farm produce was replaced with wilted and cellophane wrapped greens trucked in by new food distributors. Our local vegetable farms in the Minnesota River valley were inundated with mud washed down from construction sites; local upland orchards and melon patches were bulldozed for postwar housing tracts.

As I recall those adolescent years, it is fascinating to me that the corporations which played an active part in creating “food deserts” in the first place are now being encouraged by Michelle Obama to reinvest in the same blighted areas they created.

What is even more alarming is that rather than affording an opportunity for the people who live in these degraded areas to rediscover a healthy, empowering food base of their own, they are going to be subjected to more of the dysfunctional elements intrinsic to the corporate culture that continues to dominate them.

Let’s be honest; if we’re talking about inequality in a fair distribution of food, everything about corporations is – and continues to be – discriminatory. In fact, history shows discrimination in companies like Walmart goes all the way back to the original thinking of the founders. Many chains in America have strong roots in a segregated South. Blacks migrating to northern cities after the War took over the small family business functions left by whites moving to the suburbs.

Also, the marketing structures of supermarkets restrict diversity and ethnic and racial creativity. The machine age is reductionist; the new store is a machine.

Television told us, “Progress is our most important product,” and that we were moving into a modern age far beyond our imaginations where we would become occupied with entertainment and leisure. Machines would serve us and drudgery (really honest physical work) would be a curse of the past.

Sugar Frosted Flakes and Tang Orange Drink replaced whole grain cereals and ripe juicy oranges. Even the smell of our home grocery was gone because of the new enforced sanitation (including regular DDT spraying of the rear loading dock, etc.).

We were caused to look at small family food businesses as being out of date, even unsafe and dirty. But with the new super stores, wages stagnated and workers at all levels lost self-esteem. Ironically, those impacted most negatively by modernism (after the war transfer of industrial technology to the business sector, especially chemicals) were the black minorities.

Urban sprawl occurred overnight and it wasn’t long before inner city ghettos spawned by suburban flight and disproportionate investment, like those in Detroit, started burning.

It’s wonderful that our First Lady wants to eliminate food deserts in low-income neighborhoods but enabling corporations built on exploitation like Walmart is not the way to go about it.

A much better way might be to discourage further usury of the people in these areas outright; then to invest to repair infrastructure, to create local land use opportunity, to educate local food businesses to grow, process and sell “good food” independently, and to invest with appropriate low-interest loans.

The irony now is that many well meaning NGOs are persuaded to endorse exclusionary top-down food initiatives like Michelle’s because they receive money from the same corporations backing the programs. And they all have one “myth” in common – that we need technological efficiency to feed the people and require an economic model based on growth.

Unfortunately, their formula doesn’t allow individual initiative and self-enterprise on a small scale. They fail to acknowledge that corporate thinking has caused all of the problems of this “modern” age – over-population (caused by industrialization, not cured by it), depression, climate change, pollution, and the destruction of natural ecosystems that support us.

Walmart moving into the inner city is like a snake eating its tail. Alternatively, the re-institution of small, independently owned, local food businesses may be our only means of survival. Further, we must see that corporations like Walmart own no special advantage once the undeserved subsidies are eliminated. There is an economy of scale in being small and local that investors lie about.

And, ultimately, any real “science” useful to corporations would be that much more useful to independent corner stores. It is not a question of science, or the appropriate use of science (technology), or the limit of scale – it is an issue of moral conscience.