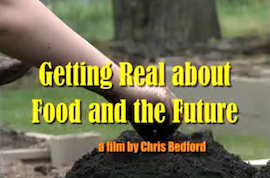 This video was released by Chris Bedford just about a month before he died on June 15th. Here is how he described it:

I have just completed a 30 minute film designed to help communities and neighborhoods take the first steps towards food security and a thriving economic future in the Post-Petroleum era. “Getting Real about Food & the Future” (GRAFF) is designed for organizing and action, not just discussion. It emphasizes solutions and answers to the deepest problems of transition to the new food economy. GRAFF features the wisdom of John McKnight, Bill McDonough, Lester Brown, David Korten, Bob Costanza, Ted Schettler and others.

One of Bedford’s passions was bringing healthy, locally-grown food to school lunchrooms. He helped organize Muskegon (Michigan) Area Advocates for Healthy School Meals, which spoke to the Mona Shores and Montague school boards about serving more fruits and vegetables, specifically those grown by local farmers. Doing so would stimulate the economy, reduce the rate of obesity-related diseases and help children perform better in school, he said, leading to a stronger community overall.

He was also known for the documentary films he directed over his 25-year career, including environmental films “The Next Industrial Revolution,” “The Organic Opportunity” and “What Will We Eat?”