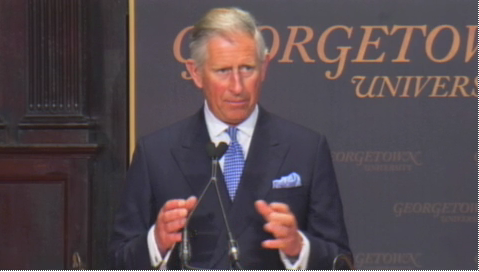 The Future of Food Conference brought together many of the world’s leading experts on food, including Prince Charles, the Prince of Wales, a lifelong environmentalist and organic farmer; Eric Schlosser, author of “Fast Food Nation;” and Wendell Berry, winner of The National Humanities Medal.

Academics, NGOs and experts from some of world’s biggest food companies discussed trends in agriculture and consumer behavior that is shaping the future of food.

An archived selection of presentations is available here, including a video of Prince Charles’ keynote.

Prince Charles in his speech discussed many of the problems currently facing food production and advocated for a swifter and more direct move toward more sustainable, or “durable,” as he called it, systems. Pointing out the many dangers caused by an industrial farming system that depletes natural resources and impairs biodiversity, he argued that we cannot afford to continue operating under the current system for very much longer before it starts to fall apart. In order to foster the necessary change, the Prince said that agricultural policy, in the U.S. and around the developed world, needs a drastic overhaul in order to incentivize and reward farmers undertaking positive change. The current system actually penalizes farmers and food utilizing sustainable methods while paying huge sums of money to farmers who plant monocultures of corn and soybeans on every available strip of bare land, he said.

More about the conference at Beyond Pesticides, a coalition against the misuse of pesticides.