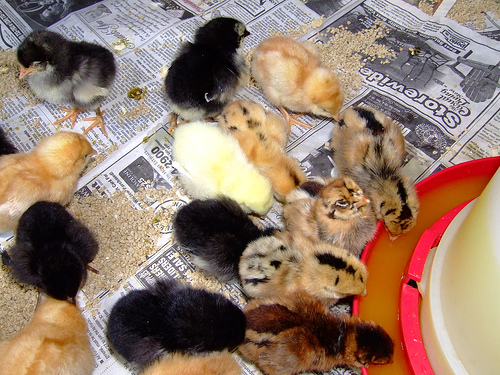 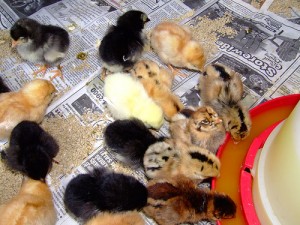 Muffled peeps are a clue that something special is happening. And the sounds get louder and louder, until… there are chicks!

A hen lays an egg a day – or sometimes every other day – and it generally takes 21 days until the chick hatches. So how does she make sure they all hatch at the same time?

It’s done by controlling the temperature. She make sure the eggs stay cool until the nest is full, then she begins to sit on them to slowly bring up the temperature and humidity. The hen regularly rolls them to prevent the developing chick from sticking to the shell and hatching with physical defects.

A mechanical incubator resembles nothing more than an oven, and at first it seems the eggs must be cooking rather than growing chicks. The temperature must be kept at 99.5 degrees and the humidity kept at 60-65% until the last three days when it’s raised to 80-85%. (Think hot yoga!) The shelves are slowly tipped back and forth to roll the eggs.

Soon little holes start appearing in the shells and the chicks begin to peep. Slowly they break their way through the shells, with long periods of rest between the efforts.

In the end, a very tired, wet little chick sheds the last of the shell fragments and – after more naps – fluffs up to face the world with the rest of his/her nest mates.