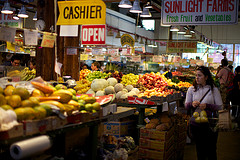 Granville Island, Vancouver BC, is a artistic, cultural, and retail center built on the banks of the False Creek, opposite Vancouver’s downtown center.